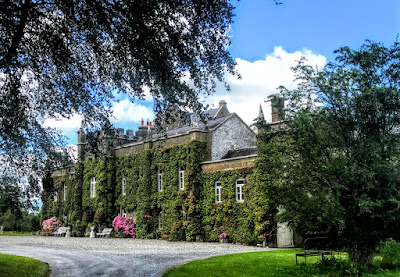 At the weekend, I visited the churches and villages at Broadford and Dromcollogher in West Limerick. But these were added bonuses on way to and from Springfield Castle, where two of us had lunch in the Green Room Café on Saturday afternoon.

Springfield Castle is an impressive country house in a picturesque location, with extensive panoramic views of the surrounding countryside of West Limerick and north Cork.

The house and courtyard complex are the ancestral home of Lord and Lady Muskerry and occupies the site of an old bawn associated with the 16th-century tower house. 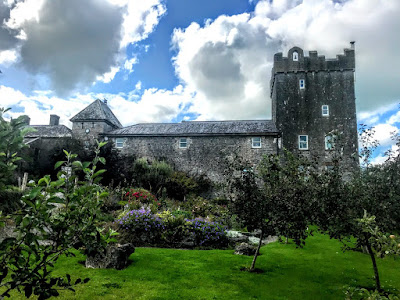 A curious mechanised clock controlling a mechanical calendar, lunar calendar and a bell constructed by the current owner’s great-grand uncle is a mechanical masterpiece of great technical interest.

Springfield Castle is an elegant historic Irish castle. Steeped in history, it is the ancestral home of Lord and Lady Muskerry. Their motto, Forti et fideli nihil dificile, ‘Nothing is Difficult to the Brave and Faithful,’ underlies over 700 years of family history.

The earliest castle at Gort na Tiobrad, the Irish name for Springfield Castle, is reputed to date from 1280, when one of the FitzGeralds, a junior member of the Desmond family, married a woman from the O Coilleain family, who were the Lords of Claonghlais. He later built a castle at Springfield.

Little is known of this castle, but it is said some of the ruins on the north of the present courtyards may incorporate remnants of this castle.

In their day, the FitzGeralds were patrons to Irish poets and musicians. At the gateway to Springfield Castle, a plaque on the wall commemorates Daithi O Bruadair, a 17th century Irish poet who lived at the castle with his patrons, the FitzGerald family, recording their lives and family events. He described Springfield Castle as ‘a mansion abounding in poetry, prizes and people.’

The FitzGerald family had their lands confiscated for the third and last time in 1691 after the Treaty of Limerick. Sir John FitzGerald went into exile in France with Patrick Sarsfield; he never returned to Ireland and was killed in battle in Oudenarde in 1708.

William FitzMaurice, a younger son of the 20th Lord of Kerry, then bought Springfield castle. His son, John FitzMaurice, was a nephew Thomas Fitzmaurice, 1st Earl of Kerry and ancestor of the Marquis of Lansdowne. He built a large, three-storey early Georgian mansion attached to the existing buildings, and a visible mark to the tower house represents part of the roof line of that 18th century mansion built by John FitzMaurice.

The FitzMaurices continued to live at Springfield Castle until Ann FitzMaurice, the sole heiress, married Sir Robert Tilson Deane in 1775. 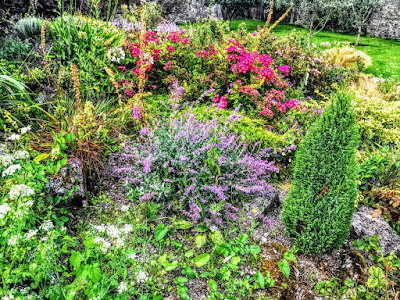 The Deane family was descended from Sir Matthew Deane, who moved from Somerset to Ireland in the mid-17th century, bought lands in Co Cork, and was made a baronet in 1709. His descendant, Sir Robert Tilson Deane, was MP for Carysfort (1771-1776) and Co Cork (1776-1781). He married Anne FitzMaurice of Springfield Castle, and received the title of Baron Muskerry in 1781.

This 1st Lord Muskerry built ‘a splendid mansion’ on which he is said to have spent at least £30,000. But before it was inhabited, this mansion had ben dismantled by 1788 and ‘the materials sold.’

Robert Tilson FitzMaurice Deane (1826-1857), grandson of Robert and Anne, married Elizabeth Geraldine Grogan Morgan of Johnstown Castle, Co Wexford, in 1847 and assumed the additional name of Morgan. She was an aunt of Lady Maurice FitzGerald who, as Adelaide Forbes, married Lord Maurice FitzGerald, second son of the fourth Duke of Leinster. 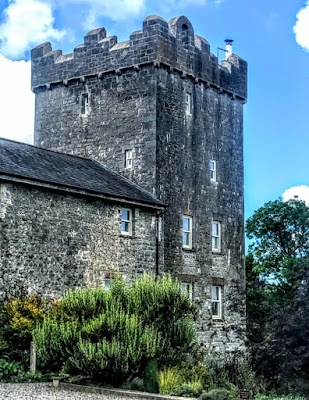 Robert and Elizabeth were the parents of Hamilton Matthew Tilson Fitzmaurice Deane-Morgan (1854-1929), who succeeded his grandfather as 4th Baron Muskerry in 1868. In the 1870s, Lord Muskerry owned 3,161 acres in Co Limerick, 742 acres in Co Tipperary, 912 acres in Co Wexford and 28 acres in Co Clare.

His wife, Elizabeth Grogan Deane Morgan, owned over 350 acres in Co Waterford in the 1870s as well as extensive estates in Co Kilkenny and Co Wexford.

Springfield Castle was burnt in 1921 during the War of Independence. At the time, the IRA claimed the Black and Tans were going to convert the buildings into a garrison. 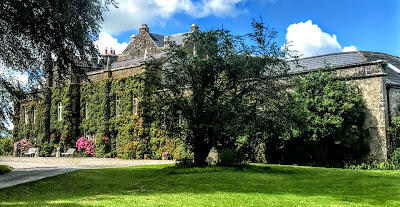 Springfield Castle was rebuilt by the 5th Lord Muskerry in 1929 (Photograph: Patrick Comerford, 2019)

The castle was rebuilt in 1929 by Bob Muskerry, Robert Matthew Fitzmaurice Deane-Morgan (1874-1952), when he succeeded as the 5th Lord Muskerry. He built the current house in the Gothic Revival style of the 19th century, with pinnacles and turrets at the house and the main entrance. The castellated entrance towers with tooled stone forming the main fabric of the turrets and a grand entrance door greatly enliven the façade.

Robert Fitzmaurice Deane, the present and ninth Baron, lives and works in South Africa, and is funding a restoration project that started in 2006 with the renovation of the East Tower. The Tower house is being restored as venue for events and functions. Lord Muskerry’s sister Betty and her husband Jonathan Sykes run Springfield Castle today with their family. 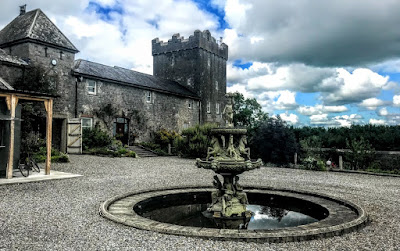 The courtyard complex has an array of interesting buildings (Photograph: Patrick Comerford, 2019)

The enclosed farmyard complex behind the house follows the plan of a bawn wall, incorporating earlier 16th and 18th-century tower houses. The wall-mounted clock on the side of the central gate tower was designed as a mechanical calendar, with a lunar calendar controlling the bell to the roof. 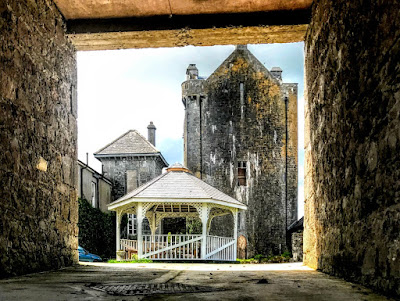 A glimpse of the past at Springfield Castle (Photograph: Patrick Comerford, 2019)

There is a two-bay, four-stage, 18th-century tower house at the north end of the east range, with a parapet wall and a bellcote.

The ruinous remains of an 11-bay single-storey outbuilding form the north range of the courtyard with a ruinous central tower.

A two-bay, single-stage 18th-century corner tower stands at the west end of the north range.

The three-stage rectangular 16th-century tower house has the ruins of a circular turret associated with original bawn wall.

The central lawn area in the enclosed yard has a tooled limestone column mounted on pedestal surmounted by later render figurine of a monkey and a timber gazebo. 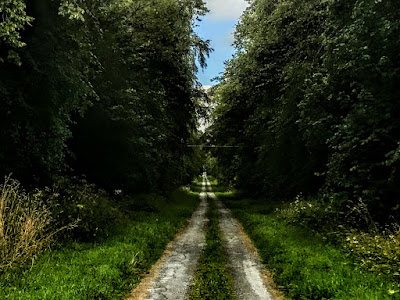 The drive leading up to Springfield Castle (Photograph: Patrick Comerford, 2019)

Springfield Castle and the drive leading up to it are entered through a free-standing Egyptian style gateway built ca 1900. However, another local tradition says the gateway was inspired by a Maori tradition that Lord Muskerry came across while working in Australia and New Zealand.

The Deane family motto engraved above the gate, Forti et Fideli Nihil Difficile, means ‘Nothing is Difficult to the Brave and Faithful.’

A plaque at the gateway commemorates Daithi O Bruadair, a 17th-century Irish poet of the Bardic tradition who lived at the castle with his patrons, the Fitzgerald family. 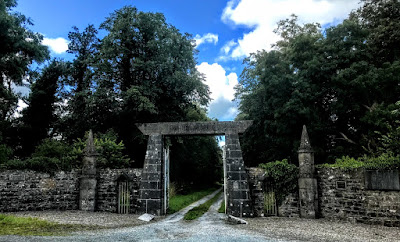 The gateway at Springfield Castle … is its inspiration Egyptian or Maori (Photograph: Patrick Comerford, 2019)

Ireland, as viewed by you, seems to be rich in old castles. America, in contrast, seems to have many fewer per square mile, possibly because (since Revolutionary times) ample artillery was available to pulverize the stonework.

I would imagine that America a comparatively young country, had no need of massive stone-built castles, and that by the time of the American Revolution they had become obsolete anyway due to advances in technology. Ireland too by then had dispensed with them, their ruins testifying to their vulnerability to artillery during the wars of the 1640s and beyond (there was plentiful artillery around in Ireland at this time!). By the beginning of the C18 unfortified mansions had largely replaced the 3,000 or more castles that had been built, and was the beginning of a relatively peaceful time in Ireland's turbulent history.

Hi Patrick, I'm trying to establish exactly where the is ruined church you refer to that is close to the castle. Google doesn't help so thought I would ask you! On Google Maps satellite view, am I right in thinking the ruined church and surrounding graveyard is the roughly square plot of land south-south-west of the Castle itself, linked to it by a long, straight hedgerow?

Poking my nose in here; if it helps, the graveyard and church in question is signposted as "Springfield Cemetery" from the main road ("Gort na Tiobraid Reilig"), and the Historic Environment Viewer lists it on the 25 in map as both a graveyard and ruined church described as "In demesne of Springfield Castle", and it's suggested that the church may have been a chapel-of-ease built by the Fitzgeralds. The church and graveyard is indeed where you have described SSW of the Castle.

Thanks a lot Mike, very helpful. You may also know the answer to my next question then- do you know if the Barons Muskerry are buried in the Cemetery, or was it only for the Fitzgeralds? If the latter, do you know where the Muskerries were buried?

Glad to be of help, but sorry, but that's the extent of my knowledge. Perhaps the present incumbents of the castle Jonathan & Betty Sykes can help with information. I visited the castle in 2012 after a request to photograph it was granted, and was very graciously welcomed by Jonathan who I'm sure will help if he can. Best wishes. Mike.

Thanks Mike- perhaps Patrick might know as well when he checks in.