Dublin Airport Church:
the airport’s ‘most beautiful’
and ‘best-kept secret’ 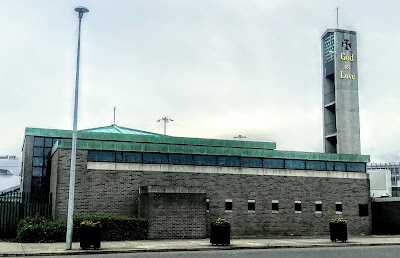 The Church of Our Lady Queen of Heaven has been described as ‘the most beautiful part of Dublin Airport’ and ‘its best-kept secret’ (Photograph: Patrick Comerford, 2019)

The Church of Our Lady Queen of Heaven has been described as ‘the most beautiful part of Dublin Airport’ and ‘its best-kept secret.’

The church is hidden from most people travelling through the airport. Today it is tucked in between the Terminal 1 car park and a traffic hub for airport buses. But it was designed 55 years ago to sit in an open-air precinct in the church, far away from the bustle of taxi ranks, duty-free shopping and continuous announcements.

I have passed it by on countless occasions since it was first built in the 1960s, but only visited it for the first time 10 days ago, when I passed through the airport on way back from Cornwall.

The church is just a minute away from Terminal 1 and the Short-Term Car Park, but now almost inaccessible to passengers using Terminal 2, which is served by a multi-faith room. 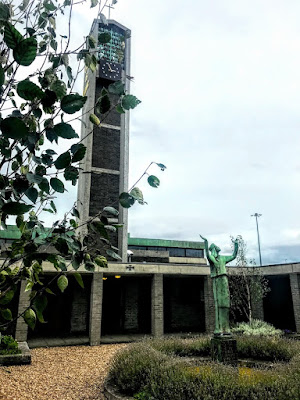 The church, with its concrete bell tower and landscaped courtyard, was built in 1964 (Photograph: Patrick Comerford, 2019)

When this church, with its concrete bell tower and landscaped courtyard, was built in 1964, it was one of the first modernist churches in Dublin.

One writer points out that ‘some of Ireland’s most interesting and bold modern movement architecture can be seen in churches, not least because the clients were very committed, the desired result was something monumental and the brief to the architect was specific but also pretty simple compared to other building types: one large, beautiful space and a number of other rooms.’ 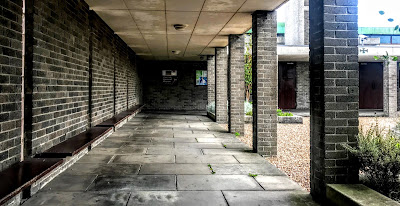 The church was designed by the Limerick-born architect Andrew Devane (Photograph: Patrick Comerford, 2019)

The Church of Our Lady Queen of Heaven was designed by Andrew Devane of Robinson, Keeffe & Devane (now RKD) of Dublin.

This architectural partnership was formed in 1946 when Andrew Devane joined John Joseph Robinson and Cyril Keefe of Robinson & Keefe. Robinson and Keefe both died in 1965. The practice has continued under the same name until it was renamed RKD.

Andrew Devane (1917-2000) was born in Limerick, a doctor’s son, on 3 November 1917. He studied architecture at University College Dublin under Rudolf Maximilian Butler and graduated in 1941. He was awarded the Taliesin Fellowship in 1946 and this allowed him to study in the US under Frank Lloyd Wright until 1948.

Devane had written to Wright ‘I cannot make up my mind whether you are in truth a great architect – or just another phony,’ to which Wright replied, ‘Come along and see.’

When he returned to Ireland in 1948, he re-joined Robinson and Keefe as a partner. After he retired, he devoted much of his time devoted to working with Mother Teresa in India, and he died in Calcutta on 15 January 2000. 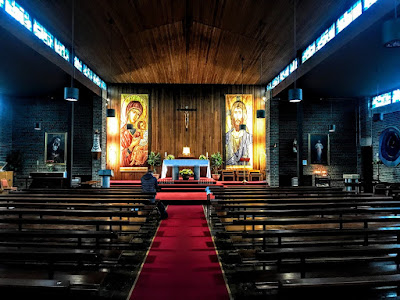 The building contractor for Devane’s airport church was Seamus Murphy Ltd of Templeogue. The church opened on 26 July 1964 with a Mass celebrated by Archbishop John Charles McQuaid of Dublin. 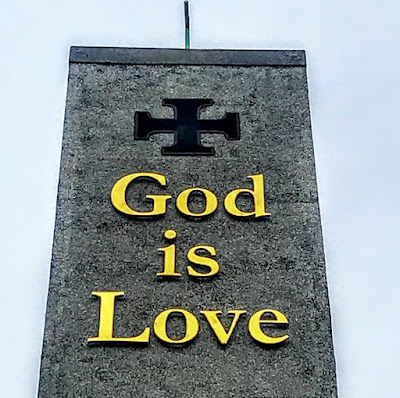 ‘A remarkable building’ that ‘has been able to survive many attempts to remove it’ (Photograph: Patrick Comerford, 2019)

At the fiftieth anniversary celebrations in the church in 2014, Archbishop Diarmuid Martin described it as ‘a remarkable building which I am happy … has been able to survive many attempts to remove it.’

The church is built in brick and concrete, with flat roofs and with a concrete bell tower rising above.

The atrium buffers the church from the airport sound and provides a quiet, contemplative space where people can meet. The peristyle or columned porch around the atrium shelters a generous walkway with benches projecting from the walls.

Imogen Stuart’s sculpture, Madonna Fountain (1969), is in the centre of the atrium landscaping. 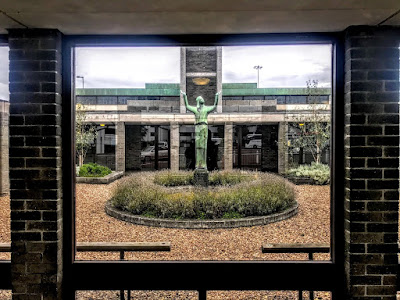 Inside, the church is brick-lined, with a timber backdrop to the altar, and quite dimly lit, but the bands of stained-glass Stations of the Cross set into the walls fill the interior with lines of bright colour. The nave is raised above the side aisles and allows for strips of stained glass between the two levels, subtly defining the traditional zones of the church.

The clerestory windows have timber frames and there are tongue and groove timber doors. 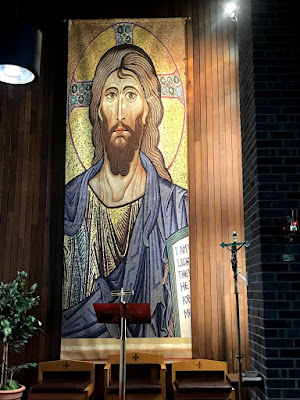 A banner in the sanctuary in the Church of Our Lady Queen of Heaven at Dublin Airport (Photograph: Patrick Comerford, 2019)

The initiative for building the church came from a group of aviation staff and with the support and cooperation of the then Chief Executive of Aer Lingus and Aer Rianta, JF Dempsey, who allocated the site at what was then the centre of the airport. The new Airport Chaplain became the airport’s sole resident.

Many airport staff members have celebrated their weddings, baptised their children and held their funeral services in this church. The funding and early maintenance of the church was provided by airline and airport staff, enabled through payroll deductions authorised by airport and airline management.

Many Dublin diocesan priestunders have served in the Dublin Airport chaplaincy over the years. They include John Fenlon, Ben Mulligan, Martin Tierney, Tommy McCarthy, Declan Doyle, Jim Kenny and Dermot Doyle. Father Tommy McCarthy is remembered as the pilot priest who also acted as a commercial pilot training instructor during his leisure time.

The annual 9/11 memorial Mass is supported by the Airport Police Fire Service Brass and Reed Band.

One of the high-profile funerals in the church was of murdered journalist Veronica Guerin. A quotation from the homily of the then chaplain, Father Declan Doyle, is engraved on her tombstone: ‘Veronica’s death was one of these events when a nation stops, when time stands still, when we look at ourselves as a society and ask: where are we going? This line of questioning is a special moment of history.’ 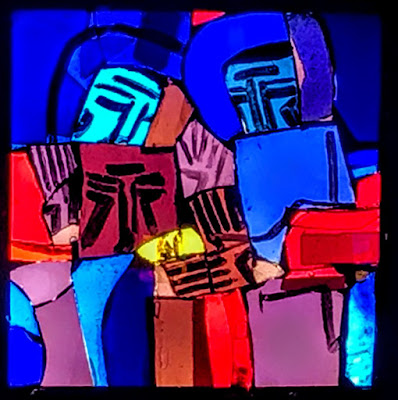 A stained-glass window and one of the Stations of the Cross in the church (Photograph: Patrick Comerford, 2019)

At the fiftieth anniversary celebrations in 2014, Archbishop Diarmuid Martin said ‘the idea of the architect has been realised: realised in the sense that the complex has become a place where men and women working in the airport or travelling though are able to come aside from the hustle and bustle of work and life and anxiety, and walk through the calm of the courtyard into the quiet and peaceful and prayerful atmosphere of the Church.’

The church remains one of the more unique and beautiful aspects of this airport complex. It is an oasis of silence and contemplation in a world that it so busy with functionality that it finds it hard time to think about the deeper things, the things that give meaning and hope and dignity to people and their lives.

Sunday Mass in the Church of Our Lady Queen of Heaven is normally at 11 a.m.

A banner in the church … it remains an oasis of silence and contemplation (Photograph: Patrick Comerford, 2019)