A return visit to the former
Saint Mary’s Church, Dublin,
in search of a monument 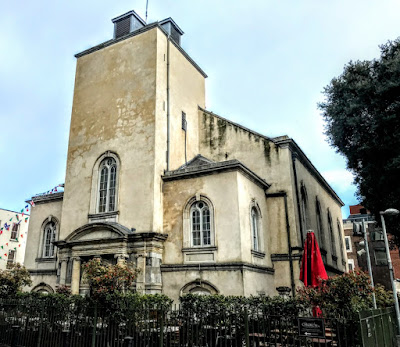 During a brief visit to Dublin earlier this week, I paid a short, return visit to Saint Mary’s Church, Dublin, a former Church of Ireland on the corners of Mary Street, Jervis Street and Wolfe Tone Street in Dublin’s north inner city, beside Wolfe Tone Square.

I was in search of a monument to a former rector, Canon Robert Law (1730-1789), who the Rector of Saint Mary’s in 1772-1789, when it was a fashionable church in Dublin and while he was holding lucrative church appointments at the same time in the dioceses of Clogher and Cloyne.

I was interested in Law because his son, the Revd Francis Law (1768-1807), married Belinda Isabella Comerford, daughter of Patrick Comerford of Summerville, Cork, on 5 November 1795, and they were the parents of the Revd Patrick Comerford Law.

The Revd Patrick Comerford Law was the Rector of North Repps, Norfolk, in 1828 when he married Frances Arbuthnot, daughter of the Right Revd Alexander Arbuthnot, Bishop of Killaloe. 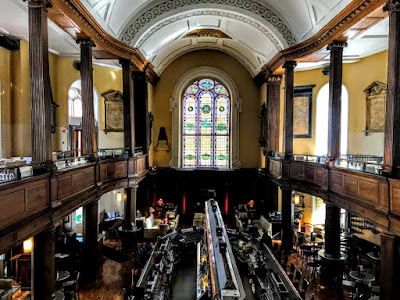 Inside Saint Mary’s Church, the earliest example of a galleried church in Dublin (Photograph: Patrick Comerford, 2019)

The former Saint Mary’s Church is the earliest example of a galleried church in Dublin. It was built at the beginning of the 18th century and it still boasts many outstanding features, including the organ built by Renatus Harris (ca1652-1724). and a spectacular stained glass window.

From the early Middle Ages, the north side of Dublin was served by the parish of Saint Michan’s and Saint Mary’s Abbey, which gives its name to Abbey Street and Mary Street.

With the dissolution of the monasteries at the Reformation, Saint Mary’s Abbey was closed, and the Parish of Saint Mary’s was formed in the late 17th century. Saint Mary’s parish was separated from Saint Michan’s Parish and made a district Parish by Act of Parliament on 20 November 1697. 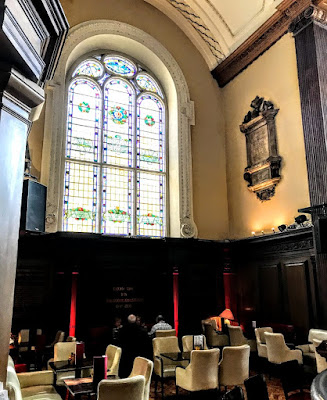 Saint Mary’s Church was designed in 1697 by the architect Sir William Robinson (1645-1712) and the foundation stone was laid in 1700. Some of the building work was overseen by Thomas Burgh, and the church was consecrated in 1701.

Robinson was the Surveyor General in Ireland from 1670 when he was appointed by the Viceroy, Lord Berkeley. It has been suggested that he came from England in succession to Captain John Morton who died in 1669, the architect to the previous Viceroy, the Duke of Ormonde.

As well as Saint Mary’s Church, the architectural works attributed to Robinson include the Royal Hospital, Kilmainham, Marsh’s Library, the west front of Trinity College Dublin later demolished in the 1750s, the rebuilding of Saint Michan’s Church (1685-1686), and some work at Dublin Castle and Kilkenny Castle. 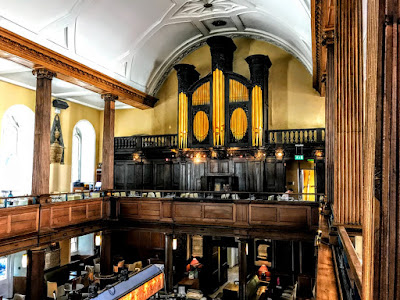 The first Rector of Saint Mary’s, Peter Broun (or Browne), was appointed in 1698, but he resigned a year later and was Provost of Trinity College Dublin (1699-1710) and Bishop of Cork and Ross (1710-1735). The first churchwardens were Robert Rochfort, the Attorney General, and Allen Brodrick, the Solicitor General.

John Wesley, the founding figure in Methodism, preached his first sermon in Ireland in Saint Mary’s in 1747. 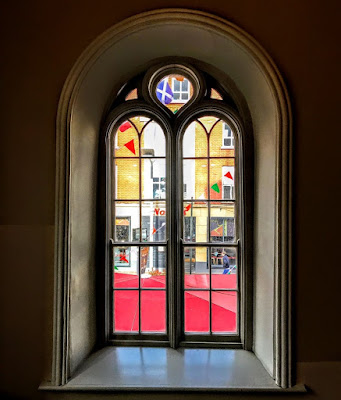 A window looking out onto Mary Street (Photograph: Patrick Comerford, 2019)

Other notable baptisms in the church include Seán O’Casey, playwright and author of The Plough and The Stars, Juno and The Paycock, and The Shadow of a Gunman, was baptised here in 1880. 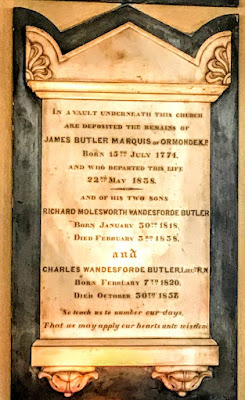 The monument to the Revd Canon Dr Robert Law, former rector of the parish, boasts that his ‘afflicting loss will, alas, be long severely felt by the Poor, Deeply regretted by the Rich, And sincerely lamented by all.’ 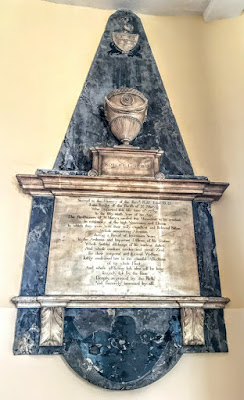 After Saint Mary’s closed on 17 May 1981, it was used by the Greek Orthodox Church until 1986. The church was later deconsecrated and all the coffins in the vaults and crypts were removed, and the bodies were cremated and reinterred at Saint Michan’s Church. This process was supervised by a Dublin Corporation and the Representative Body of the Church of Ireland.

The churchyard was converted into Wolfe Tone Square, a public park, and some of the gravestones were stacked at the south end. 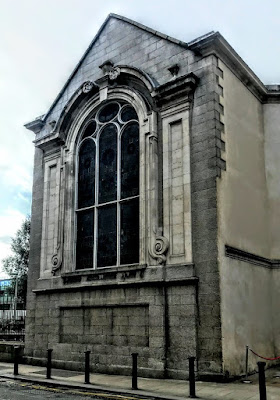 For some years, Saint Mary’s was a home decoration store with shop fittings competing for attention with the galleries, stained glass windows, the organ and the Georgian and Victorian monuments.

The building lay derelict for some years until it was bought by John Keating in 1997. Following extensive restoration over a seven-year period, this listed building finally reopened in December 2005 as John M Keating’s Bar.

The building was acquired by new owners in 2007 and renamed the Church Bar and Restaurant, and it was expanded to include a café, night club and a barbeque area on the terrace.

Outwardly, the most dominant features the exterior of Saint Mary’s are the round-headed windows similar to those Robinson also used at the Royal Hospital, Kilmainham. Like many churches in Dublin, Saint Mary’s never received its intended spire and has a rather stumpy tower at the west end.

Inside, the church is galleried on three sides, with the organ placed opposite the main window. The ceiling is barrel vaulted with an elaborate pattern of plasterwork. The galleries are supported on octagonal columns that also support the roof.

A new entrance has inserted into the north wall, making the south side facing the park and former churchyard the most intact part of Robinson’s original design. 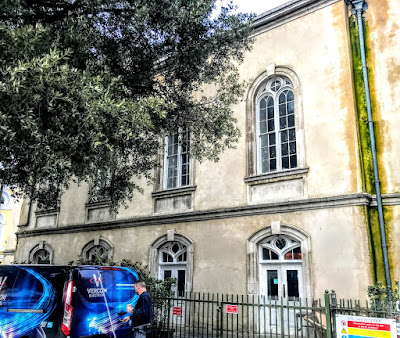 Robinson’s round-headed windows on the south side of the church (Photograph: Patrick Comerford, 2019)