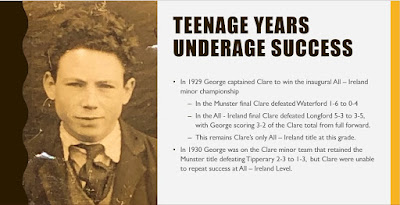 During my visits to Co Clare and Co Galway in recent weeks as part of this summer’s continuing ‘road trip,’ I have visited a number of houses associated with the Comerford family in places such as Spanish Point, Miltown Malbay, Ennistymon, Kilfenora and Kinvara.

Over the next few weeks, I hope to revise and update my family trees for different branches of the Comerford family in Co Clare and Co Galway. However, one well-known Comerford in Co Clare, with family connections in Limerick, seemed to continue to evade my efforts to find his place on the family tree.

George (‘Georgie’) William Comerford (1911-1988) was a member of An Garda Síochána and was a well-known Gaelic footballer who is remembered as Miltown Malbay’s greatest-ever footballer. He played football for four counties – Clare, Louth, Dublin and Kildare; and he played inter-provincial football for two provinces – Munster and Leinster.

Instead, this Georgie Comerford’s father was Daniel Comerford (1866-1913), a sergeant in the Royal Irish Constabulary, and his grandfather was John Comerford, a farmer in Loughtagne, near Stradbally, Queen’s County (Co Laois).

Daniel Comerford was born on 2 January 1866 near Stradbally. He joined the Royal Irish Constabulary on 22 November 1888 and was posted to Co Limerick on 29 June 1889. On 12 July 1898, Daniel married Mary Anne Murphy, daughter of Thomas Murphy, carpenter, in Saint Michael’s Church, Limerick.

When he married, Daniel was transferred from Co Limerick to Co Clare, and he was an RIC constable, living at Ennis Road, Miltown Malbay, Co Clare, in 1901 and 1906.

Daniel died on 24 October 1913, at Whitegate, Co Clare, and was buried in Clonrush. His family then returned to Miltown Malbay, where Mary Anne died on 20 December 1946.

Mary Anne and Daniel Comerford were the parents of seven children:

The eldest surviving son, Daniel Christopher Comerford (1902-1980), was born Miltown Malbay on 10 December 1902. On 4 August 1922, he joined the new National Army as an infantry private, during the Irish Civil War.

Daniel emigrated to New York in 1925 and lived there for at least five years before returning to Miltown Malbay. In the 1930 census, Daniel and his brother Joseph are recorded as living in Astoria, Queens, with their cousins the Furlongs.

Daniel returned to Co Clare and he married in Miltown Malbay on 7 June 1939 Emelia (Amy) Wilson (1907-2003), a daughter of Leonard Wilson (1867-1932) from Portadown, Co Armagh. Leonard joined the RIC in 1888 and was posted to Clare that year. He married Bridget McMahon (1865-1934) in Miltown Malbay and was posted to Co Limerick in 1898. While he was stationed in Limerick, Bridget ran the family business, Wilson’s Pub, on Main Street, Miltown Malbay. Leonard was promoted Acting Sergeant on 1 October 1902 and Sergeant on 1 December 1905. He retired in April 1913, and when he died on 10 April 1932, he was buried in the Church of Ireland churchyard in Miltown Malbay.

Sergeant Daniel Comerford’s youngest child, Georgie Comerford, was born in Whitegate, Co Clare, on 25 January 1911, and he was only two when his father died. He attended primary school in Miltown Malbay and secondary school in Ennistymon. Miltown won the first minor championship in Co Clare in 1924, and won it again in 1926 and 1927. Georgie Comerford was on all those teams and played with the Clare minors in 1929 when they won the All-Ireland.

He joined the Garda Síochána in the late 1920s. He was the only non-Kerry player on the victorious Munster Railway Cup team in 1931, when all other 14 team members were from Co Kerry. He was a member of the Ireland selection for the Tailteann Games in 1932, representing his native Co Clare.

He played in the All-Ireland final for Dublin at Croke Park in 1934, when Galway scored 3-05 to Dublin’s 1-09. He also won a Railway Cup medal with Leinster in 1935, this time representing Dublin.

As a garda, he was stationed in Athy, Co Kildare, for a number of years in the mid-1930s. He captained the senior championship winning team in 1937, and played for Co Kildare in the Leinster Final in 1938, when, for the second time in three years, Kildare were defeated by Laois.

When he was in his mid-40s, George Comerford played football for Co Louth and won a championship with Dundalk Gaels in 1945. In retirement, he returned to live in Co Clare. He died on 20 July 1988 in Miltown Malbay and was buried in Ballard Cemetery.