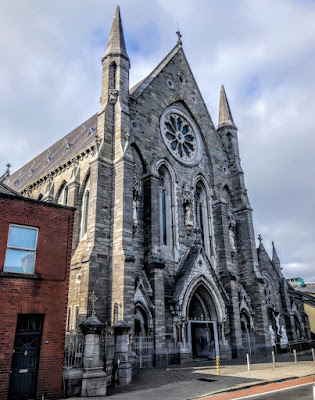 The Capuchin Church of Saint Mary of the Angels on Church Street, Dublin, was designed by JJ McCarthy and built in 1866-1882 (Photograph: Patrick Comerford, 2021)

My theme for these few weeks is churches in the Franciscan (and Capuchin) tradition. My photographs this morning (21 October 2021) are from the Capuchin Church of Saint Mary of the Angels on Church Street, Dublin. 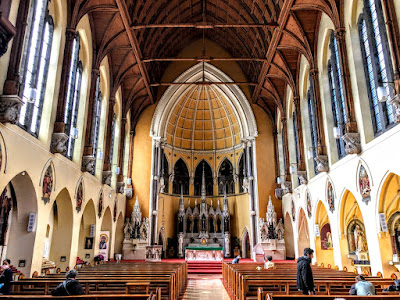 Inside the Church of Saint Mary of the Angels on Church Street, facing the liturgical east (Photograph: Patrick Comerford, 2021)

The Capuchins began as a reform movement within the Franciscan tradition in 1525. The Capuchin Friars first arrived in Ireland in 1615, and established their first Friary in Dublin in Bridge Street in 1626. They moved to Church Street in the 18th century, and in 1796 they built a simple chapel facing the street.

The Capuchin Church of Saint Mary of the Angels on Church Street, Dublin, faces the Father Mathew Square public housing scheme. The church is named after a small church of the same name in Portziuncula, 2 km south of Assisi, where Saint Francis of Assisi died on the evening of 3 October 1226.

Building work began in 1866, the foundation stone was on laid 12 June 1868, but the church was not completed until 1881. The church was dedicated on the Feast of Saint Francis on 4 October 1882.

The church was designed in the Decorated Gothic style by James Joseph McCarthy (1817-1882), who saw himself as the architectural heir of AWN Pugin in Ireland.

The Gothic style of the exterior is very impressive, with its large lancet and rose windows and canopied statues. The street-facing façade is built of limestone, with Portland stone dressings, and the three gabled entrances have tall Portland hoods.

The large, pointed, relieving arch frames a rose window. Below it are two tall two-light windows in deeply-moulded frames, and a canopied statue of the Virgin Mary by Leo Broe, between canopied statues, also by Leo Broe, of the Franciscan saints, Saint Francis and Saint Clare, in the tall lower arches in the outer bays.

Inside, the church is oriented on a west-axis rather than the liturgically traditional east-west axis. This is a 10-bay hall with low, shallow lateral chapels and confessional niches, and a large, pointed-arch apse.

The interior is lit from the tall, graded triple-lancets with dark limestone mullions in the north and south walls.

There is a trefoil-profiled kingpost roof, with giant carved corbels of angels and saints.

The high altar and reredos are by James Pearse (1839-1900), father of the 1916 leader Patrick Pearse. The reredos depicts six Franciscan saints: Saint Clare, with a monstrance, Saint Louis of France, Saint Lawrence of Brindisi, Saint Fidelis of Sigmaringen, Saint Elizabeth of Hungary and Saint Felix of Cantalice.

The mandorla-shaped Stations of the Cross are in oil on canvas, with inscriptions in Irish. The side altars are dedicated to the three patron saints of Ireland, Saint Patrick, Saint Brigid and Saint Colmcille.

The chapel of the Third Order of Saint Francis was added in 1891, the gallery and choir loft in 1906, the shrine of Saint Anthony of Padua in 1945, and the Lourdes Grotto in 1950. A north aisle, added in 1910 by Ashlin and Coleman, now serves as an enclosed hall and sacristy.

The Father Mathew Hall, beside the church, and the adjoining monastery were built in 1881.

Today the friars serve their local community through parish work and through the Capuchin Day Centre, founded in 1969 by Brother Kevin Crowley. From humble beginnings in the Friary gardens, it now provides over 700 meals each day and over 1,500 food parcels each Wednesday to the homeless and poor of Dublin. Pope Francis visited the Capuchin Day Centre during his visit to Dublin in August 2018.

Saint Mary of the Angels is not a parish church, but the friars are responsible for Halston Street Parish, one of the oldest in Dublin city centre.

The Father Mathew Square housing scheme, facing the church, was designed in 1917 by JJ McCarthy’s son, Charles James McCarthy (1857-1947). It was named after the Capuchin temperance campaigner, Father Theobald Mathew, who gives his name to the Capuchin church in Cork. 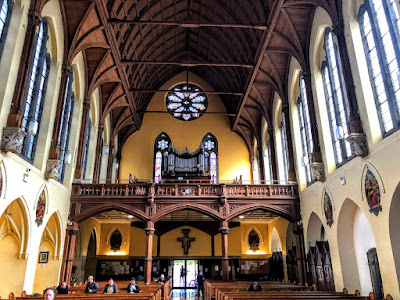 Inside the Church of Saint Mary of the Angels on Church Street, facing the liturgical west (Photograph: Patrick Comerford, 2021) 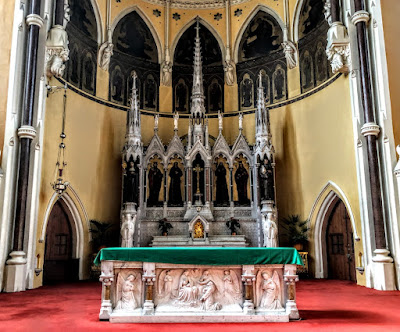 The Prayer in the USPG Prayer Diary today (21 October 2021, Global Media and Information Literacy Week) invites us to pray:

Lord, we thank you for the ability to communicate with Christians across the world through technology. May we use this technology wisely and safely, casting a critical eye over the information we receive. 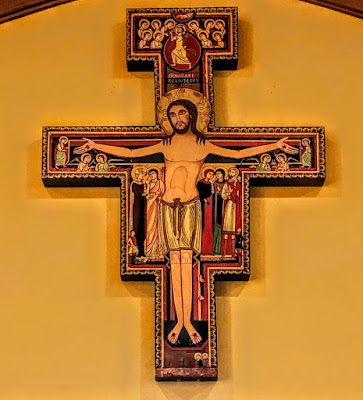 The Franciscan cross beneath the organ and gallery (Photograph: Patrick Comerford, 2021) 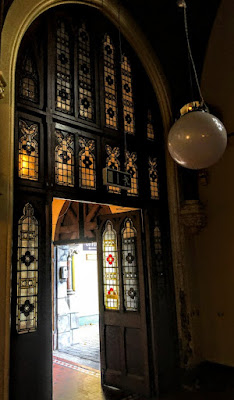