I am on my way to Kilkenny this morning, travelling by bus and train, from Askeaton through Limerick, Limerick Junction, Clonmel and Waterford, for this evening’s institution in Saint Canice’s Cathedral of a former student, the Revd David MacDonnell, as the Incumbent of the Kilkenny Union of Parishes and his installation as the Dean of Ossory.

Earlier this week, I was discussing how I had recently rediscovered my lecture notes for 12 modules of 12 of lectures each on Islamic Studies and Byzantine Studies in 2003-2004 on the NUI Maynooth Campus at Saint Kieran’s College, Kilkenny.

Saint Kieran’s College on College Road, Kilkenny, is set back from the road in landscaped grounds, and is a picturesque, impressive set of Tudor-Gothic revival buildings dating from the early Victorian period.

Saint Kieran’s College, which predates Maynooth by 13 years, was founded in 1782 as a diocesan college under the patronage of the Bishop of Ossory. Grattan’s Parliament had relaxed the Penal Laws that year, and records show a lease was signed for an old house in Kilkenny on 12 October 1782. This makes Saint Kieran’s the oldest Catholic college in Ireland and ‘the first Catholic College in the Kingdom.’

During its history, the college has been at a number of different locations, but always at the heart of the city, and moving to its present location in 1836.

The core college buildings were built under the direction of William Kinsella (1793-1845), Bishop of Ossory, to plans designed by the Dublin-born architect William Deane Butler (1793/1794-1857).

William Deane Butler was the second of the 13 children of George Butler, a Dublin solicitor, and his wife, Elizabeth Shea. He trained as an architect under Samuel Beazley and Henry Aaron Baker.

His other works include Saint Mary’s Roman Catholic Cathedral, Kilkenny, the Church of Saint Peter and Saint Paul, Monasterevin, the county gaols in Ennis and Portlaoise, courthouses in Ballyconnell, Bray, Callan, Clifden, Cootehill, Newtownbutler and Urlingford, the Railway Station at Amiens Street, Dublin, and a gate lodge at Dublin Zoo.

Butler was appointed architect in ordinary to the Lord Lieutenant in 1853. He was married three times, had 13 surviving children, and died on 28 November 1857.

The college is simple but elegant, centred on the elevated chapel, and is an important landmark on College Road. The college buildings are well maintained, with most of the historic fabric still intact both outside and inside, and it is enhanced by the variety of openings in each range, as well as the distinctive glazing patterns and the finely-carved details.

At the rear or north side, there are nine-bay, three-storey over raised basement elevations. 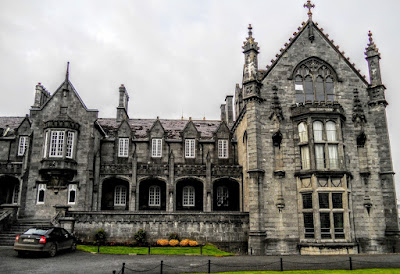 This building was renovated and extended in 1875, with the addition of a single-bay, two-storey, gabled projecting terminating block with an attic to the right (east). This has a two-storey canted bay window, and five-bay two-storey side elevations. In addition, a series of elliptical-headed openings were added to the east and west wings, forming arcaded bays.

The 17-bay mainly three-storey school buildings to the north, enclosing a courtyard, date from 1933. The college was completed in 1955 with the addition on left or west side of a single-bay, two-storey over part-raised basement gabled projecting terminating block that has a six-bay, four-storey side or west elevation. This addition has a half-dormer attic and a three-stage canted bay window.

The interesting details in this composition include the projecting bays, the open arcades, the gablets at the windows, the half-dormer attic windows, the cut-limestone chimney stacks, the gables with cross finials at the apexes, the octagonal corner turrets on the chapel, the gabled buttresses, the ogee domes, recesses and finials, the battlemented parapet, the pointed-arch windows openings, the cut-limestone steps, the carved cut-limestone doorcase and the tongue-and-groove timber panelled double doors. 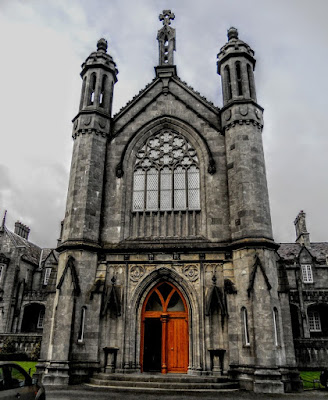 The college chapel forms the centrepiece of the main building (Photograph: Patrick Comerford)

The college chapel, which forms the centrepiece of the main building, has a range of interesting artistic items, with an altar carved by Harry Stafflesser of South Tyrol, delicate stained-glass panels from the Harry Clarke studios, timber pews, panelled wainscoting incorporating a Gothic-style reredos, a timber panelled gallery, a decorative plasterwork cornice to the ceiling, a pointed-arch chancel arch, and trefoil-headed timber panelled wainscoting.

The complementary and elegant arched gateway on College Road was erected in 1941 but dates from 1782. This is a Tudor-headed carriageway with tooled limestone ashlar piers, chamfered reveals, a hood moulding over, iron double gates, cut-stone date stones or plaques.

Originally, this was the gateway to Jenkinstown Castle and estate in Co Kilkenny. It was reassembled on site at the entrance to Saint Kieran’s in 1941 and it remains a picturesque feature on College Road.

Sadly, the Kilkenny Campus of Maynooth University closed this year in June 2018. 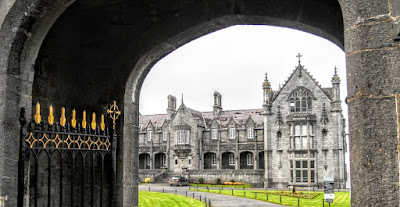