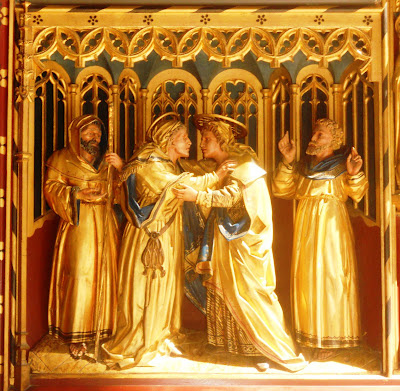 The Visitation … a panel from the 19th century Oberammergau altarpiece in the Lady Chapel in Lichfield Cathedral (Photograph: Patrick Comerford)

This is a busy day, including an end-of-term school service in Rathkeale later this afternoon. Before this busy day begins, I am taking some time early this morning for prayer, reflection and reading. 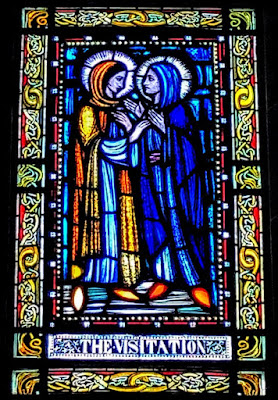 The seven majestic Messianic titles for Christ are based on the Biblical prophecies, and they help the Church to recall the variety of the ills of humanity before the coming of the Redeemer as each antiphon in turn pleads with mounting impatience for Christ to save his people.

The antiphon draws from a number of Biblical sources, including Isaiah, Wisdom, Ecclesiastes and Sirach.

In England, according to Sarum Use, the Great ‘O Antiphons’ began on 16 December with an eighth antiphon, O Virgo virginum (‘O Virgin of Virgins’), sung on 23 December, and O Sapientia was retained as a curious entry, without explanation, in the December liturgical calendar of The Book of Common Prayer.

In 1561, a number of saints dropped from the Roman calendar were restored in the calendar of the Elizabethan Book of Common Prayer by way of the Latin Book of Common Prayer which was in use in Cambridge and Oxford college chapels – places where Latin was expected to be ‘a tongue understanded of the people.’ Indeed, the Ordinal expected bishops before the ordination of bishops, priests or deacons, to examine the candidates and to proceed only after finding them ‘learned in the Latine Tongue.’

The canticle Magnificat replaces a psalm in the Lectionary provisions for next Sunday (Advent IV, 19 December 2021), and is the second part of the longer version of the Gospel reading [Luke 1: 39-45 (46-55)]. This is the great prayer of the Virgin Mary in Luke 1: 46-55, when she visits her cousin, Saint Elizabeth. In this way, we are reminded that the Saviour we are expecting is to come to us through the Virgin Mary. The ‘O Antiphons’ are sung twice, once before and once after the canticle to show their great solemnity.

As we think of the O Sapientia antiphon and the Virgin Mary and Saint Elizabeth through the canticle Magnificat and in Sunday’s Gospel reading, it is worth concluding this Advent meditation by recalling Saint Elizabeth, the mother of Saint John the Baptist and the wife of Zachariah.

As Saint Elizabeth’s feast day on 5 November does not appear in either the Book of Common Prayer or Common Worship, it is appropriate today to remind ourselves of the story and words of Saint Elizabeth as she anticipates the birth of the Christ Child:

The Prayer in the USPG Prayer Diary today (17 December 2021) invites us to pray:

Let us pray for greater hospitality across borders as the number of refugees from climate change-related disasters increases year on year. 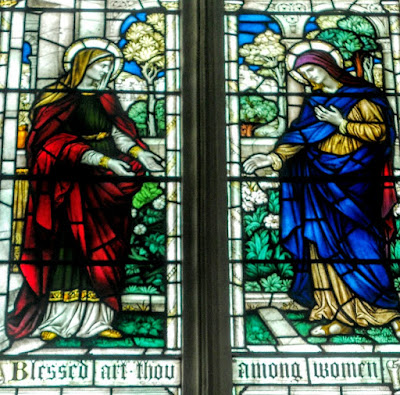