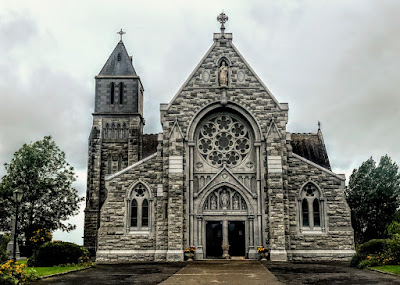 When the Church of Ireland realised the Cathedral of Saint Alibeus in Emly, Co Tipperary, was surplus to its needs and a drain on finances burden, the local Roman Catholic Parish priest, Canon Maurice Power, offered to buy the empty cathedral for £2,000.

However, his offer was rejected by Bishop Maurice Fitzgerald Day … on supposedly legal grounds, although they were never fully explained. These were the days immediately after disestablishment, and the grounds for Bishop Day’s refusal were flimsy, if not a reflection long-time tensions between the two traditions.

The Roman Catholic Church already had a small, pre-famine chapel in Emly, built in 1809, 20 years before Catholic Emancipation, and the cathedral would have provided an appropriate replacement. But the cathedral was demolished in 1877, and in 1880-1883 Canon Power built a new Roman Catholic parish church, dedicated to Saint Ailbe, beside the grounds of the cathedral. 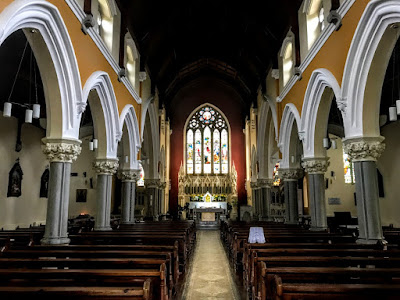 In the aftermath of the Reformation, the Roman Catholic Diocese of Emly had an unsettled history from the mid-16th to the early 18th century. In that period, there were only three Bishops of Emly and one vicar apostolic, and one of these had been executed.

Dermot O’Hurley, who was born at Emly ca 1530, spent much of his time working in Leuven and Rheims as a professor of philosophy and then a professor of law. He was still a layman when he was appointed Archbishop of Cashel by Pope Gregory XIII in 1581. He was ordained and consecrated in 1583 and returned to Ireland that year, landing at Holmpatrick Strand in Skerries, Co Dublin.

But he never reached his diocese. Instead, he was arrested in Carrick-on-Suir, Co Tipperary, imprisoned and tried for treason. He was tortured and then executed in June 1584, and was buried in Saint Kevin’s churchyard in Camden Row, Dublin.

Terence Albert O’Brien, a Dominican friar from Cappamore, Co Limerick, was appointed Coadjutor Bishop of Emly, with the right of succession, and he was consecrate an on 11 March 1647 by the Papal Nuncio, Cardinal Giovanni Battista Rinuccini. At the time, the Papacy did not know Bishop Maurice O’Hurley had already died in office in September 1646.

Terence O’Brien was consecrated bishop on 2 April 1648.He actively supported the military policy of the Confederation of Kilkenny, and was captured by the Cromwellian troops after the siege of Limerick. He was tried before a court martial and sentenced to execution by Cromwell’s son-in-law, General Henry Ireton. He was executed in Limerick on 26 November 1651.

Terence O’Brien was the last Bishop of Emly. Although James Stritch was nominated Bishop of Emly in 1695, he never took possession of the see.

From then on, there were long periods when Emly was vacant or administered by the Archbishops of Cashel. Edward Comerford was appointed Archbishop of Cashel on 14 November 1695 and administrator of Emly and Kilfenora. He lived in Thurles and died in office on 21 February 1710.

He was succeeded by Archbishop Christopher Butler, and in 1718 Pope Clement XI decreed the union of the sees of Cashel and Emly. 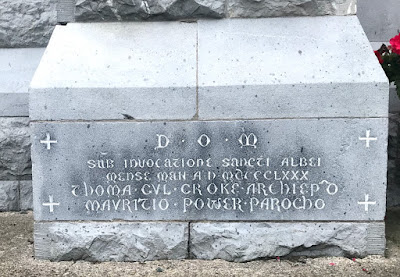 Saint Ailbe’s Church in Emly was designed by Pugin’s son-in-law, George Coppinger Ashlin (1837-1921), and was built of limestone from quarries at Hospital and Knockcarron, Co Limerick, in 1880-1882 by Healy Brothers of Tralee, Co Kerry, at a total cost of £14,500.

The church was built close to and parallel with the site of the demolished Church of Ireland Cathedral of Saint Alibeus. The foundation stone was laid by Thomas Croke, Archbishop of Cashel (1875-1902), on 30 May 1880, and the church was dedicated to Saint Ailbe on 6 January 1883.

Saint Ailbe’s is a robust Gothic Revival church and its architectural quality is seen in its scale, form, features and materials, with an interesting combination of rock-faced rubble limestone and ashlar dressings.

This is a cruciform church with clerestories, a nave, aisles and chancel, and a four-stage bell tower with a spire on the north side. The elaborate composition at the entrance front links the portal doorway and the rose window above. 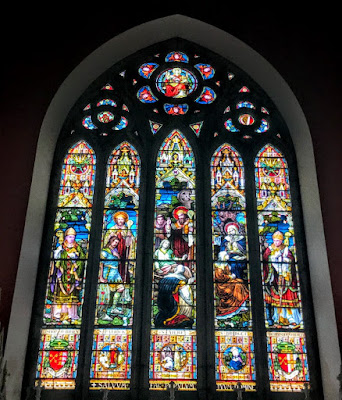 Outside, there are limestone cross finials, polychrome limestone walls, a carved limestone chimneystack, a cut limestone plinth course and stepped buttresses. The rose window at the front is set into a round-arch recess with an ornate keystone that supports the projecting base of a pointed-arch recess with statue of Saint Ailbe.

The sculpted tympanum has trefoil-arch recesses with statues over the pair of square-headed door openings, which have moulded architraves, carved recessed shoulders and timber battened doors flanked by colonnettes with dove and floral motifs on the capitals. Colonnettes support the decorative archivolt to the tympanum and all are flanked in turn by a second pair of colonnettes that continue upward to support the archivolt of the overall composition.

Inside, the church has a five-bay nave and four-bay side aisles, double lancet and triple lancet windows, rose windows, cinquefoil windows, and a pointed-arch five-light East Window with geometrical limestone tracery. There are colonettes with dressed stone capitals and floral capitals, and a visually magnificent array of stained-glass windows. 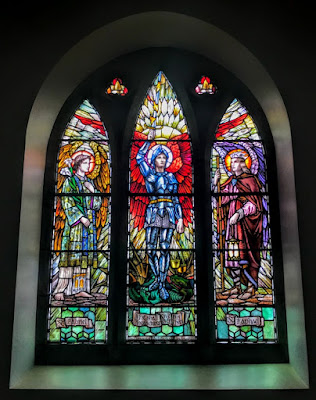 The main altar and the side altars have ornate sculpted marble reredoses. The pointed arcades of the side aisles with continuous hood-moulding and with human head stops, over clustered marble columns with vegetal capitals. The decorative marble gallery over the entrance end of the nave is supported on an arcade of brown marble columns. There is a timber scissors truss roof with braces supported on ornate corbels linked by moulded string courses.

The sandstone water font at the West Door is probably the mediaeval font from the early cathedral that stood in the adjoining churchyard.

The stained-glass windows are the work of the Mayer Studios of Munich and Dublin, James Watson of Youghal, Sarah Purser and Alfred Ernest Child, Michael Healy, Catherine O’Brien and other members of An Túr Gloine studios.

Dermot O’Hurley and Terence Albert O’Brien were among the 17 Irish martyrs beatified by Pope John Paul II in Rome on 27 September 1992. 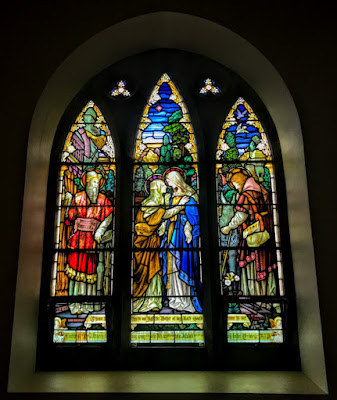 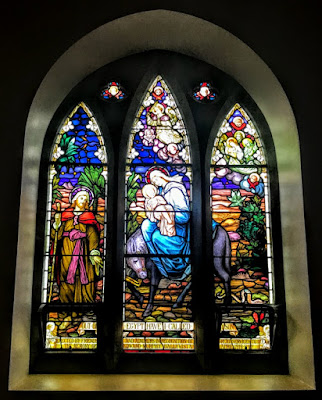 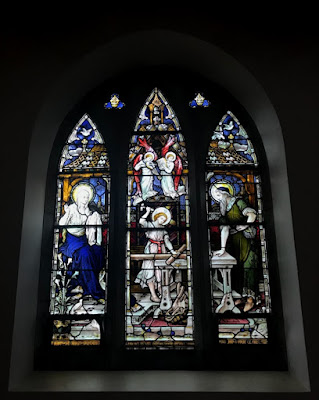 A window in Saint Ailbe’s Church, Emly, depicting the young Christ in the family home and workshop in Nazareth (Photograph: Patrick Comerford, 2018) 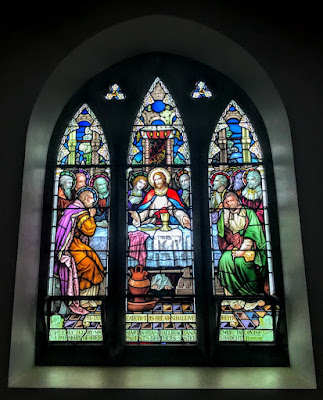 A window in Saint Ailbe’s Church, Emly, depicting the Last Supper … notice Judas to the right without a halo but holding the purse (Photograph: Patrick Comerford, 2018) 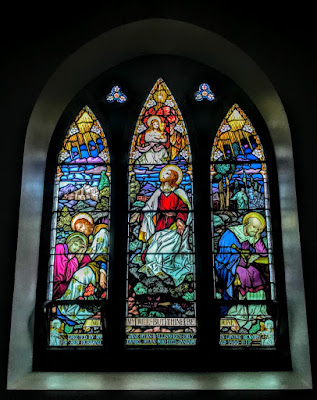 This morning: The Cathedral of Saint Alibeus, Emly, Co Tipperary.

Magisterial architectural anlaysis.Towering as Croke was, he was never made a cardinal.