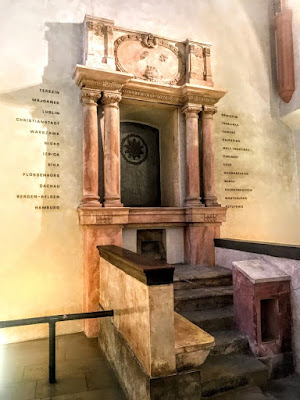 The names of concentration camps in lettering around the Aron haKodesh or Holy Ark in the Pinkas Synagogue in Prague … the attack on the Jewish quarter in Prague in 1559, when homes and synagogues were looted and burned, is one the events recalled on The Fast of Tammuz (Photograph: Patrick Comerford)

This fast day on the Seventeenth of Tammuz falls on the 17th day of the 4th Hebrew month of Tammuz and marks the beginning of the three-week mourning period leading up to Tisha B’Av. The fast has been pushed to Sunday this year (18th Tammuz) because the 17th fell on the Sabbath today (16 June).

According to the Mishnah, five calamities befell the Jewish people on the day:

• Moses broke the two tablets of stone on Mount Sinai;
• the daily korban or tamid offering ceased to be brought;
• the city walls were breached during the Roman siege of Jerusalem, leading to the destruction of the Second Temple on Tisha B’Av;
• before Bar Kokhba’s revolt, the Roman military leader Apostomus burned a Torah scroll; • King Menashe, one of the worst of the Jewish kings, placed an idol placed in the Holy Sanctuary of the Temple.

• the walls of Jerusalem being breached in 1095 during the First Crusade;
• Pope Gregory IX confiscating all manuscripts of the Talmud in 1239;
• the attacks on Jewish communities in Toledo and Jaen in 1391, when more than 4,000 Jews were murdered;
• the attack on the Jewish quarter in Prague in 1559, when homes and synagogues were looted and burned;
• the liquidation of the Kovno Ghetto in 1944.

During the morning service on the 17th of Tammuz, a paragraph is added to the Amidah prayer, Avinu Malkeinu is recited, and there is a special Torah reading.

During the afternoon service, all of the changes to the morning service are repeated, and Ashkenazim read a special Haftarah from the Book of Isaiah. Sephardim add the prayer Aneinu to the Shaharit Amidah.

In his reflection on the Fast of Tammuz in this week’s newsletter of the Spanish and Portuguese or Sephardic Community (Spin Newsletter) Rabbi Joseph Dweck of Bevis Marks Synagogue, says the tenor of this fast is set by the account of Moses coming down Mount Sinai to find the Golden Calf and shattering the tablets of the Ten Commandments when he sees it.

He writes, ‘It is important to note that what caused Moses to shatter the tablets was not simply the golden, graven image. But something far more concerning — the people were dancing in circuits around it. It was when he saw that that he threw down the tablets.’

He continues: ‘It is one thing to make false projections onto reality. The Golden Calf was one such projection. We all do it as human beings because we do not ascertain reality accurately simply because we sense or experience something. It takes a lot of testing and reconsideration in order to approximate reality most accurately. What this requires is an openness to redefining or removing our prior thoughts and assertions.

‘What Moses found was the opposite. The people had not just created a false God, they bowed to it, sacrificed to it, and closed a circuit around it that was essentially impervious to any outside input. They had gone after their projections hook, line, and sinker. This meant that the ability to reconnect with the real world was essentially closed. Moses shattered the tablets to shatter their walls of illusion ...

‘On the 17th of Tamuz we consider our perceptions of reality. What is working and what isn’t? And what are we holding on to at all costs despite life’s signals telling us that they are not viable? Tough questions that beg tougher answers. But on the fast day this is the area we explore. In doing so we commit as a people to living more real and relevant lives and in doing so, better ourselves, our people, and connect with God.’

For my reflections this evening, I am contemplating the words of the prayer Alienu: