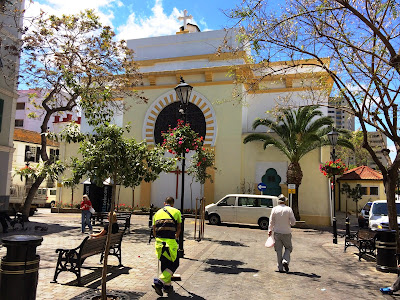 The Cathedral of the Holy Trinity, the Anglican cathedral in Gibraltar, was built in 1825-1832 and is noted for its Moorish revival-style architecture (Photograph: Patrick Comerford)

During the Seasons of Lent and Easter and in the week after the Day of Pentecost, I took some time each morning to reflect in these ways:

Today is Trinity Sunday, and since last Monday (24 May 2021), the day after Pentecost, we have been in Ordinary Time in the Church Calendar. Having posted photographs from over 100 churches, cathedrals, chapels and synagogues in recent weeks, I have decided to continue this prayer diary in Ordinary Time.

To mark Trinity Sunday today (30 May 2021), my photographs this morning are from the Cathedral of the Holy Trinity, Gibraltar, and later this week my photographs are from six cathedrals in Spain. 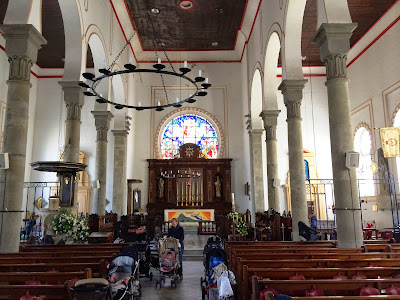 Inside the Cathedral of the Holy Trinity … one of three cathedrals serving the Diocese in Europe (Photograph: Patrick Comerford)

The Cathedral of the Holy Trinity in Cathedral Square was originally built as a church for the Anglican civilian population. The cathedrak was built in 1825-1832, and is noted for its Moorish revival architecture. It was consecrated in 1838 in the presence of Queen Adelaide. With the formation of the Diocese of Gibraltar it became a cathedral in 1842. Today it is one of the three cathedrals of the Diocese in Europe – the other two are in Brussels and Valetta, Malta.

After World War II, new vestries were added along with a second chapel dedicated to Saint George in memory of those who died in the Mediterranean during World War II, and a small stone with a cross from the ruins of Coventry Cathedral was set into the wall.

An explosion in 1951 caused substantial damage to the cathedral, lifting the roof and smashing the stained glass.

The Bishop of Gibraltar in Europe, Bishop Rob Innes, a former Chancellor of the Pro-Cathedral of Holy Trinity Brussels, was consecrated bishop on 20 July 2014. The Archdeaconry of Gibraltar, Italy and Malta consists of Andorra, Gibraltar, Italy, Malta, Morocco, Portugal and Spain. Archdeacon David Waller, who was appointed in 2020, is based in Fuengirola on the Costa del Sol, and crosses the tiny border almost every day.

The Very Revd Ian Tarrant has been the Dean of Gibraltar since last October (13 October 2020). The cathedral ministry is a visible witness to Christian compassion and social conscience, working with migrant workers and refugees and using the cathedral space for crèche and counselling facilities.

Gibraltar is an open, tolerant society, with a large and visible Jewish community. Roman Catholics are in the majority (78 per cent), but the Anglican presence (7 per cent) remains significant. 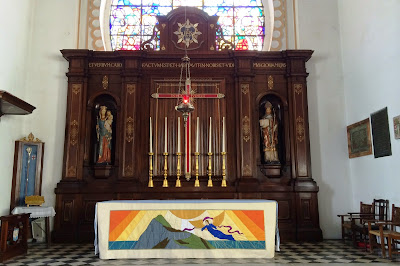 The High Altar in the Cathedral of the Holy Trinity, Gibraltar (Photograph: Patrick Comerford)

11 ‘Very truly, I tell you, we speak of what we know and testify to what we have seen; yet you do not receive our testimony. 12 If I have told you about earthly things and you do not believe, how can you believe if I tell you about heavenly things? 13 No one has ascended into heaven except the one who descended from heaven, the Son of Man. 14 And just as Moses lifted up the serpent in the wilderness, so must the Son of Man be lifted up, 15 that whoever believes in him may have eternal life.

17 ‘Indeed, God did not send the Son into the world to condemn the world, but in order that the world might be saved through him.

A modern icon of the Trinity in the Cathedral of the Holy Trinity, Gibraltar (Photograph: Patrick Comerford)

The Prayer in the USPG Prayer Diary today (Trinity Sunday, 30 May 2021) invites us to pray:

Loving God,
May we be inspired by your divine partnership,
As we work with our partners.
Let us learn from each other and grow in fellowship. 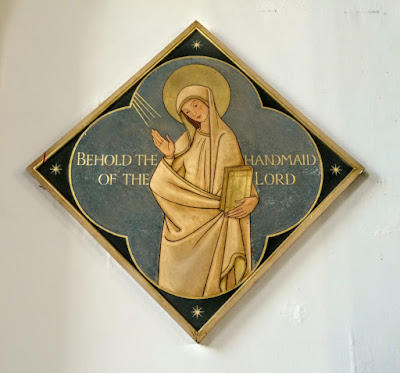 The Annunciation depicted in the Cathedral of the Holy Trinity in Gibraltar … tomorrow (31 May) is the Feast of the Visitation (Photograph: Patrick Comerford)