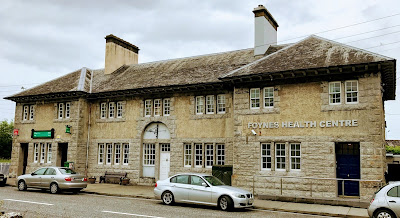 The Post Office and Health Centre in Foynes, designed by William Clifford House, are all that remain of Inigo Jones’s plans for a Market Square (Photograph: Patrick Comerford, 2017)

Adare owes much of it beauty and its attractive streetscape to the benign interest and foresight of the local landlords, the Earls of Dunraven, who lived at Adare Manor.

In a similar way, the Spring Rice family of Mount Trenchard, who held the title of Lord Monteagle, tried to develop the estates they owned at the small port town of Foynes and, to a lesser degree, Foynes.

It is as though Monteagle was not to be outdone by Dunraven. Although their tenanted lands were being sold off by the beginning of the 20th century, both families had a keen interest in developing their estate town, and it was a healthy competition that enhanced the lifestyle of their tenants.

Monteagle commissioned Francis Inigo Jones (1866-1950), a fashionable architect, artist and garden designer, to bring his vision to daylight. Inigo Thomas was a nephew of Broderick Thomas (1811-1898), one of the principal landscape garden designers in the latter half of the 19th century.

Broderick Thomas was employed by Queen Victoria at Buckingham Palace and Sandringham. In Ireland, he designed a large parterre at Baronscourt, Co Tyrone, for the Duke of Abercorn, drew up plans for the gardens at Powerscourt, Co Wicklow, for Lord Powerscourt, and was asked by Charles Powell Leslie in the 1860s to decide which trees at Glaslough, Co Monaghan, should be felled to make room for Castle Leslie, which was being rebuilt.

In 1893, Inigo Thomas paid an extended visit to Italy that had a profound influence on his work. He designed outstanding gardens at Athelhampton, Barrow Court (near Bristol), Chantmarle (Dorset), Rotherfield Hall (East Sussex), and, possibly, Parnham (Dorset). As well as designing numerous formal gardens, he illustrated Sir Reginald Blomfield’s book The Formal Garden in England (1892).

Although for many garden lovers his masterpieces at Athelhampton and Chantmarle are among the most exquisite English gardens of their time, Inigo Thomas remains a somewhat shadowy figure.

Thomas trained in the office of the architects George Frederick Bodley (1827-1907) and Thomas Garner (1839-1906). Bodley was a pupil of Sir George Gilbert Scott and he worked closely with William Morris for much of his career. He was one of the most important architects of the Tractarian Movement, and designed or restored over 100 cathedrals and churches in the Gothic Revival style, favoured by AWN Pugin and of whom Scott was among the great exponents.

Bodley’s biographer Michael Hall argues he ‘fundamentally shaped the architecture, art, and design of the Anglican Church throughout England and the world.’ In Cambridge, he is associated with at All Saints’ Church, Jesus Lane, and redesigned Saint Botolph’s Church on Trumpington Street. His churches in Staffordshire include the Church of the Holy Angels, Hoar Cross (1871-1872), the Mission Church, Hadley End (1901), and Saint Chad’s Church, Burton-on-Trent (1903-1910).

Around 1900, working on his commission from Lord Monteagle, Inigo Thomas designed a Market Square for Foynes, with 20 shops and cottages arranged into a symmetrical layout centred on a traditional arcaded market house. This would face a bank and post office, with two pools at the rear.

The buildings were to have the generous, wide-eaved roofs and comfortable horizontal detailing associated with the Arts and Crafts style, with classical formality and detailing for the market house and bridges.

In addition, Inigo Thomas drew up designs for his terraces of cottages to the east of his proposed Market Square.

Sadly, the scheme was never realised, apart from the building now houses the Post Office and Health Centre in Foynes. This building, which was designed by William Clifford Smith, is an attractive example of early 20th century Arts and Crafts style architecture, and its form, size and scale mark it out in the streetscape.

William Clifford Smith (1881-1954) was an inventive young English architect who came to Limerick in 1902 when he won an international competition to design a new clubhouse for Shannon Rowing Club. This is the oldest rowing club in Limerick City, and was founded in 1866 by the Limerick entrepreneur Sir Peter Tait.

The highly elaborate new clubhouse, which was completed in 1905, was designed by Clifford Smith in the Edwardian Arts and Crafts idiom. This is such a fine example of Edwardian architecture that, as far as I know, it is the only listed sports building in Ireland.

The characteristic features of Clifford Smith’s main building in Foynes, now housing the Post Office and Health Centre, include the rusticated arch, projecting bays, the overhanging eaves and the quadripartite windows, which serve to emphasise the long rectangular H-plan form and to underscore the horizontal detailing.

The rusticated limestone walls to the ground floor contrast with the rendered upper floor and give the building an interesting façade.

This detached, H-plan, seven-bay two-storey building, which was built as a post office and bank, was built around 1910. There are recent extensions to the rear or north elevation.

The building has a hipped slate roof with rendered chimney-stacks, over-hanging eaves and timber brackets. The rough-cast rendered walls at first-floor level have rusticated limestone quoins. On the ground floor, the rusticated coursed limestone walls have a rusticated plinth course.

At the east end of Foynes, Creveen Cottages form a symmetrical and picturesque terrace of six handsome houses also designed around 1910 by William Clifford Smith. This terrace is distinguished by its distinctive roofline and rendered walls, with well-crafted limestone dressings. The long, low form of the terrace and the broken massing give it a domestic scale.

No 1, which forms a handsome terminus of this terrace, is an end-of-terrace, two-bay, two-storey with a dormer attic house. The hipped slate roof has terracotta ridge tiles, over-hanging eaves, timber brackets and rendered chimney-stacks. The rough-cast rendered walls have a rock-faced limestone stringcourse. The square-headed openings have replacement uPVC windows and rock-faced limestone sills, and there is a replacement uPVC door. 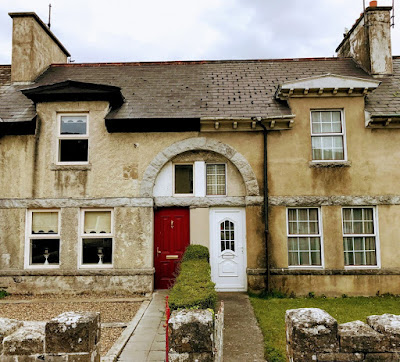 There are many interesting shop fronts throughout Foynes. For example, E O’Connor, which was built a decade earlier, around 1900, is a notable example of the tradition of combined dwelling and shop, complete with a finely crafted tripartite shopfront. The various window types and brick dressings make this end-of-terrace three-bay two-storey house and former shop stand out on the streetscape of Foynes.

Meanwhile, by 1911, Clifford Smith was boarding in the home of Elizabeth McCarthy on Ennis Road. He may have served in the Royal Engineers during World War I. But he returned to Limerick after the war, and in 1919 he designed what is now the Belltable Arts Centre at 69 O’Connell Street. He worked from 75 O'Connell Street for much of his career. In 1928, he formed a partnership with Edward Newenham, known as Clifford Smith & Newenham. 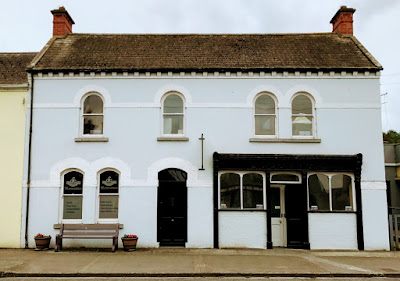 Patrick, thanks for writing such a great article. I am very interested in finding out more information in relation to 'Willian Clifford Smith' and 'Creveen Cottages' it would be great if you could point me in the right direction or would have any other info on same. (old maps/drawings etc.) Keep up the great work and every success to you for 2019. thanks.