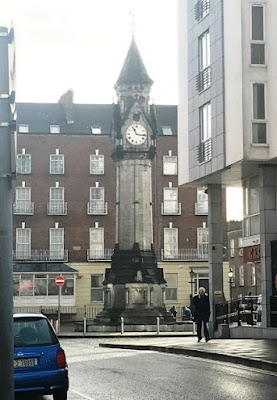 Waiting for buses in Limerick, going to or from Dublin or Askeaton, is allowing me a little time each week to explore the history and architecture of a city I am beginning to get to know.

One of my routes between the bus station and Arthur’s Quay brings me past the Tait Memorial Clock in Baker Place, which was erected 150 years ago in 1867 and which tells stories of enterprise and industry, war and politics, and which links Limerick in a sad and telling way with Thessaloniki in northern Greece.

The Tait Memorial Clock is a 65 ft tall landmark monument on Baker Place, at the corner with Davis Street. This free-standing, carved limestone Gothic-style clock tower was erected in 1867 as a public tribute to the Scottish entrepreneur Alderman Sir Peter Tait.

Tait owned the nearby Tait factory, which supplied shirts and uniforms to the British Empire during the Crimean War in the 1850s and to the Confederate army during the American Civil War in the 1860s.

Tait moved to Limerick from the Shetland Islands in the early 1840s, and built a trading business that grew into the city’s largest textile factory. At the outbreak of the American Civil War in 1861, Tait’s factory was producing enough textiles to supply the Confederate Army with jackets, trousers, caps, shirts, blankets, boots, stockings, and haversacks. Alongside his textile trade, Peter Tait served three terms as Mayor of Limerick between 1865 and 1868. Such was his reputation as an employer and politician that the Tait Clock Tower was erected as a tribute to him and was paid for by public subscriptions.

Sir Peter Tait (1828-1890) is one of the most colourful, flamboyant and entrepreneurial figures to have become Mayor of Limerick, and his life story brought him from the Shetland Islands to Limerick, London, and the Ottoman and Tsarist empires. He was born in 1828 in the Shetland Islands in Scotland, either in Lerwick or in the rural district of Tingwall. He came to Limerick in his early teens, and may have first lived with his sister who had already moved to Limerick some years earlier. She had married Martin Honan, of Quinsborough House, Parteen, who was Mayor of Limerick in 1842 and 1843, and her father-in-law, Matthew Honan, built and gave his name to one of the quays in Limerick.

Tait soon apprenticed himself to the drapers Cumine and Mitchell in George’s Street (now O’Connell Street). He then began hawking shirts to sailors on Arthur’s Quay, and was soon making and selling his own shirts.

Tait quickly spotted the opportunities provided by the new sewing machines. He started his first factory in 1850 in rented premises in Bedford Row. In 1852, he set up one of the first mass production textile factories in Europe, from which he sold shirts and other clothing.

His big break came with the outbreak of the Crimean War in 1854, when Tait won contracts to supply the British army with uniforms. He was soon employing hundreds of people making shirts and uniforms for the troops in the Crimean War. The first soldiers to wear his Limerick shirts were in the 8th Royal Irish Hussars.

Meanwhile, Tait married Rose Abraham, who lived at Fort Prospect, near Janesboro, in the Independent Chapel or Congregationalist Church on Bedford Row, Limerick. The couple moved to South Hill House in the southern suburbs of Limerick.

Tait’s factory was the biggest in Limerick, and his business was known as the Army Clothing Factory. He had another factory in London, near Blackfriars Railway Bridge.

By the time of the American Civil War, Tait had a large factory in Limerick that was described as a set of ‘mean cheap buildings’ that employed up to 1,000 workers.

In late 1863, the firm contracted with the Confederate Government for the supply of jackets and trousers. Most Tait jackets and trousers were issued to the Army of Northern Virginia, although a large number was also issued to units in the Army of Tennessee and the garrison units along the east coast. As well as his contract with the Central Confederate Government, Tait also had a separate contract with the State of Alabama.

As well as making uniforms for the Confederates, Tait also ran them through the blockade in his own steamers, the Elavey, Eveline and Kelpie, none of which was captured. It is impossible to estimate how many uniforms were imported, but the bulk of the contract started to arrive in the autumn of 1864.

The ships he sent to the Confederate States returned to Limerick loaded with cotton for the clothing factories and shops. In 1864, Tait also revived the flax spinning industry in Limerick, reopening a factory that had first been established by the Russell family in Lansdowne in 1851. He also opened factories in Leeds and London, and bought a townhouse in London.

One shipment of 4,400 uniforms on the Eveline arrived in Wilmington on 29 December 1864. But the fall of Fort Fisher on 15 January 1865 probably put an end to any further shipments.

Tait was elected an Alderman in Limerick for the first time in 1865. He was elected Mayor of Limerick in December 1866, and was elected to that office on three occasions.

The clock in Baker Place was erected in 1867 as public tribute to Tait while he was still Mayor of Limerick. It was designed by William Edward Corbett (1824-1904), who acknowledged the influence of the design of Big Ben at the Houses of Parliament in Westminster. The tower was built by John Connolly at a cost of £750.

Corbett, who designed the clock tower, was the architect and borough surveyor of Limerick City (1854-1899), and lived at 39 Ennis Road, Limerick. He worked on a number of prominent churches in Limerick, and designed the pedestal of the Treaty Stone.

A plaque on a panel reads: ‘Erected by Public Subscription in Appreciation of the Enterprise and Usefulness of Alderman Peter Tait.’

But despite the public honour he received with a knighthood, and the public acclamation expressed in the erection of the Tait Clock in Baker Place in 1867, Tait’s Conservative political views grew increasingly unpopular in Limerick, and his fall from grace was swift.

In December 1868, Tait was defeated as the Conservative candidate for Parliament in Limerick in a brutal election campaign. He resigned as mayor on 1 December 1868, not having completed his third term in office.

Ostensibly, his resignation was to give him time to concentrate on his shipping interests. But one by one his factories began to close because of a general depression in the clothing market.

In 1871, Tait was defeated yet again, this time in a by-election. By 1874, he had changed his political views, and stood as a Liberal/Home Rule candidate, but was defeated by the Nationalist Isaac Butt. Tait retired from the business and left Limerick for good around 1875, leaving his factory to be run by his son.

Tait left for London and the moved to Thessaloniki in northern Greece to establish a Turkish cigarette factory. However, this venture was not a success, and he died in poverty at the Hotel De France in Batoum in southern Russia on 11 December 1890 at the age of 62. He bequeathed his belongs of books, furniture and linen and the sum of just £50 to his wife Rose.

It was a sad end for a remarkable man whose life in Limerick was marked by enterprise, courage, ambition and vision. An authoritative biography, Peter Tait: A Remarkable Story, by John E Waite, was published in 2005.

Tait's sister was not married to Martin Honan. He married Anne Marie Kane of Whitehall in 1826 and she lived until 1866.
I am not sure who started this rumour but it is easily proven false. Tait more than likely arrived in Limerick following a call for educated Presbyterians to work in the Presbyterians store of Cumine and Mitchel.