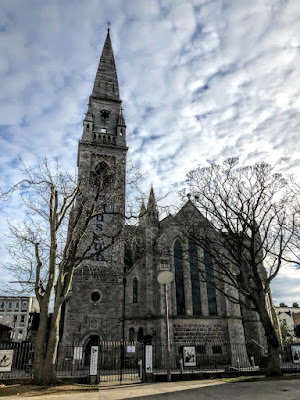 The National Maritime Museum of Ireland is housed in the Mariners’ Church, a former Church of Ireland parish church on Haigh Terrace in the centre of Dún Laoghaire.

The church was built by subscriptions for a new church for seafarers, with an opening donation in 1836 of £1,000 for the endowment as the ‘Protestant Episcopal Mariners’ Church at Kingstown Harbour.’

Dún Laoghaire was then known as Kingstown, and as the town and harbour grew in importance in the first decades of the 19th century, the Church of Ireland realised the need for a church for naval officers, sailors and mariners.

The church was designed by the architect Joseph Welland (1798-1860), and at first, the church just had a nave and transepts. Welland was the architect for the Board of First Fruits and later the Ecclesiastical Commissioners. While he was working with John Bowden and the Board of First Fruits, Welland shared some of Bowden’s works, including include Saint Philip and Saint James Church, Booterstown, and Saint Stephen’s Church, Mount Street, both of which Welland completed after Bowden died in 1821.

The Mariners’ Church was consecrated on 25 June 1843 and it was assigned a parochial district as a chapel of ease in Monkstown Parish in 1845. 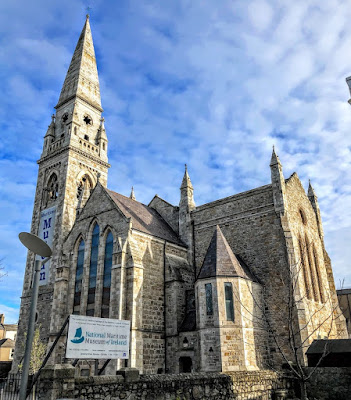 The Mariners’ Church was designed by the architect Joseph Welland, and at first just had a nave and transepts (Photograph: Patrick Comerford, 2020)

The Revd Richard Sinclair Brooke (1802-1882) was the first chaplain or incumbent of the Mariners’ Church (1836-1862). He described the church as ‘large and gaunt and lofty and ugly, a satire on taste, a libel of all ecclesiastical rule, mocking at proportion and symmetry.’

Members of the Royal Navy attended Sunday services in the Mariners’ Church, and those in detention were seated in the ‘Prisoners’ Dock’ or special enclosed pews.

Brooke was also the father of the Revd Stopford Augustus Brooke (1832-1916), who was a royal chaplain to Queen Victoria and later became a Unitarian. Stopford Brooke is also known for his version of ‘Silent Night.’

The original austerity of Welland’s work was enlivened by Raffles Brown, who added the unusual spire in 1865. After several fund-raising efforts by the parishioners, much-needed renovations were carried out in 1870.

Windle became Vicar of Market Rasen, in Lincolnshire, in 1875. His son, Sir Bertram Windle, was president of Queen’s College Cork.

Windle was succeeded at the Mariners’ Church by the Revd William Edward Burroughs, who was the Rector in 1876-1895. A former curate of Saint Michael’s, Limerick, during his time further work was carried out on the church in 1884, including the addition of the chancel.

This work was designed by the architect Sir Thomas Drew (1838-1910) and was carried out by Bolton of Rathmines. During this work, however, a fatal accident took place on 10 September 1884. Scaffolding collapsed while two men were plastering the ceiling, 50 ft (15.2 metres) above ground. One plasterer, Hemp, died soon afterwards; the other was seriously injured. The church reopened on 14 October 1884. 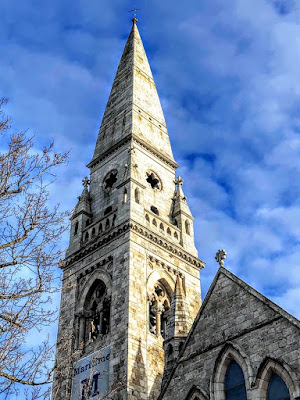 Later rectors of the Mariners’ Church included John Lindsey Darling (1895-1911); Canon Herbert Brownlow Kennedy (1912-1921), later Dean of Christ Church Cathedral, Dublin (1921-1938), and general secretary of the General Synod of the Church of Ireland – during his time, the church was vested in the Representative Church Body in 1917; and Canon Albert Edward Hughes (1922-1923).

The church could seat 1,400 people and the Deed of Trust stated that one third of the seating was to accommodate the families of those in the seafaring, coastguard and revenue services.

For generations, the Mariners’ Church was the principal Church of Ireland church in Dún Laoghaire. It depended for its upkeep to a large extent on voluntary subscriptions, donations, bequests and fundraising efforts. The World War I Memorial in the church records the names of people connected with the church who died in the Great War.

However, the congregation of the Mariners’ Church dwindled in the mid-20th century, and the church closed for worship after a final service on 2 April 1972. A new chapel named in honour of Saint Columba was dedicated in the south transept of Christ Church, Dún Laoghaire, on 8 June 1975. The altar in that chapel is from the Mariners’ Church.

Meanwhile, shortly after the church closed, a lease was signed by the Church of Ireland and the Maritime Institute in 1974. The National Maritime Museum of Ireland was opened by President Patrick Hillery in 1978. The Institute bought the building in 2007. Renovations in 2011 included improvements to the roof, interior, and electrical systems. 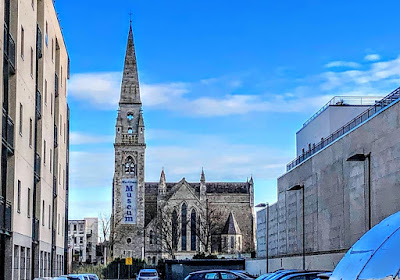 The Mariners’ Church closed for worship after a final service on 2 April 1972 (Photograph: Patrick Comerford, 2020)