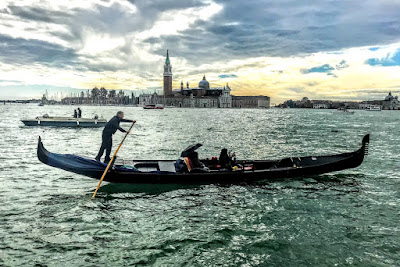 San Giorgio Maggiore is a landmark building in Venice just beyond the entrance to the Grand Canal (Photograph: Patrick Comerford)

My photographs this week are from churches in Venice. This morning (23 June 2021), my photographs are from the Church of San Giorgio Maggiore. 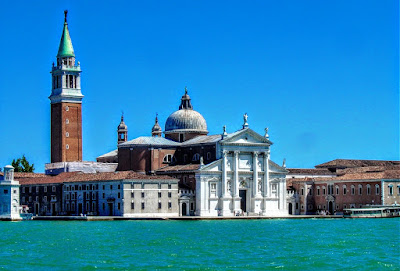 The white marble of San Giorgio Maggiore gleams above the blue water of the lagoon and forms the focal point of the view from every part of the Riva degli Schiavoni (Photograph: Patrick Comerford)

San Giorgio Maggiore can be seen clearly from Saint Mark’s Square. It is a landmark building just beyond the entrance to the Grand Canal, yet it is visited by few tourists during their brief stay in Venice. But this 16th-century Benedictine church on an island that shares the same name is of architectural importance and was designed by the great architect of Venice, Andrea Palladio.

The church and monastery on the island were rebuilt after the earthquake. The church, which had a nave with side chapels, was not in the same position as the present church, but stood farther back at the side of a small campo or square. The cloisters in front were demolished in 1516, and from 1521 the monks began planning a new church.

Palladio arrived in Venice in 1560, when the refectory of the monastery was being rebuilt. He made improvements to this, and in 1565 he was asked to prepare a model for a new church.

His model was completed in 1566 and the foundation stone was laid in the presence of the Pope that year. The work was not finished before Palladio died in 1580, but the body of the church was complete by 1575 apart from the choir behind the altar and the façade. The decoration of the interior was completed later and the choir was built between 1580 and 1589.

The campanile or bell tower is a landmark on the skyline of Venice, but was not designed by Palladio. It was first built in 1467, fell in 1774, and rebuilt in neo-classic style by 1791.

The façade of the church is a brilliant white and represents Palladio’s solution to the difficulty of adapting a classical façade to the form of this church, with its high nave and low side aisles. On either side of the central portal are statues of Saint George and of Saint Stephen, the patrons of the church.

Two very large paintings by Jacopo Tintoretto, ‘The Last Supper’ and ‘The Fall of Manna,’ depict the institution of the Eucharist. In the Cappella dei Morti or mortuary, a second painting by Tintoretto depicts ‘The Entombment of Christ.’

A chapel associated with the Morosini family, who gave their name to the Morisini fountain in Iraklion in Crete, is dedicated to Saint Andrew. Here a painting by Jacopo and Domenico Tintoretto depicts ‘The Risen Christ and Saint Andrew with Vincenzo Morosini and members of his family.’ Other works in the chapel are by Jacopo and Domenico Tintoretto and Leandro Bassano.

[Jesus said:] 15 ‘Beware of false prophets, who come to you in sheep’s clothing but inwardly are ravenous wolves. 16 You will know them by their fruits. Are grapes gathered from thorns, or figs from thistles? 17 In the same way, every good tree bears good fruit, but the bad tree bears bad fruit. 18 A good tree cannot bear bad fruit, nor can a bad tree bear good fruit. 19 Every tree that does not bear good fruit is cut down and thrown into the fire. 20 Thus you will know them by their fruits.’

The campanile or bell tower of San Giorgio Maggiore is a landmark on the skyline of Venice (Photograph: Patrick Comerford)

The Prayer in the USPG Prayer Diary today (23 June 2021, International Widows’ Day) invites us to pray:

Let us pray for resolution to the injustice that widows face, particularly in Africa and Asia. May we support the United Nations in its efforts to bring this issue to light, and that justice may be done. 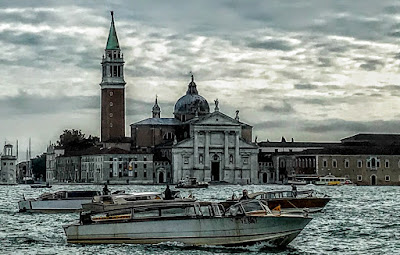 The church and monastery were built by Palladio in the late 16th century (Photograph: Patrick Comerford)