Praying in Lent and Easter 2021:
81, Saint Catherine of Sinai, Iraklion 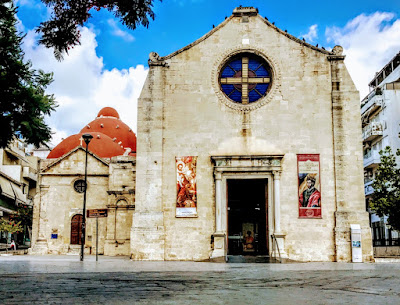 The Museum of Christian Art in Iraklion opened in the Church of Saint Catherine of Sinai in 2015 (Photograph: Patrick Comerford)

Until the pandemic lockdown, I have been visiting Crete regularly since the 1980s. As Easter Week comes to a close in Greece today, my photographs this morning include an icon of the Resurrection in a church museum in Iraklion.

My photographs this morning (8 May 2021) are from the Church of Saint Catherine of Sinai, a tiny church in a quiet square in Iraklion, nestling beneath the shadows of Saint Minas Cathedral.

The church was probably built in the 13th century or even earlier as a metochion or autonomous ‘embassy church’ of the Monastery of Saint Catherine on Mount Sinai. From the 15th century on, this unique church was at the centre of academic and cultural life in Crete, and was associated with some of the greatest writers, poets and artists who brought together the worlds of Byzantium and Venice for the best part of two centuries.

Many of the artists and writers there worked comfortably in Italian and Greek contexts, giving their productions a flavour that is unique. The influence of this school on iconography throughout the Orthodox world is incalculable, and it has influenced Western art through one of its best-known pupils, Doménikos Theotokópoulos (1541-1614), better known as El Greco.

Iraklion was known to the Venetians as Candia, and was one of the last outposts of the Venetian Empire in the East Mediterranean. With the fall of the Byzantine Empire in 1453, Venetians and Cretans found a new common ground in their resistance to Turkish Empire. Western innovations mingled with the Byzantine tradition in a creative manner that was expressed in the unique styles of art and architecture in Crete.

As the reputation of the Cretan painters spread, so the demand for their works increased. Over 100 painters, organised in unions, lived and worked in Iraklion. Their clients included the great Orthodox and Catholic monasteries, noble families, wealthy merchants and the prosperous traders and merchants.

They were particularly associated with the Church of Saint Catherine of Sinai, part of the richest and largest monastery in Crete, with over 100 monks and up to 150 icon painters.

In the late 16th century, George Klontzas, Mikhail Damaskinos and other painters in Crete, strongly influenced by the trends in Italian mannerism, began experimenting in new ways of representing their themes, and brought the influence of Renaissance painting.

Damaskinos travelled to Venice at a time when painters such at Titian, Veronese and Tintoretto reached their creative peak. He also worked in Messina in Sicily before returning to Crete in 1583 to create works that marry Byzantine and western values.

He worked in the period that was most productive culturally in Crete. Highly-skilled and educated, he could easily paint in both the Byzantine and the Western style. The icons in the museum include six important works by Damaskinos that are marked by his acute attention to detail: the Adoration of the Magi; the Last Supper; ‘Noli me Tangere’; the Burning Bush; the First Council of Nicaea; and the Divine Liturgy.

In this setting, Damaskinos trained his best-known pupil, Doménikos Theotokópoulos, later known as El Greco. The few surviving examples of El Greco’s early work in Crete include his icon of the Dormition of the Virgin, now in Syros, and his icon of Saint Luke painting the Virgin.

Candia was the first town the Venetians conquered in Crete, and it was the last city they left when it fell to the Ottoman Turks 450 years later, after a fierce resistance that lasted 21 years until 1669.

When Iraklion fell in 1669, the academy came to an end, and like many churches in Crete at the time Saint Catherine’s was converted into a mosque. The church, once part of the largest and richest monastery on Crete, was stripped of its icons and relics and was turned into a mosque, named the Zoulfikiar Ali Tzamisi, although it was known popularly as Haghia Katerina Djamé.

The mosque at Saint Catherine’s was abandoned a few months after Crete was officially united with the modern Greek state in 1913, and in 1919 a decree was issued to return it to use as a church. From 1922 to 1935, it sheltered refugees who had arrived from Western Turkey, and by World War II it was in ruins. The Nazi occupiers used it as a machinery depot, petrol warehouse and car repair shop.

The presence of the Church of Saint Minas, and later the Cathedral of Saint Minas, in the square beside Saint Catherine’s, allowed the old church to become a museum of Cretan icons.

A Byzantine museum was housed in the church from the 1960s, but this closed in 2007. A new, modern museum was designed, with support from the Greek Ministry of Culture, and it opened in 2015 as the Museum of Christian Art, managed by the Educational and Cultural Foundation of the Archdiocese of Crete.

This is a showpiece museum, providing a complete picture of Church art and architecture in Crete from the 13th to the 17th century, and the collection in the museum spans a period up to the late 19th century.

It is interesting that the church continues to function as a dedicated church, and the Divine Liturgy is served twice a year in the Chapel of All Enlightened Saints of Crete in the north transept, on the first Sunday in July, when these saints are commemorated, and on 25 November, the feast day of Saint Catherine of Mount Sinai. 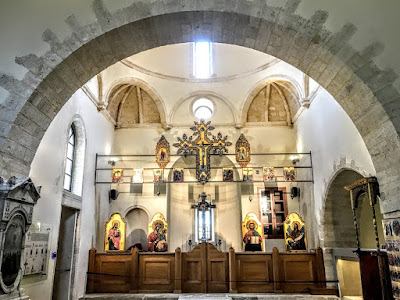 The Chapel of All Enlightened Saints of Crete in the north transept of the church (Photograph: Patrick Comerford)

[Jesus said:] 18 ‘If the world hates you, be aware that it hated me before it hated you. 19 If you belonged to the world, the world would love you as its own. Because you do not belong to the world, but I have chosen you out of the world – therefore the world hates you. 20 Remember the word that I said to you, “Servants are not greater than their master.” If they persecuted me, they will persecute you; if they kept my word, they will keep yours also. 21 But they will do all these things to you on account of my name, because they do not know him who sent me.’ 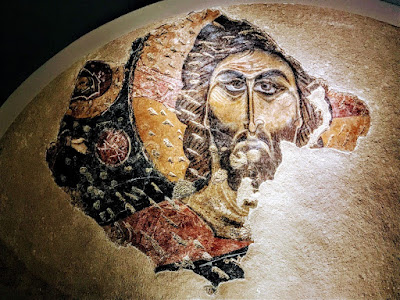 Christ Pantocrator … a fragment from a 13th century mural in the Church of the Archangel Michael in Preveliana in central Crete (Photograph: Patrick Comerford)

The Prayer in the USPG Prayer Diary today (8 May 2021) invites us to pray:

Let us pray for all discerning their vocation amidst uncertainty and fear. May they be guided by God in all they do. 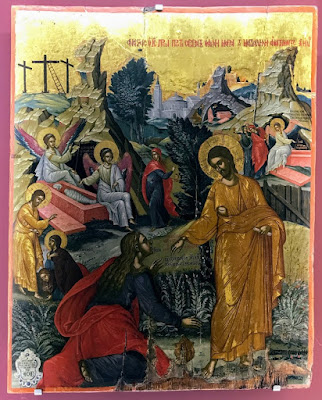 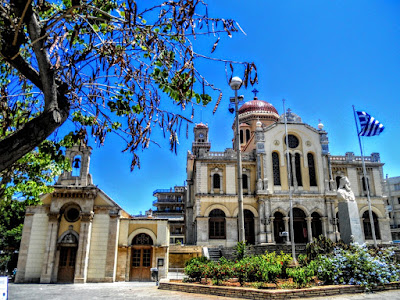 The Cathedral of Saint Minas and the smaller, older Church of Saint Minas, dominate the square in front of Saint Catherine and the Museum of Christian Art (Photograph: Patrick Comerford)