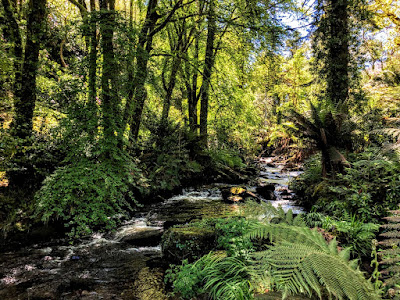 The Primeval Forest at Kells Bay is a 3 ha area of warm and damp forest (Photograph: Patrick Comerford, 2021)

Kells Bay House and Gardens at Kells, near Cahersiveen, Co Kerry, is on the north loop of the Ring of Kerry, facing out to Dingle Bay and the Blasket Islands. It is just 3 or 4 km from Cahirsiveen, and I visited Kells Bay last weekend to see its sub-tropical gardens, its waterfalls, its ‘Jurassic Park’ and its dinosaur sculptures, and to cross the ‘Himalayan SkyWalk’, the longest rope-bridge in Ireland.

Kells Bay Gardens has a renowned collection of tree-ferns and other exotic plants in a unique microclimate created by the Gulf Stream. The house and gardens date back to 1838, when the Blennerhassett family built a hunting lodge at Kells Bay. Rowland Blennerhassett first laid out formal gardens, and this work was continued by later families: Preece (1940), McCowan (1971) and Vogel (1982).

The house and lands were bought in 2006 by Billy Alexander, an expert in the propagation, growth and care of ferns. Since then, he has worked to restore the gardens and house sensitively and sustainably. 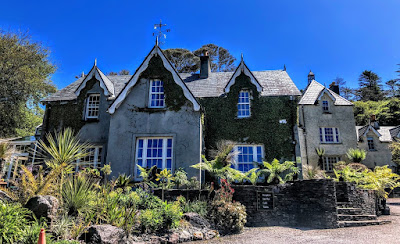 The centrepiece at Kells Bay is the ‘Primeval Forest’ of 600 Dicksonia Antarctica tree-ferns bordering the Ladies Walled Garden. It is said they are all descended from one mother fern planted in the walled garden in 1890. This Primeval Forest is a 3 ha area (7.5 acres) of warm and damp forest, with naturalised Dicksonia Antarctica, originally from Tasmania and Australia. The specimens range from those with parasol of fronds extending to 4 metres to seedlings growing in between crevices in the garden walls.

At the front of the house is a new succulent garden. The most significant plant there is the Jubaea chilensis, imported from Chile in 2006 and now well established.

The Bamboo Glade was laid out in 2009 with a shaded pool to expand the variety of plants in the garden. Plantings include Dendrocalamus hookeri and Phyllostachys bambusoides (Himalaya) and Magnolia doltsopa, and Rubus linearis (China).

The Gunnera Pool is a large expanse of Gunnera manicata (South America) accompanied by Richea pandanifolia and Athrotaxis cupressoides (Tasmania).

The series of dinosaur and chair sculptures in the garden was carved from fallen trees by Pieter Koning in 2008-2015 and provide an adventure trail for young visitors.

The Skywalk, Ireland’s longest rope-bridge, opened in 2017 and is 35 metres long and 12 metres high. 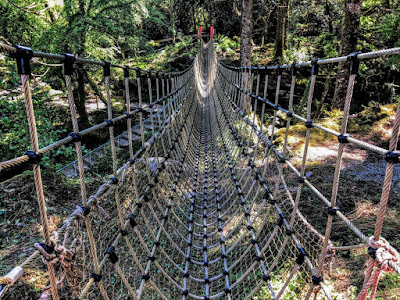 Sir Rowalnd Blennerhassett (1741-1821), who built the windmill at Belnnerville, was given the family title of baronet in 1809. His fourth son, Rowland Blennerhassett (1780-1854), bought land at Cappamore on the Ivergah Peninsula from the Marquis of Lansdowne in 1819, and in 1837 he built a ‘small hunting lodge’ first known as Hollymount Cottage.

Richard and Honoria were the parents of Rowland Ponsonby Blennerhassett (1850-1913). He was born at Hollymount Cottage and married Mary Beatrice Armstrong, a daughter of the art historian Walter Armstrong, in 1876. He was MP for Kerry (1872-1885), and one of the first elected Home Rule MPs. He extended Hollymount Cottage and renamed it Kells. They also had a house at 52 Hans Place, Chelsea, near the Chelsea Gardens.

Rowland Ponsonby Blennerhassett was responsible for additions to the garden that are still seen today. The exposed coastal location of Hollymount Cottage made planting the shelter belt necessary before creating the garden. The shelter belt trees, Abies grandis, date from about 1870. He established the Ladies Walled Garden adjacent to the front of the house for his wife Mary, planted the Primeval Forest and laid out the pathways through the gardens. 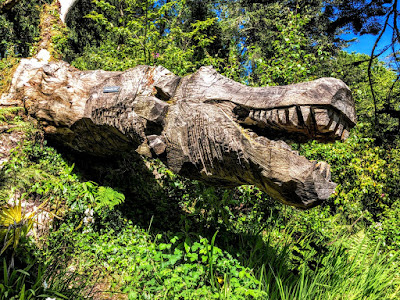 The principal influence on the estate at Kells at this time was the rising popularity of naturalistic gardens. The Wild Garden challenged the prevailing Victorian preference for formal landscaping and expansive carpet bedding by advocating for natural gardens in which hardy perennials and self-seeding annual plants would provide a sustainable and self-perpetuating display of plants and flowers.

The second influence on the garden at Kells Bay might also have been the Victorian craze for ferns that began around 1830 and reached its peak between 1850 and 1890. The tree fern Dicksonia Antarctica was introduced to Kells Garden at the turn of the century, part of the family of terrestrial ferns. But it is also said that that tree ferns were accidentally introduced to cultivation through the use of their trunks as ballast or weight, to prevent cargoes moving about during long sea journeys in the 19th century and replanted in gardens in Devon and Cornwall.

He was known to his estate workers as ‘Master Dick’ and married Silvia Myers in 1914. Their only child, Diana Mary Ponsonby Blennerhassett (1916-2000), was the last family member to live at Hollymount Cottage. Diana was born in Cambridge, and in 1939 she married Major Richard Goold-Adams (1916-1995) in Chelsea. He was the son of the Irish-born High Commissioner of Cyprus and Governor of Queensland, Sir Hamilton John Goold-Adams (1858-1920).

During this time, the Bowler family lived at Kells House as gardeners, caretaker and farm workers. The Kells estate was a working garden, growing fruit and vegetables at the front, between the house and the shoreline, and with geese, chickens and a herd of dairy cows. The estate traded as Kerry Estates and sold fruit, vegetables, and dairy produce to local hotels and retailers. A sawmill also processed wood from Kells and neighbouring estates. 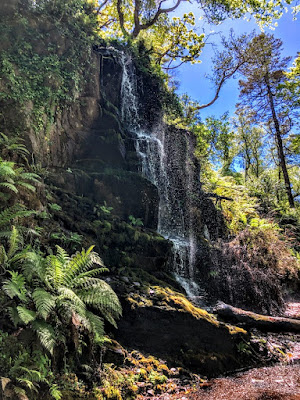 The waterfall by the entrance to Kells Bay Gardens (Photograph: Patrick Comerford, 2021)

When Roland and Nora Preece and the family owned Kells, they maintained the gardens and preserved the major parts of the plant collection, but there was little development of the house and gardens.

Iain McCowen bought the Kells estate in 1973. A pilot, he flew between England and Ireland on his own plane. President Erskine Childers had been a frequent visitor to Kells and local lore says he wrote his Presidential inauguration speech while staying at Kells in 1973.

McCowen planned to develop the house as a profit-making venture but sold in 1979 before marrying the Hon Phillipa Baillie in 1980; her mother was a granddaughter of the Duke of Devonshire.

Friedrich and Marianne Vogel, a German couple, bought Kells in 1979, and set up a nursery that traded as Kells Garden Centre and that was managed by Mary O’Sullivan, with John Bowler and his son, Michael Bowler, as head gardeners. But the Vogels sold Kells after the early death of their son.

William Alexander, a banker and fern enthusiast, bought the estate for €1.6 million in 2006. He has created several profitable income streams with the guest house, restaurant, plant sales and garden visitors, and he has expanded the naturalisation of rare and endangered subtropical plants.

After visiting the gardens, we sat on the terraces in front of Kells Bay House, sipping coffees from the Delligeenagh Café, and looking across the gardens to the beach at Kells Bay. It was a sunny, early summer day, and the beach was our next stop. 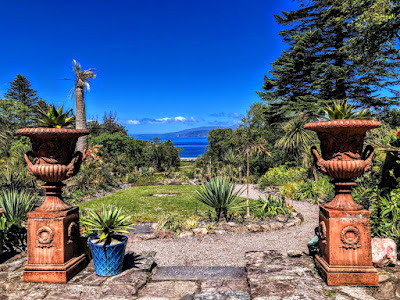 Looking across the gardens to the beach at Kells Bay (Photograph: Patrick Comerford, 2021)