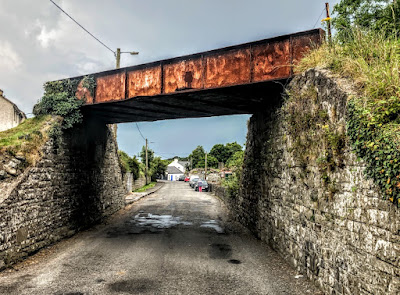 A rusting bridge in Ennistymon is a reminder of the West Clare Railway … and of Harry Comerford, the first station master (Photograph: Patrick Comerford, 2021)

This year’s summer ‘road trip’ has taken me to a number of Comerford houses in Co Galway and Co Clare, including Comerford Lodge, now known as Clare Cottage, in Spanish Point, Co Clare, Delamaine Lodge in Kinvara, Co Galway, and Ballykeel House in Kilfenora, Co Clare.

I have also known for many years of Comerford family connections with Ennistymon, Co Clare, so two of us decided to return to Ennistymon last weekend in search of a Comerford shop, and also found a Comerford link with the West Clare Railway, made famous in the Percy French ballad, ‘Are you right there, Michael?’

Ennistymon is less than 4 km east of Lahinch, and 26 km west of Ennis, and is on the edges of the Burren. Just as people in Lahinch resent road signs that spell the name ‘Lehinch,’ people in Ennistymon have difficulties with the official spelling ‘Ennistimon.’

The town is colourful and picturesque, with brightly painted, attractive shop fronts, plenty of coffee shops, and a variety of shops that include bookshops, music shops and good food shops.

The Cascades and the Falls made Ennistymon a tourist attraction (Photograph: Patrick Comerford)

Ennistymon grew from just three small houses in 1775 to 120 houses in 1810. Tourism developed in the 19th century with the attraction of the ‘Cascades’ on the River Cullenagh or Inagh, and the opening of the Falls Hotel on the site of the former Ennistymon House.

The West Clare Railway was built in the 1880s to connect Ennis and the coastal villages, towns and resorts of West Clare. A later extension reached Kilrush and Kilkee. It was narrow gauge line and was served by steam and later by diesel locomotives. It drew freight, cattle and passengers and carried the post on a 70-mile stretch for over seven decades.

The West Clare Railway was beloved by the people of Co Clare, who treated it like a local bus service. It is said the friendly engine drivers would even drop off passengers outside their door.

When building work began on the line, the first sod at Miltown Malbay was cut by Charles Stewart Parnell on 26 January 1885.

When Ennistymon railway station opened on 2 July 1887, it was yet another boost to the economy of the town and of West Clare. Postal services quickened, newspapers from Dublin became available on the day, Kilkee became known as the ‘Brighton of the West,’ and the Lahinch golf course was laid out. 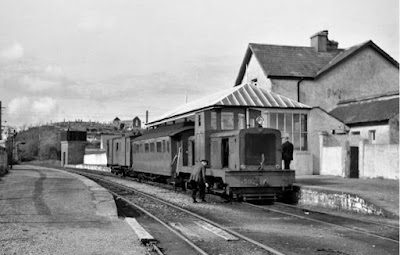 A train arriving at the old railway station in Ennistymon … the photograph was taken by a later station master, Roger Joanes

Percy French wrote the song after successfully suing the railway company for loss of earnings, when a late running train in 1896 prevented him from arriving on time for a performance in Kilkee. It is said the train was late because river water was being used to fill the water tank at Ennistymon, and the boiler filled with weeds.

The company, in turn, appealed the ruling, but French was over an hour late for the court hearing in Ennis. He told the judge he was late was because ‘I took the West Clare Railway here, your honour.’

The railway company was unsuccessful in its appeal.

For many of the early years of the line, Harry Comerford was the station master in Ennistymon, and his family remained in the Ennistymon for many generations. 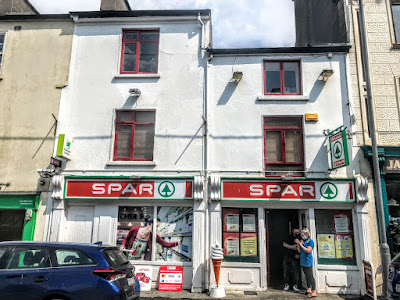 Harry Comerford was born Henry Comerford in Co Clare ca 1869, a son of George Comerford, a farmer, and the naming pattern in his family – including names such as Henry, George and Isaac – indicate this family was closely related to the Comerford families of Spanish Point, Doonbeg, Galway, Kinvara and Kilfenora, whose houses I have been visiting in recent weeks.

George Comerford, who was the best man at this wedding, may be George Comerford (ca 1852-1925), shopkeeper of Doonbeg, Co Clare, making him Harry’s eldest brother.

While Harry Comerford continued to work as the station master in Ennistymon, Harry and Margaret Comerford ran a thriving china shop and a bar and boarding house. Henry died in Ennistymon on 23 June 1930, aged 65; Margaret died on 8 June 1952, aged 82. They were the parents of eight children.

Meanwhile, the government decided in the early 1960s, to close many railway lines in the west of Ireland, arguing they were not profitable, without taking account of the public service they provided. The West Clare Railway closed on 31 January 1961, and its closure had an adverse effect on the economies of Ennistymon and the other market towns along the route. It was the last operating narrow gauge passenger system in Ireland.

Much of the line, its rails and sleepers were sold off. However, one engine was restored in 2009, and now runs on a short stretch of the line at Moyasta Junction near Kilrush. Part of the old West Clare railway bridge, including the parapets and steel beams, can still be seen in Ennistymon, south of the bridge at the Falls. The Station House B&B marks the site of the old station building. 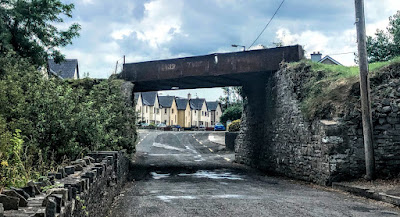 The parapets and the rusting beams of the former railway bridge in Ennistymon … a reminder of Harry Comerford and of Percy French (Photograph: Patrick Comerford, 2021) 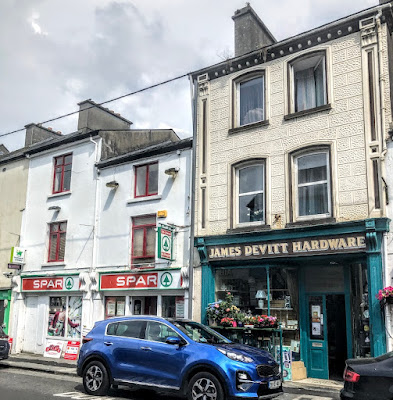 Ennistymon is named in a popular version of the song by Brendan O’Dowda, who added lyrics that may not have been part of the original: 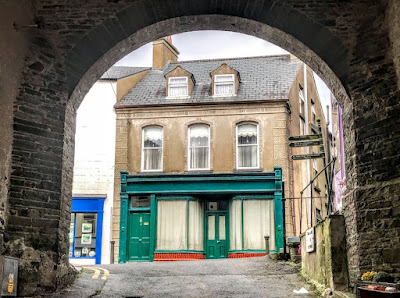 An excellent read, thank you.