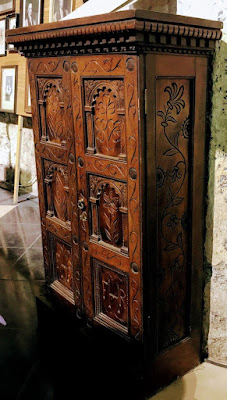 The Havergal Bookcase in Saint Mary’s Cathedral, Limerick … what mysteries are locked inside? (Photograph: Patrick Comerford, 2017)

There is a bookcase on the south side of Saint Mary’s Cathedral, Limerick, close to the reception desk, that looks more like a wardrobe straight out of Narnia movie. I have no idea whether this bookcase contains any books, or what it is used for. But it contains a reminder of a well-known hymn-writer and memories of a long-lost but curious building in the heart of Limerick.

A typed and well-thumbed notice beside the bookcase says it was presented by Maria VG Havergall (sic) in 1894 in memory of her sister, Francis Ridley Havergall (sic).

Maria Vernon Graham Havergal (1821-1887) and her sister Frances Ridley Havergal (1836-1879) were the daughters of Canon William Henry Havergal (1793-1870). Both William and Frances were well-known Victorian hymn-writers and composers, and several of their hymns are included in the Irish Church Hymnal.

Francis Havergal’s best-known hymn is ‘Take my life and let it be,’ which is No 597 in the Irish Church Hymnal.

An inscription on the right door of the bookcase refers to the Havergal Memorial Hall, a building that once stood on the corner of Glentworth Street and Baker Place in Limerick, between the former Limerick Protestant Orphan Society Hall and the former Trustee Savings Bank, close to the Tait Memorial Clock.

The Havergal Hall was later torn down and the Lyric Cinema was built on the site. The cinema in turn was razed and the site became a car park. Although there are still fading memories of the Havergal Hall, this once a prominent landmark building in Limerick.

Its story goes back to 1840, when a public meeting resolved to form the Limerick Philosophical and Literary Society, which would organise lectures and discussions and begin a public library and museum.

However, the society had problems finding suitable premises, and a meeting in May 1842 decided to raise funds for a new building.

The former Havergal Hall in the centre of Limerick

Frances Ridley Havergal, who gives her name to the bookcase in Saint Mary’s Cathedral, Limerick, was born on 14 December 1836, at Astley, near Bewdley, where her father, Canon William Henry Havergal (1793-1870), had been the rector. In 1842, he became Rector of Saint Nicholas’s Parish in Worcester, and a canon of Worcester Cathedral. In August 1850, she entered Mrs Teed’s school, where her teacher’s influence was life-lasting. In the following year, at the age of 14, she says, ‘I committed my soul to the Saviour, and earth and heaven seemed brighter from that moment.’

A short stay in Germany followed, and on her return to England she was confirmed in Worcester Cathedral on 17 July 1853. In 1860, she left Worcester when her father resigned as Rector of Saint Nicholas, and became Perpetual Curate (Vicar) of Saint Mary and Saint Luke, Shareshill, a small south Staffordshire village in the Diocese of Lichfield, five or six miles south-west of Cannock, seven or eight miles south of Penkridge and six miles north of Wolverhampton. Shareshill’s Church of England primary school is called Havergal. Her hymn ‘Take my life and let it be’ has been adopted as the village school’s special hymn.

Frances Havergal was a scholarly writer, with a knowledge of French, German, Italian, Latin, Greek and Hebrew. She devoted her life to hymn-writing, and while her poetry has limited qualities, much it survives because she speaks so simply and so directly of the love of God and the promise of salvation.

But she is direct too in expressing her narrow Calvinistic theological views. She had an intense dislike of Hymns Ancient and Modern, which she regarded as ‘the thin edge of Popery,’ she was strongly opposed to Roman Catholicism and she supported strident evangelical missions, including the Irish Church Missions.

Her sister, Maria Vernon Graham Havergal, was 15 when Frances was born. Maria was devoted to Frances, served and encouraged her while she lived, and after she died, Maria was the diligent editor and publisher of her completed works and part of her uncompleted works, gathering, codifying, preserving Frances’s written treasure for future generations.

Writing in her autobiography about a time when she visited Ireland and walked long distances in rural areas, Maria said: ‘It became an increasing delight to me to visit the cottages, my swift walking taking me to many a lonely corner. I marvel now at my activities, and believe they sprang from love to God, and much delightful communing did I hold with the Lord Jesus on the wayside. He was more and more to me, and when my early retirement at night was smiled at, they little knew the delight of being alone with Jesus my Lord.’

As a family, the Havergals regularly visited Limerick, which William described as ‘really a handsome and spirited place. Was pleased with the cathedral. As good shops in some streets as are to be seen in England.’ He left interesting descriptions in his diary of travelling by steamer from Limerick down the Shannon – ‘a fine river, truly, far beyond the Thames or Severn’ – to Kilrush, ‘which is the Margate of the Limerick people.’

But he found the hotel where he stayed in Kilrush was ‘miserable.’ I wonder whether the hotel room had a wardrobe as splendid as the Havergal bookcase in Saint Mary’s Cathedral?