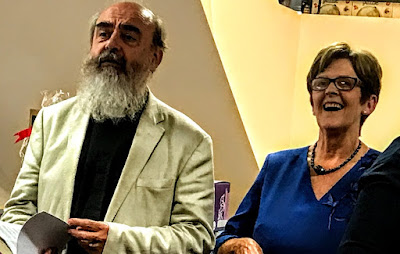 Canon Patrick Comerford and Patricia Byrne at the launch of Patricia Byrne’s new book, ‘The Preacher and the Prelate,’ in O’Mahony’s Bookshop, Limerick

Canon Patrick Comerford of the Rathkeale Group of Parishes was the guest speaker at the Limerick launch of a new book by the Limerick-based author Patricia Byrne, The Preacher and the Prelate: The Achill Mission Colony and the Battle for Souls in Famine Ireland.

Patricia Byrne’s new book, published by Merrion Press, tells the story of Canon Edward Nangle and the controversies stirred by his mission on Achill Island, Co Mayo, in the mid-19th century.

Speaking at the launch of her new book in O’Mahony’s Bookshop, O’Connell Street, Limerick, the author Patricia Byrne said: ‘Researching and writing this book took five years of my life. It was an obsession really for those five years. The story is raw, tempestuous, tragic and trauma-filled. It is the story of one man’s attempt to transform an island.’

Limerick poet and playwright Mary Coll launched the book, and Canon Patrick Comerford, who also spoke at the launch has published many papers on the Achill Mission.

The Preacher and the Prelate tells the story of an audacious fight for souls on famine-ravaged Achill Island in the 19th century. The flood of hostility between Edward Nangle and John MacHale, Roman Catholic Archbishop of Tuam, exposed the faultlines in religion, society and politics in Victorian Ireland.

Patricia Byrne is a Mayo-born writer who lives in Limerick, Ireland. She writes narrative nonfiction and personal essays and is a graduate of the NUI Galway writer programme. Her first novel, The Veiled Woman of Achill: Island Outrage and a Playboy Drama, was published in 2012. Her work has featured in New Hibernia Review, The Irish Times, on RTÉ’s ‘Sunday Miscellany,’ and many other publications.

This news report is published in the July 2018 edition of ‘Newslink,’ the Limerick and Killaloe diocesan magazine