The Hamsa Hand is used
widely, but what does it mean? 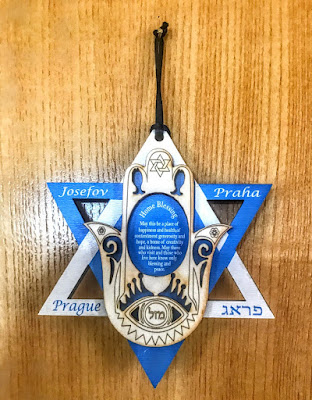 I posted some photographs last weekend of two ‘hamsa’ hands I had bought in the Josefov, the old Jewish Quarter in Prague. One is hanging on the door into the rectory kitchen in Askeaton and the other is handing by the breakfast table.

Both are curious images, and they raised a number of questions about whether this was the ‘Hand of God,’ the Hand of Miriam,’ the ‘Hand of Fatima’ or whether it was a universal symbol.

The larger Hamsa Hand points up contains a prayer I thought very appropriate as a prayer of welcome in the Rectory: ‘May this be a place of happiness and health, of contentment, generosity and hope, a home of creativity and kindness. May those who visit and those who live here know only blessing and peace.’

The prayer is attributed to Rabbi Yehuda ben Bezalel Lewa (Judah Loew ben Bezalel), known affectionately as the ‘Maharal,’ who for many years was the Chief Rabbi of Prague, and who died in 1609.

The Hebrew letters around it read Maharal and Prague.

The second, smaller Hamsa Hand points down and is decorated with an eye, some fish, and the Hebrew name Maharal.

Two or three years ago, I ate a number of times in Kraków in a kosher and Middle Eastern restaurant called Hamsa. There I was told the Hamsa is a popular talisman throughout the Middle East as a sign of protection and blessing. An introductory leaflet in the restaurant said the Hamsa hand ‘helps you make the right choices, find friends and in times of doubt gives us hope that everything will work out.’

The Hamsa Hand is used as a symbol throughout the Middle East, among Jews, Muslims and some Christians as a protective sign. The Hamsa Hand, particularly the open right hand, also represents blessings, power and strength. It is a common symbol in gold and silver jewellery in the Middle East and is also painted on the walls of houses or on the doorways of rooms.

The Hamsa Hand has a wide variety of names and variant spellings, including hamesh, hamsa, chamsa, and khamsa. Different Jewish traditions identify it as the ‘Hand of Miriam,’ the sister of Aaron and Moses, while many Muslims refer to it as the ‘Hand of Fatima.’

The Hamsa Hand has two main styles. One is shaped like a regular hand, the other has two symmetrical thumbs. The second style is the most popular, and the hamsa can be worn facing up or down.

It is difficult to pinpoint when the Hamsa Hand emerged in Jewish culture, although it is clearly a symbol Sephardic on nature. Jews might have used the hamsa to invoke the hand of God, or to counteract the Evil Eye with the eye embedded in the palm of the hand. It is often worn as a pendant on a necklace but also is found on key chains, house decorations, baby carriages, and other jewellery items.

Some hamsa hands contain images of fish, in accordance a saying in the Talmud by Rabbi Yose son of Hanina that the descendants of Joseph, who received Jacob’s blessing of multiplying like fish in Genesis 48: 16, are protected from the Evil Eye like fish. He explains: ‘the water covers the fish of the sea so the eye has no power over them’ (Berakhot 55b).

Other images that have found their way into the hamsa include the Star of David, prayers for the traveller, the Shema, the blessing over the house, and the colours red and blue. 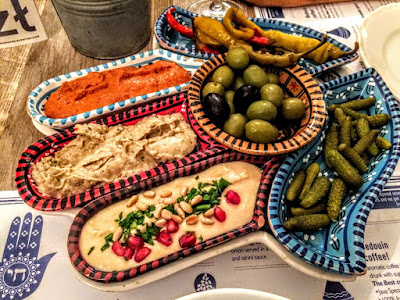 A Hamsa Hand used to serve food in the Hamsa restaurant in Kraków (Photograph: Patrick Comerford)

The meaning of the Hamsa Hand has a variety of interpretations, but the name hamsa seems to come from the five fingers of the hand. In Hebrew, the number five is hamesh and the fifth letter of the Hebrew alphabet, Hē (ה), is one of God’s holy names, an abbreviation for Hashem, which means ‘The Name’ and is a way of saying God without actually saying the name of God.

It can also represent the five books of the Torah or the five senses used to praise God.

The symbol of the hand appears in Kabbalistic manuscripts and amulets, doubling also as the Hebrew letter Shin (ש), the first letter of Shaddai, one of the names referring to God. In these variations of the hamsa, the index and middle fingers, and the ring and small finger, are joined, giving three upward strokes and the shape of the letter shin (ש). This calls on the all-sufficiency of Shaddai, ‘the Almighty,’ a name for God, to impart the blessing.

Some writers say the Hamsa has been present in Judaism since Biblical times, and cite Deuteronomy 5: 15, where it refers to the ‘strong hand’ of God who led the people out of Egypt.

Later, in late antiquity, the Byzantine period, and even in mediaeval Europe, including mediaeval Spain, the Hamsa Hand is seen in Jewish art as God’s hand reaching down from heaven.

In the Middle Ages, the Hamsa Hand became particularly with the medical arts, and was displayed by Maimonides as a token of the healings he sought to obtain from God and the orderly Creation. It has also been traditionally combined with the eye symbol, but this does not add any potency to either symbol used separately. 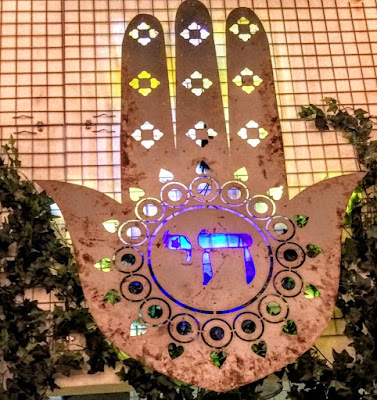 A Hamsa Hand in the Hamsa restaurant in Kraków (Photograph: Patrick Comerford)

One of the most prominent early appearances of the Hamsa Hand is the image of a large open hand that appears on the Puerta Judiciaria (Gate of Judgment) of the Alhambra in southern Spain.

Some historians, including Shalom Sabar, argue that after the Jewish expulsion from Spain in 1492, exiled Jews used the hamsa as a sign of protection and ‘as a distinctive sign of the priesthood, especially when they wished to show that a person was of priestly descent ...’

The use of the hamsa in Jewish culture has been intermittent. It was often used by Sephardic Jews in the late 19th and early 20th centuries, but it was used less and less over time into the mid-20th century. 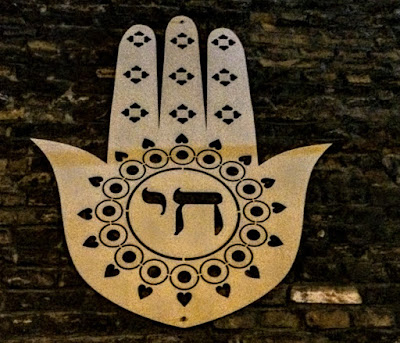 Among Jewish people, the hamsa has become a respected, holy and common symbol. It is used in the Ketubah, or marriage contracts, as well as items that dress the Torah such as pointers, and the Passover Haggadah.

In the Jewish kabbalah, the hamsa is the symbol of an extended hand and literally means ‘fivefold,’ from chamesh, five.

It is usually depicted in an artificially stylised form, with the thumb and the small finger at identical lengths and the hand in a symmetrical shape rather than a left or right or right.

The first meaning is extending one’s hand towards another in a gesture of peace, blessing and fellowship. From this meaning is derived its symbolism for communal prayer, one for another, and particularly the two prayers of initiation and restoration.

From these meanings are derived its use as a symbol of welcome and of healing, including physical healing.

It is said, therefore, that anyone who display the Hamsa Hand has a responsibility to pray continually for those who may view it.

However, the power of the universal gesture is that the universal energy field, which works through order rather than force, is most easily transmitted through the hands. From this fact is derived the principle that smikhah (the ‘laying on of hands’) can physically confer benefits. It takes from what belongs to the giver, including status, authority, and leadership among others, health, vitality, and peace within oneself, and gives it to the receiver.

Christians in the Levant know the hand it as the Hand of Mary.

In Islam, the hamsa represents the Hand of Fatima, the daughter of Muhammad. Among Sunni Muslims, it is associated with the Five Pillars of Islam, while among Shia Muslims it symbolises the ‘Five People of the Cloak’.

Some interpretations say the hands are depicted with the fingers spread apart to ward off evil, or closed together to bring good luck, that fingers point up to ward off evil and down to bestow blessings.

Depictions of the hand, the eye or the number five in Arab traditions are related to warding off the evil eye, and in many places, including Greece, it is rude and aggressive to raise one’s right hand with the palm showing and the fingers slightly apart. 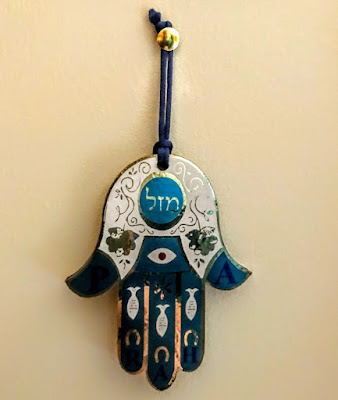