The sun sets on another
holiday in Greece 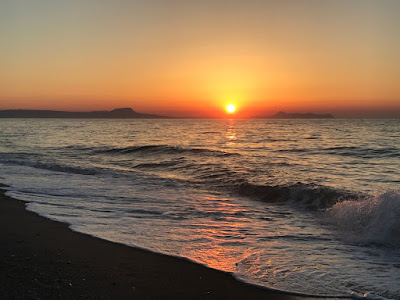 Sunset on the beach at Platanias in Rethymnon last night (Photograph: Patrick Comerford, 2017)

The sun has set on another holiday in Greece.

It is late on Wednesday evening [12 July 2017], and I am at the airport in Chania, where I arrived two weeks ago, waiting to board a late-night flight to Dublin.

This has been the sixth consecutive year I have stayed in Rethymnon, and this is the third year in a row that I have stayed in Platanias, just 4.5 km east of Rethymnon on the long sandy beach that stretches for miles along on the coast.

Because of the high tides churned up by the full moon, it has not been possible to swim in the sea some days. But there have been walks by the sea each day, mainly in Platanias, but also at the harbours in Rehtymnon and Iraklion, in Panormos and Georgioupoli, and there have been days by the pool too.

There have been visits to small vineyards and vast expanses of olive groups, trips into the mountains and along the Mediterranean coast with its bays, beaches and sandy coves, visits to the monastery in Arkadi, visits to friends in Piskopiano in the hills above Hersonissos, a stop-over in neighbouring Koutoulafari, and a journey to the waterfalls at Argyroupolis and the lake at Kournas.

Platanias is only a 10-minute, €8 taxi trip into the centre of Rethhymnon, and there have days strolling around the back streets and narrow alley ways, browsing in the book shops, visiting the studios of artists and icon writers and seeping in the architectural and archaeological legacy of this Venetian city.

As well as going to church in Platanias and Tsemes on Sunday mornings, I have visited cathedrals, churches, chapels and monasteries in Rethymnon, Iralklion, Piskopiano, Koutouloufari, Arkadi, Argyroupolis and Panormos and the tiny chapel of Aghios Nikoloas on a rocky islet off the coast at Georgioupoli, reached on foot along a long and narrow spit of an artificial causeway that is constantly washed over by the waves.

Perhaps the three cultural highlights of these two weeks have been my visits to the Museum of Christian Art, housed in the former church of Saint Catherine of Sinai in Iraklion, the new museum in the monastery of Arkadi, and the workshop of the iconographer Alexandra Kaouki, beneath the slops of the Fortezza in Rethymnon.

On most mornings, I have enjoyed breakfast on the terrace overlooking the gardens at Julia Apartments where I have been staying in Platanias. There was fresh bread from the bakers’ shop on the ground floor, and fresh fruit and orange juice from the supermarket a few doors away. But because of a late winter, there were no fresh figs for breakfast this year.

Although the temperatures have been in the high 30s in Crete for the past few weeks, the trees and the flowers are still in full bloom, so that the afternoon walks to and from the beach have been through beautiful arrays of hibiscus, bougainvillea and riots of purple, pink, white, yellow and red that paint a colourful scene against the bright blue of the sky and the sea.

My walking averages each day have been over 5 km, and with the healthy food I have been eating in the local restaurants each evening, it feels as though this has been a good holiday for my health. Once again, the warm hospitality and genuine welcome from Greeks has been overwhelming.

This afternoon, a chance encounter on the street with a former student and priest-colleague from the Church of Ireland led to five of us having a lengthy afternoon lunch in a shaded corner in Platanias before a final walk on the beach.

It is back to work tomorrow, refreshed spiritually, mentally and physically. The journey from Dublin to Askeaton tomorrow may take as long as the flight from Crete to Dublin tonight, and at times this week the day-time temperatures in Ireland have been half those in Crete. There is a diocesan meeting in Limerick later on Thursday, and I need to finalise my preparations and sermons for Sunday’s services.

Next week, I am back in England for three days for the annual residential conference of the Anglican mission agency, USPG. The conference was in Swanwick, Derbyshire, last year, but returns to High Leigh in Hoddesdon, Hertfordshire, this year. I am chairing one of the sessions on Wednesday morning, and hope to visit Cambridge too before I catch a late-night flight back on Wednesday.

I have known Rethymnon since the 1980s, I have stayed here perhaps a dozen times, and I have been to Greece almost 40 times. But I shall be back in Greece sooner than expected. A surprise present means two of us are going to visit Athens for two or three days next month [August 2017].

A colourful corner of Platanias in Rethymnon, walking back from the beach this week (Photograph: Patrick Comerford, 2017)