Limerick’s ‘Anti-War Memorial’
shows the victor and the victim 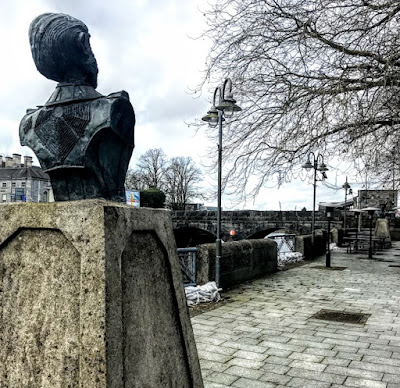 I was writing yesterday about the Revd Bolton Charles Waller, whose family roots were in Castletown Parish, Co Limerick, and his pioneering work in promoting world peace and campaigning against international war.

But Limerick also has its own unique ‘Anti-War Memorial’ in the shape of a two-piece sculpture on George’s Quay, opposite the Locke Bar and close to Barrington’s Hospital.

This two-piece sculpture, representing the two sides of war, was created by Vincent Browne in 1987. His sculpture consists of two busts, one of a tyrannical, powerful general, who appears tall and strong, the other of an unknown injured soldier who is presented as a victim of war.

These sculptures stand on 10-ft plinths facing one another on George’s Quay. The work was a public commission with the hope that it would promote public sculpture in Limerick.

Vincent Browne is one of the leading sculptors in Ireland. He was born in Dublin in 1947 and studied at the National College of Art and Design (NCAD) and the Jan van Eyck Academy in the Netherlands.

His other works include ‘Mr Screen,’ a statue outside the Screen Cinema in Dublin, and the bronze Palm Tree seat in Temple Bar, Dublin.

Four other pieces were created at the same time by artists Tom Fitzgerald, Eileen McDonagh, Jim Flavin and Tracy McKenna. Their pieces are located at the Potato Market and at the Hunt Museum .These sculptures were created as part of the Cultural Agreement between the Arts Council and Limerick Corporation, the first partnership between the Arts Council and a local council. The pompous general is decorated with a dozen ribbons and medals (Photograph: Patrick Comerford, 2018)

Vincent Browne’s ‘Anti-War Memorial’ is consists of two separate busts made of welded copper and brass that stand on 10 ft high plinths.

The first bust portrays a general, who shows no wounds and no signs of being involved on the frontline in war. Yet he is decorated with least a dozen ribbon and medals, although each medal is embossed with the skulls of those he has sent to death, and two missiles serve as epaulettes on his uniform.

He looks pompous, unscathed and appears to wield a of tyrannical power over the hapless soldier who faces him. He is meant to scare and revolt us. 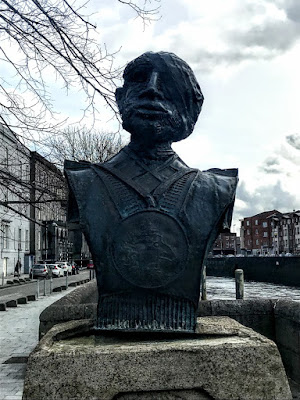 The second bust depicts this ‘unknown soldier’. He is a victim of the war, wounded and suffering with bandages wrapped around the left side of his face. Ironically, he also has an over-large, ostentatious medal hanging from his neck.

Is this the only reward, recognition and compensation he has received for his battle wounds?

But there is some humour in the fact that the pompous general has also been cut down to size in the way his image is used at ground level on advertising board inviting people into breakfast in the Locke Bar. 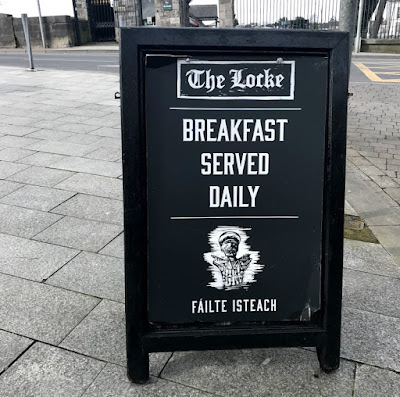 The general has been ‘cut down to size’ outside the Locke Bar (Photograph: Patrick Comerford, 2018)