Two poets who speak to
the heart of Rethymnon 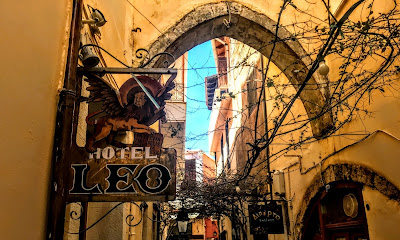 In the side streets of Rethymnon on a sunny morning this week (Photograph: Patrick Comerford, 2019)

Following Monday’s beautiful evening in Rethymnon, I spent another few years in the narrow streets of the town again yesterday [30 April 2019].

As well as a centre of tourism, Rethymnon is also a university town and a cultural town, with bookshops, live music, theatre, libraries, writers, artists’ studios, cinema and concerts.

Rethymnon is also known as the home of two great modern Greek poets: Archbishop Stylianos Harkianakis (1935-2019), who died in Australia a month ago, and the poet and writer Manolis Xexakis, who is about three or four years older than me.

Archbishop Stylianos Harkianakis (Στυλιανός Χαρκιανάκης), who is spoken of with affection here in Platanias, was the Greek Orthodox Archbishop of Australia, and a monk of Vlatadon Monastery, which I visited when I was spending Orthodox Easter in Thessaloniki last year. He was the first chair of the Standing Conference of the Canonical Orthodox Churches in Australia, Dean of Saint Andrew’s Greek Orthodox Theological College, and a theologian specialising in ecclesiology as well as an award-winning poet.

Stylianos Harkianakis was born in Rethymnon on 29 December 1935. He studied theology at the Theological School on the island of Halki, and was ordained deacon in 1957 and priest in 1958. He did his postgraduate studies in systematic theology and the philosophy of religion at the University of Bonn (1958-1966), where his lecturers included Joseph Ratzinger, later Pope Benedict XVI. He thesis examined the theory that the Orthodox Church possessed infallibility when it acted together in conciliarity or at the Ecumenical Councils.

While completing his postgraduate studies, he was appointed Professor of Theology at the University of Athens in 1965. In 1966, he was appointed the Abbot of Vlatodon, where he was a founding member and later president, of the Patriarchal Institute of Patristic Studies. He also lectured in systematic theology at the University of Thessaloniki (1969-1975).

He became the Titular Metropolitan of Militoupolis in 1970, while remaining at Vlatadon, and was responsible for church matters in Northern Greece and Mount Athos.

He became the Archbishop of Australia in 1975, and became involved with inter-church dialogue, especially with the Anglican and Roman Catholic Churches. He died in Sydney after a lengthy illness on 25 March 2019.

A noted poet, he was awarded the Gottfried von Herder International Award in 1973, and the Award for Poetry from the Academy of Athens in 1980. One of his poems, After Ephialtes, was set to music by the Greek-Australian singer-songwriter Costas Tsicaderis (1945-2004).

Rethymnon is a city of tradition, the arts and poetry (Photograph: Patrick Comerford, 2019)

The poet and writer Manolis Xexakis (Μανόλης Ξεξάκης) was born in Rethymnon in 1948, and studied at the University of Thessaloniki.

In the early 19080s, Xexakis also attended a course on the poetry of Solomos at the University of Thessaloniki taught by George Savidis of Harvard who worked with Edmund Keeley on translating the poems of CP Cavafy. He has worked as a journalist and as a teacher.

His work has been translated from Greek and introduced to English readers by the writer John Taylor.

The 12 interconnected prose poems of Captain Super Priovolos are simultaneously set in three crucial periods of Greek history: the War of Independence (from 1821), the Civil War (1945-1949), and the years of the Junta (1967-1974), during which Xexakis wrote the sequence, specifically between 1970 and 1974.

His work weaves together two main themes: the hubris of political leadership and the people’s relationship with political power. He juxtaposes the Civil War that followed World War II, the uprising against Turkish rule and the colonels’ dictatorship.

His characters include Captain Priovolos, a Communist guerrilla leader in the Civil War, and Aris Velouhiotis, the legendary Resistance hero ‘Captain Aris,’ one of the original leaders of the National Popular Liberation Army (ELAS) in the Greek Civil War who was expelled from the Greek Communist Party (KKE) for ‘adventurism’ before killing himself two days.

In some of his poems, Xexakis evokes the Cretan-born leader, Eleftherios Venizelos (1864-1936), who was prime minister several times, and Panayiotis Kanellopoulos (1902-1986), the last constitutional prime minister before the colonels’ coup in 1967. He has also been inspired by the death of Grigorios Lambrakis in the protests in Thessaloniki in 1963 that inspired the Costas Garvas movie Z.

In one poem, he uses the phrase ‘And he who thinks of resurrection candles lit in the cellar is the same one whose cleverness once struck an entire army,’ which recalls Kanellopoulos, who had been Professor of Sociology at the University of Athens.

Kanellopoulos maintained a critical stance against the colonels throughout the years of the junta, but is also remembered for his declaration at the end of World War II: ‘Makronisos is the new Parthenon.’ He was referring to the island on which left-wing guerrilla fighters had been imprisoned and tortured: ‘As if the island were the font,’ adds Xexakis, ‘in which all Greek should be rebaptised!’ 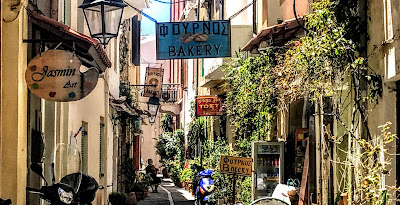 In a colourful sidestreet in Rethymnon this week (Photograph: Patrick Comerford, 2019)