Reminders of the Holocaust
in memorials in Corfu 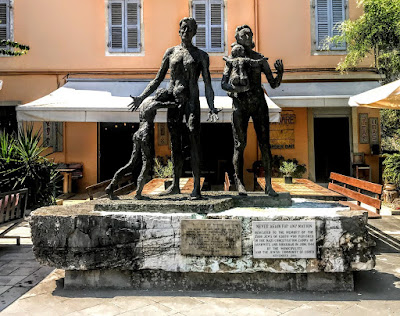 The Holocaust Memorial by Georgios Karahalios (2001) remembers the 2,000 Jews of Corfu who were murdered in Auschwitz in 1944 (Photograph: Patrick Comerford, 2019)

Patrick Comerford The Nuova or New Synagogue at 4 Velissariou Street, which I spent time visiting yesterday [Friday 23 August 2019], was one of three synagogues in Corfu before World War II, but the only one to have survived the Holocuast.

A moving memorial in the Synagogue to the 2,000 Jews from Corfu who perished in Auschwtiz and Birkenau during the Holocaust lists only about six dozen or so family names. To list all the victims would have been an overwhelming task.

But two other memorials in the old town are reminders of the sweeping and haunting consequences of the Holocaust for life in Corfu in the mid-20th century.

The 2001 Holocaust Memorial, with its harrowing bronze statues by Georgios Karahalios, is about three minutes’ walk from the synagogue.

This memorial stands between the bars in Plateia Neou Frouriou (New Fortress Square), Off Solomou Street, just in front of the wall of the New Fortress. This bronze Holocaust memorial is a stark sculpture by Georgios Karahalios on a stone base.

The sculpture shows a naked woman who cradles an infant while a naked man seems helpless in protecting a boy who hides his face in the man’s thigh. 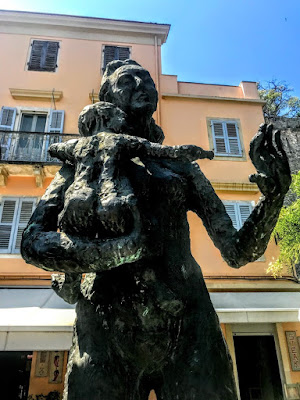 A naked man seems helpless in protecting a boy who hides his face in the man’s thigh (Photograph: Patrick Comerford, 2019)

The Holocaust memorial was erected in 2001 by the city of Corfu and the Jewish community and was dedicated on 25 November 2001.

A plaque at the base memorial reads:

Never again for any nation 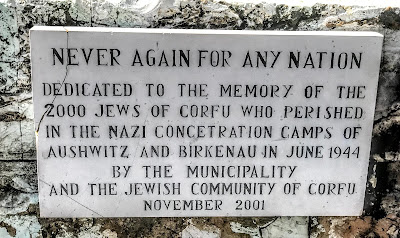 The inscription on the Holocaust memorial in Corfu (Photograph: Patrick Comerford, 2019)

The second monument is outside the Church of Aghios Spyridon, the patron saint of the island. Here a bust commemorates the late Bishop Methodius Kontostanos, who was Metropolitan of Corfu and Paxos from 1942 to 1972.

Bishop Methodios regularly attended all the High Holyday services at the Greek synagogue in Corfu and was a faithful witness against antisemitism during and after the Holocaust.

In his consistent witness, Bishop Methodios was a worth successor to the first Bishop of Corfu, Saint Arsenios, who died in 800, or perhaps in 959, and who is one of the principal patron saints of Corfu along with Saint Spyridon. He was born in Constantinople to the Jewish parents. After becoming a Christian, he became the first bishop of Corfu. 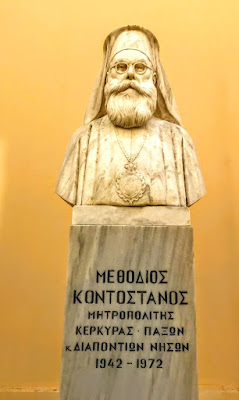 Outside the Church of Aghios Spyridon, a bust commemorates Bishop Methodios, who attended all holiday services at the Greek synagogue (Photograph: Patrick Comerford, 2019)