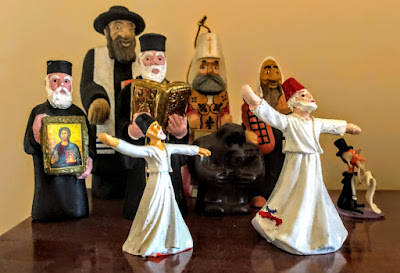 Two Mevlevi dervishes have joined priests, bishops and rabbis in an interfaith chorus on a bookshelf in the Rectory in Askeaton (Photograph: Patrick Comerford, 2020)

These ‘whirling dervishes’ have joined an array of multifaith religious figures of varying sizes on the bookshelf that now include a Russian Orthodox bishop, two Greek Orthodox priests – one with a Bible, the other with an icon, a pious Jew from Kraków, a rabbi carrying Torah scrolls, and a mohel from Murano, whose scalpel, in some unseemly manner, slipped off while he was being brought back from Venice.

In among them too is a Golem figure from Prague, who has not yet managed to find his way up into the rectory attic.

An accompanying present from Istanbul is a cushion cover based on a painting by Osman Hamdi, The Turtle Trainer (Kaplumbağa Terbiyecisi), painted in 1906. There has a copy of this painting in the house in Knocklyon, Dublin, for many years.

This painting was originally called The tortoises and the man (‘Kaplumbağalar ve Adam’), but became known popularly as The Tortoise Trainer.

The trainer is supervising three turtles eating leaves with their heads bowed, while two other turtles behind him are trying to approach to the leaves. This picture can be interpreted as a merciless, hopeless satire on his colleagues at work. The light coming from the only, low window, which is at floor level in the room, co-ordinates all the other elements in the picture, from which all unnecessary details have been eliminated.

Osman Hamdi’s original painting sold for $3.5 million in 2004. It was acquired by the Suna and İnan Kıraç Foundation and is on display at the Pera Museum in İstanbul. 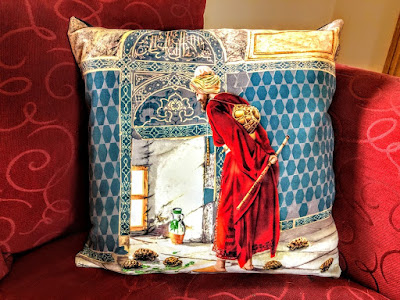 The two Mevlevi dervishes and the cushion cover were brought as presents from Istanbul in mid-March, and are reminders of earlier visits to Mevlevi tekkes in Konya in Turkey and Nicosia in Cyprus, and reminders too of an evening at a ‘Whirling Dervish’ performance in Uçhisar in Cappadocia five years ago and a similar performance during a working visit to Istanbul in 1992.

The Mevlevi Order or ‘Whirling Dervishes’ traces its origins to Jalāl ad-Dīn Muhammad Rūmī (1207-1273), also known as Mevlânâ, Mevlevî (‘my master’), and more popularly as Rūmī. He was a Persian poet, jurist, theologian and Sufi mystic.

Rumi’s influence transcends national, ethnic and even religious divisions. He wrote mainly in Persian, but also wrote verse in Greek, Arabic, and Turkish. His Mathnawī, written in Konya, is the greatest classical work of Persian literature.

His poetry has been translated into many languages and he is said to be the most popular, best-selling poet in the US. Dr Leonard Lewisohn, editor of the Cambridge-published journal, Mawlana Rumi Review, compares his place in Persian and Middle Eastern literature with Dante in Italian and Shakespeare and Milton in English.

Rumi wrote his best-known work, his Masnavi, in Konya, with the opening lines:

Listen to the reed and the tale it tells,
How it sings of separation …

Rumi spent the next 12 years dictating the six volumes of his masterpiece. By the end, he also wrote about belief in a ‘religion of love’ that crosses over traditional denominational boundaries. In the Masnavi, he wrote, ‘The religion of love is beyond all faiths, The only religion for lovers is God.’

When he died in Konya on 17 December 1273, he was buried beside his father. At his funeral, there were singers, musicians, dancers, Quran reciters, and imams. But there were also Jewish rabbis reciting psalms, and Christian priests reading from the Gospels at his funeral – which left some of his Muslim followers bewildered, but probably makes the ‘dervishes’ more at home with the other figures on the rectory bookshelf.

The Yeşil Türbe or ‘Green Tomb’ was erected over his grave. The mausoleum was designed by the architect Behrettin Tebrizli and was finished in 1274. Rumi’s epitaph reads: ‘When we are dead, seek not our tomb in the earth, but find it in the hearts of men.’

Following Rumi’s death, his son Sultan Walad and his followers founded the Mevlevi Order, also known as the Whirling Dervishes, famous for their Sufi dance known as the sema ceremony. The mausoleum of Rumi is now the Mevlâna Museum and is one of the great centres of pilgrimage in the Islamic world. 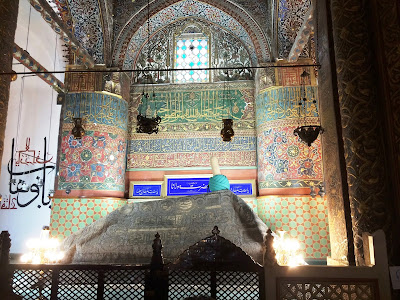 The tomb of Rumi is covered with brocade embroidered in gold with verses from the Quran (Photograph: Patrick Comerford)

In the Mevlevi ritual, the sema represents a mystical journey of spiritual ascent through mind and love to the Perfect One. In this journey, the seeker symbolically turns towards the truth, grows through love, abandons the ego, finds the truth and arrives at the Perfect. The seeker then returns from this spiritual journey, with greater maturity, to love and to be of service to the whole of creation without discrimination based on belief, ethnicity, class or and nationality.

Rumi’s teachings emphasise tolerance, positive reasoning, goodness, charity and awareness through love. He believed all religions are seeking truth. His essential teaching focusses on the reunion of the soul with the Beloved or the Creator, from whom the soul has been cut off. It is said the sound of the reed and the ney represent the plaintive longing of the soul for reunion with the Friend, the Creator.

Some sayings of Rumi include:

One of his poems that I love best is ‘The Mouse and the Frog’:

A mouse and a frog met every morning
on the riverbank.
They sit in a nook of the ground and talk.
Each morning, the second they see each other,
they open easily, telling stories and dreams and secrets,
empty of any fear or suspicious holding-back.
To watch and listen to those two
is to understand how, as it’s written,
sometimes when two beings come together,
Christ becomes visible.

In another poem, he writes:

A soul not clothed with Love
brings shame on its existence.
Be drunk on Love,
for Love is all that exists.
They ask, ‘What is Love?’
Say, ‘Renouncing your will.’
He who has not renounced will
has no will at all.
The lover is a mighty king,
standing above the two worlds.
A king does not look
at what is beneath him.
Only Love and lovers
have eternal life.
Set your hearts on this alone;
the rest is merely borrowed.