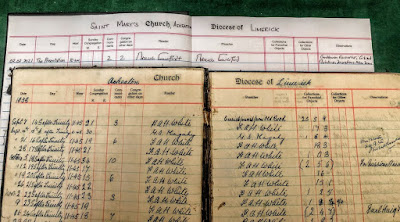 Opening a new preacher’s book and closing an old one in Saint Mary’s Church, Askeaton, this morning (Photograph: Patrick Comerford, 2021)

Candlemas, or the Feast of the Presentation, brought an end to the 40-day season of Christmas and Epiphany-tide today. From tonight, we move into Ordinary Time, but just for two weeks, as Lent begins in a fortnight’s time on Ash Wednesday, 17 February.

The candles on the Advent Wreath in Saint Mary’s Church, Askeaton, were lit for the last time this morning for the celebration of the Candlemas Eucharist.

Afterwards, two of us removed the Advent Wreath and candles, the Christmas Crib, the flower arrangements, and the holly, the ivy and the poinsettias decorating the pulpit and the windows, and packed away the crib for the next ten months – although the community Christmas Crib outside the church gates was still in place in Church Street this afternoon, complete with the visiting Magi.

Despite the lockdown, and the uncertainty about when the churches may open once again – whether this may be during Lent or in time for Easter celebrations – I still must plan to mark Holy Week and Easter.

Already, those plans include a series of five online Lenten studies led by members of the cathedral chapters of Limerick and Killaloe. To paraphrase or recycle a now-jaded saying, church buildings may be closed for Lent, but the Church is not.

One of the last things to do this morning was to open a new preachers’ book in the Vestry in Askeaton. I had made the last entry on Sunday in an old and fading book that is beginning to fall apart.

It was good to start a new preachers’ book with the first entry by marking the end of the season of Christmas and Epiphany-tide today. But it was also curious to look back on the entries in the book I had been using since I arrived in Askeaton four years ago.

The first entries in that book began in 1958, with entries by Canon Frederick Alexander Howard White (1885-1965), who had been the Rector of Askeaton, Shanagolden and Loughill for 30 years, since 1928, and stayed on in the parish for another five years, until 1963, when he retired at the age of 78. He died two years later, in 1965, shortly before his 80th birthday.

It was interesting to look at his entries in the book this morning. There were Sunday services every week, alternating between Morning Prayer and Matins with Holy Communion. Attendances were only marginally higher than they have been in pre-pandemic days, but it is surprising how few people remained behind for Holy Communion after what we knew well into the 1970s or later as ‘Mangled Matins.’

In the first few weeks of that old book, holiday cover seems to have been provided by the Revd (later Canon) Gerald Samuel Magahy (1923-2008), then the Headmaster of Villiers School and Diocesan Curate in Limerick. He later became Chaplain and Headmaster of the King’s Hospital, overseeing the school’s move from Blackhall Place in inner-city Dublin to Palemrstown in 1971. He was also successively Treasurer, Chancellor and Precentor of Saint Patrick’s Cathedral.

Canon White was also one that interesting generation of Church of Ireland clergy who emerged from Rathmines School, a cradle for many for many priests, missionaries and bishops who were at the cutting edge of thinking in the post-disestablishment Church of Ireland, and run by the Revd Charles William Benson (1836-1919) for 40 years from 1859 to 1899.

He was also one of my predecessors as the Precentor of Limerick Cathedral, holding office 12 years from 1951 to 1963. Some people in the parish still remember him. 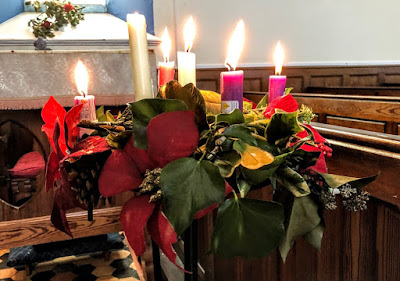 The last lighting of the candles on the Advent Wreath, celebrating Candlemas in Saint Mary’s Church, Askeaton (Photograph: Patrick Comerford, 2021)