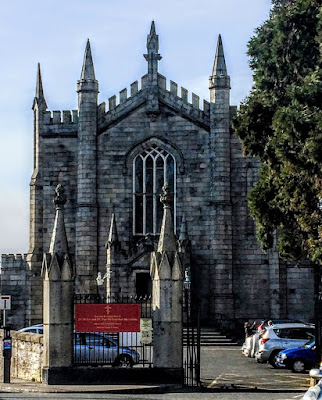 Harold’s Cross Church … built as a trustee church in the Church of Ireland in in 1836-1838 (Photograph: Patrick Comerford)

I was at a family funeral in Mount Jerome last week. As I looked across the Victorian monuments and graves in the Dublin equivalent of Pere Lachaise in Paris or Highgate Cemetery in London, I could pick out the window of my bedroom at the back of the house in Harold’s Cross where my parents lived in the 1960s.

From that window, the highest point I could see was the classical-style monument to Mrs Maria Martha Magee, the widow whose bequest was commemorated in the name of Magee College, Derry, and the former house known as Mount Jerome, one of the many country houses that added to the attractions of Harold’s Cross in the 18th and 19th centuries.

Peering through the gravestones and the classical monuments, I would also see the Russian Orthodox Parish Church of Saint Peter and Saint Paul. But during those years of my later childhood in the 1960s, I know this church well as Harold’s Cross Church of Ireland parish church.

At the time, there were three churches in Harold’s Cross: the Church of Ireland parish church, Holy Rosary Roman Catholic Church; and the Passionist church at Mount Argus. In addition, there were chapels in the three convents and at the Hospice and a funeral chapel in Mount Jerome Cemetery. So, it is interesting that Harold’s Cross only began to develop as a separate parish in the two main traditions in the 19th century.

Harold’s Cross itself probably dates from the 10th century, and legend says a village sprang up on the site of a battlefield, the village of Harold’s Cross.

Harold’s Cross probably takes its name from a cross erected to mark the boundary of the lands of the Archbishop of Dublin and the Harold family of Rathfarnham, who also give their name to Harold’s Grange. The cross of Harold’s Cross stood near the major crossroads or junction at Harold’s Cross Road leading to Rathgar, Rathmines and Kenilworth, on the road to Terenure and Rathfarnham.

Harold’s Cross was raided in 1594 and burnt by Walter Reagh Fitzgerald. Adam Loftus (1533-1605), Archbishop of Dublin, who lived at Rathfarnham Castle, owned land in the Mount Jerome area of Harold’s Cross. Robert Emmet found a hiding place in Harold’s Cross in 1798.

Later, large houses were built around the green, mostly with the name ‘Mount’, reflecting the area’s high position above the city. They included Mount Argos, later Mount Argus, Mount Jerome, Greenmount House, Mount Harold, Mount Drummond and Mount Tallant. The remainder of the village lands were farmed with two orchards, one called Madgin’s Farm, where the Casimir Road and Casimir Avenue were built, and Buckley’s Farm, later the site of the Poor Clares’ Convent and Mount Drummond.

By the 19th century, many people had moved out to Harold’s Cross for the cleaner atmosphere on the higher ground above the city, staying in lodgings or building their own houses. The course of the River Poddle encouraged milling and there were eight mills in Harold’s Cross in 1801, including paper, flour, corn and wire mills.

Shaw later leased Mount Jerome to John Keogh (1740-1817), a prominent campaigner for Roman Catholic voting rights. His house at Mount Jerome was often visited by leading members of the United Irishmen. He was buried at Saint Kevin’s Church, Camden Row. 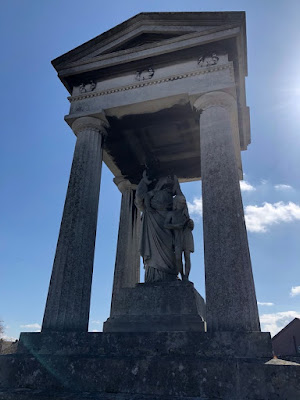 Shaw was a major shareholder in the company that opened Mount Jerome Cemetery in 1836. At first, it was planned as a cemetery for Dublin Protestants in response to the popularity of Glasnevin Cemetery, which opened in 1832.

Later, bodies from the churchyards at Saint Peter’s Church, Augier Street, and Saint Bride’s Church were reburied in Mount Jerome. A small, enclosed section near the entrance but outside the cemetery walls was reserved for Muslims.

The cemetery once operated by a private company now belongs to the Massey family business. The original house partially remains, although its upper floors have been removed, and it serves as the cemetery office. 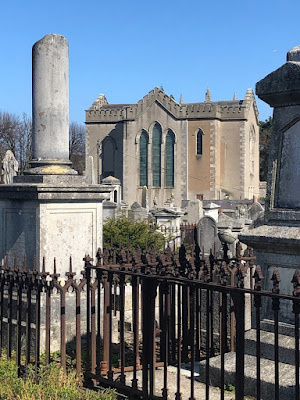 The former Church of Ireland parish church in Harold’s Cross overlooks the course of the River Poddle, with Mount Jerome Cemetery to the rear. Harold’s Cross Episcopal Church was built in 1836-1838 as a Trustee Church within Saint Catherine’s Parish.

The church was enlarged by the Louch practice in 1853, with galleries on three sides, and had a seating capacity of 1,100. The internal features included a ribbed ceiling, and the arrangement of the pews meant the church had no central aisle.

John Howard Louch was the second son of Richard Lucius Louch and his wife Martha Collins. He was articled to William Farrell in 1813, and later joined the civil branch of the Royal Engineers’ department. While he was stationed at Clonmel and Cahir, Co Tipperary, he married Sarah Elizabeth, daughter of Maurice Fitzgibbon of Castle Grace, Co Tipperary, and their son Fitzgibbon Louch was born at Castle Grace in 1826.

When Louch set up a private practice in Dublin, and his earliest known designs are for Howth Castle (1828). By 1849 he had taken Fitzgibbon Louch into his office at 78 Harcourt Street. Both John Howard Louch and Fitzgibbon Louch joined the RIAI in 1853, when JH Louch was elected a fellow (FRIAI).

Fitzgibbon Louch left Dublin for Derry in 1857, while John Louch gave up the office he had shared with his son at 78 Harcourt Street and his house at Garville Avenue, Rathgar, and moved to 15 Molesworth Street. He was chosen in 1859 as architect for a proposed Grand Parade, running from Dame Street to the Kingsbridge railway terminus.

Louch died at 69 on 20 August 1867 at 15 Molesworth Street, and was buried at Mount Jerome on 22 August. Two of his sons, William Louch and Thomas Kingston Louch, continued their father’s business until William was declared insolvent in 1871.

Other works by Louch include plans for the Bank of Ireland (1832) on Custom House Quay, Wexford; plans for Saint Patrick’s Church, Dalkey (1837); additions to Saint Matthias Church, Wellington Square, Dublin (1850-1852) and the Mariners’ Church, Dun Laoghaire; the Widows’ Almshouse on Grantham Street, Dublin (1858); and works at Emo Court for Lord Portarlington.

The deed establishing the trust for Harold’s Cross was signed on 23 April 1841, and the first chaplain, the Revd Robert James McGhee (1789-1872), was licensed on 10 October 1841. He was a close associate of Canon Mortimer (‘Souper’) O’Sullivan and a vocal and polemical evangelical, who published a number of strongly anti-Catholic pamphlets and lectures before moving to England in 1846. 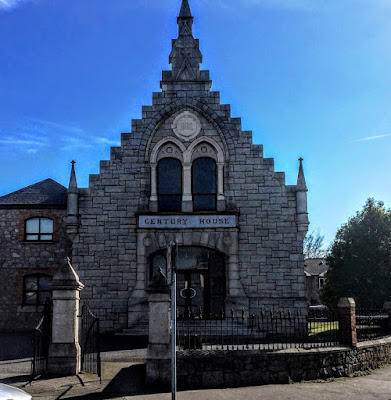 During Askin’s time as chaplain, a rectory was built at 13 Leinster Road West, near Kenilworth Square. It was designed by the architect Joseph Maguire (1820-1904) in 1871-1872 and is now known as Marleigh House. 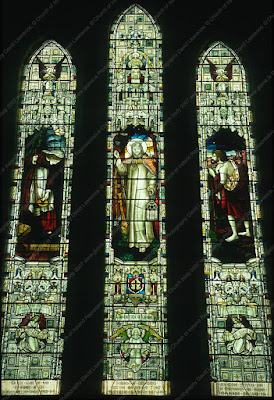 Many of the windows in the church date from the time John Jennings was at Harold’s Cross. The East Window in the sanctuary is composed of three very large lancets, from the studio of Mayer & Co, Munich (1907), depicting the Parable of the Lost Coin (left), Christ the Light of the World (centre) and the Parable of the Prodigal Son (right). 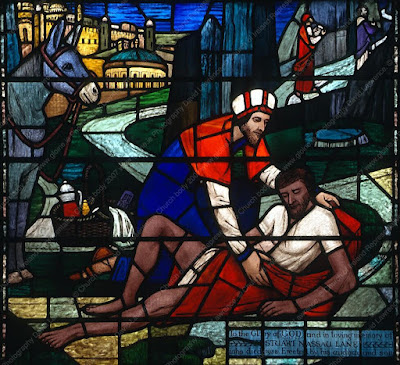 The church had a long association with the Boys’ Brigade, and the basement was used as a parish school. William Hayes, who was the Sunday School superintendent in the late 19th century was one of three founding partners in the pharmacists Hayes Conyngham Robinson in 1897.

The last Church of Ireland service was held in the church on 27 June 2001, and the church closed. It has later leased to the Moscow Patriarchate of the Russian Orthodox Church and is now the Russian parish church of Saint Peter and Saint Paul.

The congregation includes Orthodox people from the former Soviet Union, Eastern Slovakia, the Baltic States and Poland, as well as Irish Orthodox parishioners. The Liturgy is served in Church Slavonic, English and some Irish, and the icons on the iconostasis include Saint Patrick and Saint Brigid.

(For the Roman Catholic Parish Church of the Holy Rosary, see HERE) 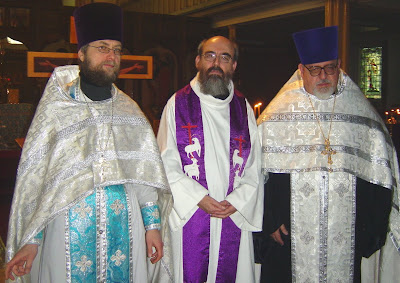 'Thomas Henry Mack (1974-1976), who had been Headmaster of Saint Patrick’s Grammar School.'
Was Tom Mack not at Christ Church? Mark.

My Grand father was head master of Harolds Cross School