‘Not by might, nor by power, but
by my spirit, says the Lord of hosts’ 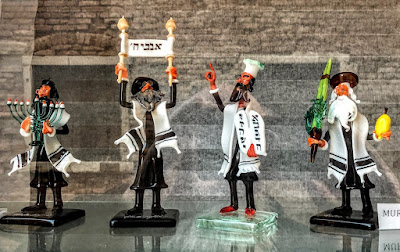 Four figures in Murano glass in a shopfront in the Ghetto in Venice … the figure on the left is celebrating Hanukkah with a Hanukkiah or Hanukkah Menorah (Photograph: Patrick Comerford, 2021)

The story of Hanukkah is recalled in I Maccabees:

52 Early in the morning on the twenty-fifth day of the ninth month, which is the month of Chislev, in the one hundred and forty-eighth year, 53 they rose and offered sacrifice, as the law directs, on the new altar of burnt-offering that they had built. 54 At the very season and on the very day that the Gentiles had profaned it, it was dedicated with songs and harps and lutes and cymbals. 55 All the people fell on their faces and worshipped and blessed Heaven, who had prospered them. 56 So they celebrated the dedication of the altar for eight days, and joyfully offered burnt-offerings; they offered a sacrifice of well-being and a thanksgiving-offering. 57 They decorated the front of the temple with golden crowns and small shields; they restored the gates and the chambers for the priests, and fitted them with doors. 58 There was very great joy among the people, and the disgrace brought by the Gentiles was removed.

59 Then Judas and his brothers and all the assembly of Israel determined that every year at that season the days of dedication of the altar should be observed with joy and gladness for eight days, beginning with the twenty-fifth day of the month of Chislev (I Maccabees 4: 52-59).

The rabbis taught that during the eight days of Hannukah there shall be neither mourning nor fasting. The story is not a story of rebellion or war, violence or victory, but a story of a miracle wrought by God, the triumph of light over darkness, and the victory of liberty against hatred and oppression.

The Talmudic tradition stresses the miracle of the cruse of oil and mentions the Hasmonean struggle only cursorily. While the Talmud contains an entire tractate devoted to Purim, there is no tractate devoted specifically to Hannukah, although the festival is mentioned several times in the Mishnah.

The early authorities sensed that the Hasmonean victories had already lost their lustre by the Mishnaic period. Abudraham claims that while the Hasmoneans were initially pious, they sinned by making themselves the rulers of the Jewish state, an office not to be assumed by a priestly family.

As Kohanim, the Hasmoneans had no right to assume royal authority. The Pharisees turned against the Maccabees and demanded that they give up the high priesthood.

Eventually, Herod, who exterminated virtually all the Hasmoneans who were alive during his reign. Later, Rabbi Yehudah Hanassi, who claimed to be a direct descendant of King David, regarded the Hasmoneans as usurpers since they were not members of the Davidic dynasty.

The Hasmonean dynasty had lost its glory by the time of the Mishnah, and Hanukkah was in danger of being forgotten as a celebration. When the festival was re-established, the emphasis was on the miracles at the rededication of the Temple, particularly the miracle of the cruse of oil.

The message of Hanukkah is expressed in the prophetic words of the Haftarah of the Sabbath of Hanukkah: ‘Not by might, nor by power, but by my spirit, says the Lord of hosts’ (Zechariah 4: 6).

It is striking that Hanukkah commemorates one event that was incidental to a successful war of independence fought against an oppressive foreign ruler, and that this event was neither a victory on the field of battle nor a political transaction that gave official recognition to a hard-won independence.

During the eight days of Hanukkah, although work is permitted, all signs of sadness are to be avoided, there is no fasting, and eulogies and tziduk hadin are omitted at funerals.

Hanukkah is also known as the Festival of Lights because it is marked by the kindling of lights at home and in the synagogue. The hanukkiah or Hanukkah Menorah should be placed where it can be seen from outside the house in order to proclaim the miracle of Hanukkah to all passers-by.

On the Sabbath, two Torah scrolls are taken out, and the Haftarah is Zechariah 2: 14 to 4: 4, chosen because it mentions the Menorah and also because it includes the verse ‘Not by might, nor by power, but by my spirit, says the Lord of hosts’ (Zechariah 4: 6), which has become the motto of Hanukkah.

The festival recalls a great act of faith, commemorating the liberation of the people ‘in those days, at this season.’ Hanukkah symbolises the struggle of the few against the many, the weak against the strong, an eternal struggle for faith and existence. To the world, it proclaims the eternal message of the prophet Zechariah: ‘Not by might, nor by power, but by my spirit.’ 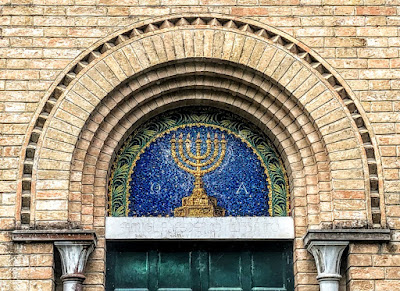 A Menorah on the Luzzatto family memorial in the Jewish Cemetery on the Lido of Venice (Photograph: Patrick Comerford, 2021)