49 days of preparation and growth,
of leaving slavery and getting
ready for social responsibility 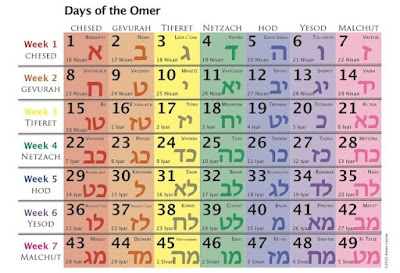 Last Friday was Pesach or the Feast of the Passover. Now, this 49-day period that follows Passover and leads up to Pentecost or Shavout is marked with the Counting of the Omer.

The idea of counting each day represents spiritual preparation and anticipation for the giving of the Torah on Mount Sinai at the beginning of the month of Sivan, at the same time as the holiday of Shavuot.

The former Chief Rabbi, the late Lord (Jonathan) Sacks, writes: ‘The 49 days, connecting the Exodus from Egypt with the giving of the Torah at Mount Sinai, are a time of preparation and growth – of leaving a world of slavery and getting ready to enter a world of social and special responsibility.’

The Counting of the Omer (סְפִירַת הָעוֹמֶר‎, Sefirat HaOmer), sometimes known simply as ‘Sefira’ or ‘the Omer,’ is an important verbal counting of each of the 49 days. This mitzvah or commandment derives from the Torah commandment to count 49 days beginning from the day on which the Omer, an omer-measure of barley, was offered in the Temple in Jerusalem, until the day before an offering of wheat was brought to the Temple on Shavuot (see Leviticus 23: 9-21, Deuteronomy 16: 9-12).

On the 50th day after the beginning of the count, corresponding to the holiday of Shavuot or Pentecost, two loaves of wheat were offered in the Temple to signal the wheat harvest.

The Sefer HaChinuch in 13th-century Spain says the slaves were only freed from Egypt at Passover in order to receive the Torah at Sinai, an event now celebrated on Shavuot, and to fulfil its laws.

However, the obligation after the destruction of the Temple is a matter disputed. Rambam (Maimonides) suggests that the obligation is still biblical, but most other commentaries assume it is of a rabbinic origin in modern times.

Some later rabbinic sources link the Omer count to the experience of the freed people in the desert. They say at the time of the Exodus, Moses announced that 50 days later they would celebrate a religious ceremony at Mount Sinai. The people was so excited that they counted the days until that ceremony took place. Later, when the Temple was destroyed and the Omer offering ceased, the rabbis instituted Omer counting to remember the counting up to Sinai.

Jonathan Sacks says ‘the Jewish mystics attached special significance to this period of the year as one in which the various facets of the soul were cleansed, one by one.’

In keeping with the themes of spiritual growth and character development in this time, Rabbinic literature compares the process of growth to the two types of grain offered at either end of the counting period: barley was simpler food while wheat was more luxurious.

The Exodus was an unearned gift from God, like the food of simple creatures who are not expected to develop their spiritual potential. Receiving the Torah created spiritual elevation and active cooperation. In this way, the Shavuot offering is ‘people food.’

As soon as it is definitely night – about 30 minutes after sundown – the person who is counting the Omer recites a blessing: ‘Blessed are you, Lord our God, King of the Universe, who has made us holy through his commandments, and has commanded us about counting the Omer.

Then that person states the count in terms of both total days and weeks and days. For example, on the seventh day of the count, the words in Hebrew declare: ‘Today is seventh day, making one week of the Omer.’

‘Omer-counters’ (לוּחַ סְפִירָת הָעוֹמֶר‎) in synagogues and homes can range from decorative boxes with an interior scroll to posters and magnets with tear-off pieces of paper, calendars, pegboards, reminders on tablets and laptops, and even SMS messages.

Psalm 67 is selected for this time because the psalm, excluding the superscription, contains 49 words in Hebrew, corresponding to the days of the counting of the Omer.

The period of counting the Omer is also a time of semi-mourning, during which traditional Jewish custom forbids haircuts, shaving, listening to instrumental music, or conducting weddings, parties, and dinners with dancing. Traditionally, the reason cited is that this is in memory of a plague that killed the 24,000 students of Rabbi Akiva ca 137 CE.

Lag BaOmer, the 33rd day of the Counting of the Omer (18/19 May 2022), marks the day the plague was lifted, and so on that day all the rules of mourning are lifted. However, some Sephardi Jews continue the mourning period until the 34th day of the Omer.

The period of the counting of the Omer is considered to be a time of potential for inner growth – for a person to work on one’s good characteristics (middot) through reflection and development of one aspect each day for the 49 days of the counting.

In Kabbalah, each of the seven weeks of the Omer-counting is associated with one of the seven lower sefirot: Chesed (loving kindness), Gevurah (might), Tipheret (beauty), Netzach (victory), Hod (acknowledgment), Yesod (foundation) and Malchut (kingdom).

Each day of each week is also associated with one of these same seven sefirot, creating 49 permutations. Symbolically, each of these 49 permutations represents an aspect of each person’s character that can be improved or further developed.

Some rabbis suggest this time also recalls the Jews who were murdered during the Crusades and the pogroms across Europe. In modern times, the Holocaust is also included among those events that are recalled: Yom Hashoah or Holocaust Memorial Day is observed during the Omer, and begins this year on Wednesday evening next (27 April) and continues until Thursday evening (28 April).