Three books for
a pilgrim visitor to
Lichfield Cathedral 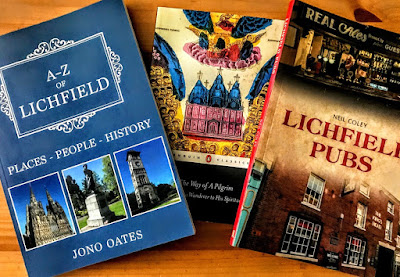 When the Lichfield Cathedral Gift Shop was at No. 9 The Close, it provided an interesting collection of books of local interest and had a quiet corner brimming full with second-hand books that could keep me quiet, rummaging in seclusion, for hours.

The shop faced the west front of the Cathedral, and was also well-stocked with CDs, including recordings by the cathedral choir, as well as appropriate cards and gifts that I often bought for students at their ordination.

The shop also supported local artists and suppliers, stocking a range from artists working in Lichfield and Staffordshire.

The shop closed last year, but reopened in October as Lichfield Cathedral Gift Shop and Box Office at 11 Baker’s Lane in the Three Spires Shopping Centre. In recent weeks, however, that too has closed.

However, books, CDs and gifts are still on sale in a corner of the cathedral, and I came away this week with three books.

A-Z of Lichfield, Places, People, History is the first book by local historian and tour guide Jono Oates and covers the history of the city using the letters of the alphabet, from A to Z.

Jonathan ‘Jono’ Oates is a tour guide and local historian who lives in Lichfield. He worked for over 10 years as a tourism officer for Visit Lichfield, the tourism department at Lichfield District Council. Jono writes for City Life in Lichfield, a Lichfield magazine, and also writes website and social media reviews about plays and musicals including those at the Lichfield Garrick theatre.

I missed his book signing in Lichfield Library last weekend [14 September] during the Lichfield Heritage Festival, so was glad to buy it in the cathedral this week.

The cathedral city is known to many as the birthplace of Samuel Johnson, who published his Dictionary of the English Language in 1755, but was also home to the Shakespearean actor David Garrick, the antiquarian Elias Ashmole, who gave his name to the Ashmolean Museum in Oxford, and Erasmus Darwin, grandfather of Charles Darwin.

This book offers readers an engaging tour of Lichfield, tracing its roots back to Saint Chad in the seventh century, through the English Civil War, its period of prosperity in the 18th century as a coaching city, and the Victorian era that left its architectural and economic marks on the city in the 19th century.

Jono introduces us to famous people, brings us through narrow streets and lanes, and invites us to look at old houses, churches and pubs with new pairs of eyes.

Here are the amazing stories of Stephen Panting, who tried to embezzle the Garrick family, the missing statue of ‘Old Father Time,’ the genealogist Gregory King and the shocking story of Colonel James Kilian who was a war-time hero in Lichfield but later faced war crimes charges in Germany in 1946.

The story of Lichfield Youth Hostel Association might have been enhanced by telling the story of the Youth Hostel on Birmingham Road, the first place where I stayed in Lichfield 50 years ago and known to many as ‘Mrs Buckingham’s Palace.’

Like a good Scrabble player, the author of a book like this needs a creative and imaginative approach to using the letters Q, X and Z. In the case of Lichfield, Quonians Lane provides the obvious answer to Q, although he does not explore the meaning of its name, but he also includes Quantril’s butchers and the Queen’s Head in Sandford Street.

I had never heard of the X-Ray car at Kennings on Saint John Street in 1939, and Z offers some interesting nuggets on Zeppelins, Zoonomia (thanks here to Erasmus Darwin), Zachary Turnpenny, and Appoline Zuingle. But you have to buy the book, and read right through to the end to find out why Appoline and Zachary also have their place in this A-Z. 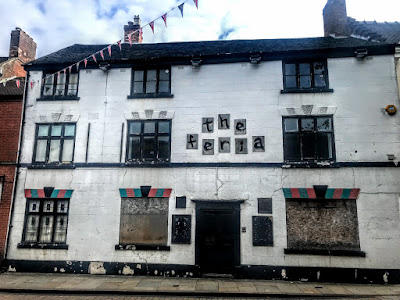 The former Prince of Wales on Bore Street has been in a sad state of abandonment since 2004 (Photograph: Patrick Comerford, 2019)

When it came to writing about Lichfield’s pubs and former pubs, my go-to book for many years was John Shaw’s The Old Pubs of Lichfield (2001). However, this week I bought Neil Coley’s Lichfield Pubs, which I had known of but had not held in my hands until now.

Neil Coley, who lives in Lichfield, is the author of a number of local history books and articles. He has a BA degree in History and Politics from Lancaster University and an MA in Media from De Montford University.

In the 18th century, Lichfield was notorious for its many pubs and brothels. Today, only its pubs are famous. Many of these pubs date from the Georgian era, others claim even greater antiquity and longevity, and some were visited by Lichfield’s most famous son, Samuel Johnson.

These pubs, with their beguiling names and histories, hold the stories of old coaching inns with their stagecoaches and highwaymen. There are lost pubs that have been turned to other uses, including shops (the Woolpack on Bore Street or the Bald Buck on Greenhill), restaurants (the Swan and the Wheatsheaf on Bird Street) and private houses (the Lemon Tree, the Pheasant or the Little George on Beacon Street).

Here too you can find Lichfield’s first micropub, the Whippet Inn on Tamworth Street and a reference to the ‘Carry On’ innuendo that gives it its name.

An army regiment was founded in the King’s Head on Bird Street and there are two rival inns where political parties encouraged mob violence in the street that separated them.

Some of my favourites are missing, such as the Hedgehog on Stafford Road, because they are too far out from the city.

This book may inspire the compilers of pub quizzes and settle many arguments about which is the oldest pub in Lichfield or what is meaning of an old name, and tell us who knows the King’s Head from the Queen’s Head.

As I watched a wedding party make their way into the King’s Head on Bird Street this week and looked at the sad state of the former Prince of Wales on Bore Street, I was aware of how important books like this are for local memory and handing on traditions.

My return visits to Lichfield are always mini-pilgrimages, with time for prayer, silence, contemplative walks and church visits. So, I was glad this week to pick up another copy of The Way of a Pilgrim. My old copies, translated by RM French and introduced by Bishop Walter Frere, are torn and worn or were given away long ago.

This edition, published in 2017, is translated by Anna Zaranko and edited and introduced by Andrew Louth, who was one of my lecturers some years ago at a course run by the Institute of Orthodox Studies (IOCS) at Sidney Sussex College, Cambridge.

This book began as a collection of essays first published as four short stories in Russia in 1884. It was introduced to many in the west through JD Salinger’s Franny and Zooey, ant is now a beloved spiritual guide to many, introducing them to the Jesus Prayer and the riches of Orthodox spirituality.

The Cathedral Shop moved out of The Close last year (Photograph: Patrick Comerford, 2019)