50 years later, we live
in an increasingly
‘Pythonesque’ world

What did the Europeans ever do for us? … a street plaque on the corner of Bore Street and Bird Street, Lichfield (Photograph: Patrick Comerford, 2019)

I spent much of Friday afternoon with former schoolfriends, celebrating 50 years since we left school at Gormanston College in Co Meath.

Over 30 or more 60-somethings gathered together for a long and lingering lunch in the Cliff House in Saint Stephen’s Green, Dublin.

There were sad but grateful memories of those who could not join us for lunch, and we read the names of those we know who have died over the past half century. But the afternoon was filled with memories of what were largely happy school days, and how well we were prepared to go out into the world.

How that world has changed over the past 50 years.

It is 50 years Monty Python’s Flying Circus was first broadcast on BBC1 ago, on 5 October 1969. It went on to run for four series, inspiring four original films, numerous live shows, several albums and many follow-up shows, including Fawlty Towers.

Ten years later, I was a student in Japan in 1979, on a fellowship provided for young journalists by Journalistes en Europe and Nihon Shimbun Kyokai. That year also saw the release of the Monty Python film, The Life of Brian, released on 8 November 1979.

In The Life of Brian, John Cleese plays Reg, who gives a revolutionary speech at meeting, asking, ‘What have the Romans ever done for us?’

Reg: ‘Oh, great. Great. We – we need doers in our movement, Brian, but, before you join us, know this. There is not one of us here who would not gladly suffer death to rid this country of the Romans once and for all.’

John Cleese later parodied his own line in a 1986 BBC advert defending the Television Licence Fee: ‘What has the BBC ever given us?’ The scene inspired a BBC history series, What the Romans Did for Us (2000), written and presented by Adam Hart-Davis. 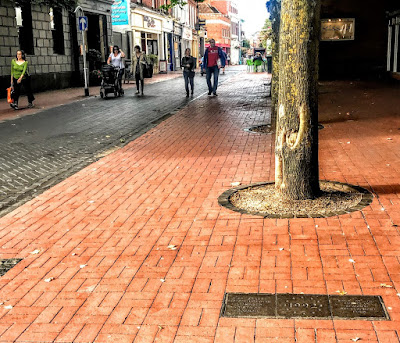 Walking through the streets of Lichfield earlier this week, there was one small reminder of how we live in an increasingly Pythonesque world.

A stone plaque embedded in the paving at the corner of Bore Street and Bird Street reads: ‘Bird Street Pedestrianisation Lichfield District Council aided by the European Regional Development Fund.’ In the centre, the year ‘1992’ is encircled by the 12 stars of the European Union.

Sadly, to paraphrase Reg in The Life of Brian, it seems that in the deeply divided Britain of today, there are some people who might easily declare, ‘There is not one of us here who would not gladly suffer death to rid this country of Europe once and for all.’

I have never known Britain to be so divided as it is today, not even at the height of the miners’ strike. Perhaps it has never been so divided since the English civil war in the 1640s and the 1650s. When I hear people talking about the ‘Dunkirk Spirit,’ I want to remind them that Dunkerque is in France, and that it was a spirit that regretted being forced to withdraw from Europe, that wanted to engage with Europe, to set wrongs to right, to seek justice and peace, and to put an end to the extremes of the far right. I am even more worried about the tangible rise in Islamophobia and racism in ‘middle England.’

I was at a meeting earlier this week at which my former colleague at The Irish Times, Paul Gillespie, spoke of the present Brexit crisis in Britain, and posited four scenarios that may unfold in the months to come, two due to a hard Brexit: the break-up of the UK or a differentiated UK; and two due to a soft Brexit: a renegotiated UK or a federal UK.

Each of these scenarios points to the present crises in British identity and English identity. What does it mean to be British any more, when it seems the majority of people in Scotland, Wales and Northern Ireland appear to resent a move towards a hard Brexit that seems to be driven by English nationalists? And what does it mean any more to be English when English nationalism does not share the social justice values found in either Scottish and Welsh nationalism, and, ironically, appears to be more European than British in that it shares many of the characteristics of populist nationalism found today in France, Spain, Germany, Hungary, Italy and other EU member states?

Writing in the Tablet last week [14 September 2019] under the heading ‘The End of England,’ Professor Nicholas Boyle of Magdalene College, Cambridge, argues the British constitution is crumbling before our eyes, its frailties brutally exposed by the Brexit storm. But, he says, something even more fundamental has been shattered: the country's national identity. He argues the English no longer know who they are as a people, or what they are for.

Apart from the constitutional crisis that is unfolding, there is also a break-down in the unwritten conventions of British political culture. Both Boris Johnson and David Cameron have drawn the monarch into politics in recent weeks, and as I watch the behaviour of Dominic Cummings I find myself thinking the Spivs have taken over the Tory party. As Lord Hennessy wrote in the same edition of the Tablet, ‘it has become starkly apparent: the day of good chap is no more.’

Paul Gillespie also referred to the ‘good chap theory.’ It was invented by a Cabinet Office civil servant, Clive Priestly, who used to put it that the ‘good chaps’ (of both sexes) know where the undrawn lines of the constitution are and make sure they come nowehere near, let alone cross them.

It sometimes worries me when I find myself admiring Tory politicians such as Ken Clarke and John Major and dismissing the leader of the Labour Party because of his failure to deal with antisemitism at all levels of party membership.

Am I beginning to sound too like my father 50 years ago, listening to the news in the mornings and I finding myself acclaiming the vote in the House of Lords the night before?