With the Saints through Christmas (12):
6 January 2022, Balthasar, Melchior and Caspar

Balthasar, Melchior and Caspar … the visit of the Magi in the sixth century Basilica of Sant’Apollinare Nuovo in Ravenna (Photograph: Patrick Comerford)

Today is the Feast of the Epiphany and traditionally the Twelfth Day of Christmas. But Christmas is a season that continues beyond these 12 Days for 40 days until the Feast of the Presentation or Candlemas (2 February).

Later this morning, I am planning to preach and preside at the Epiphany Eucharist in Saint Mary’s Church, Askeaton, Co Limerick. But, before this day gets busy, I am taking some time early this morning for prayer, reflection and reading.

This morning, I am reflecting on the three magi or the three Wise Men, Balthasar, Melchior and Caspar.

The visit of the Magi is a symbolic presentation of God’s revelation in Christ to the Gentiles. This Visit is a popular image for Christmas cards, but very often we have taken down the Christmas cards by the Feast of the Epiphany, and so we are left without a visual reminder of what they represent.

The early mediaeval Church historian from Northumbria, the Venerable Bede, is the first scholar to say that Balthazar is black.

Origen summarises it in this way: ‘Gold, as to a king; myrrh, as to one who was mortal; and incense, as to a God’ (Contra Celsum).

Sometimes this is described more generally as:

There is a tradition that suggests Joseph and Mary used the gold to finance their escape when they fled.

‘We three kings of Orient’ … the Adoration of the Magi in a Christmas card from the Institute for Orthodox Christian Studies, Cambridge

The prayer in the prayer diary of the Anglican mission agency USPG (United Society Partners in the Gospel) invites us to pray this morning (6 January 2022):

Today we celebrate the baptism of Jesus. May we continue to be his witnesses, spreading the Gospel wherever we go. 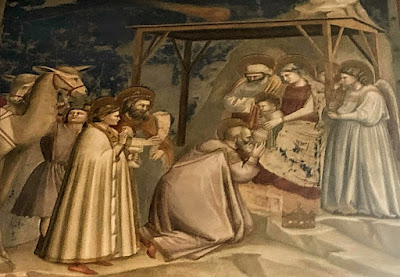 The Visit of the Magi by Giotto in the Scrovegni Chapel in Padua (Photograph: Patrick Comerford, 2021)