With the Saints through Christmas (17):
11 January 2022, Saint Eithne and Saint Fidelma 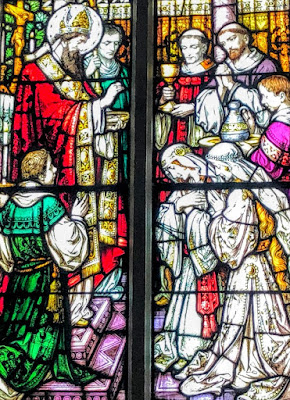 A busy week begins this morning, with meetings in Askeaton, Limerick and Dublin throughout this week. But, before this day gets busy, I am taking some time early this morning for prayer, reflection and reading.

Saint Eithne and Saint Fidelma, the daughters of King Laoghaire, are commemorated traditionally in Irish church calendars and in the Roman martyrology on 11 January.

These sisters were the daughters of King Laoghaire of Connacht, and among Saint Patrick’s first converts to Christianity. They received the veil of religion from his hands, and the tradition is that g immediately after receiving Holy Communion from him they gave up their innocent souls to God.

The name Fidelma means ‘beauty’ or ‘constant,’ and the name Eithne means ‘kernel of a nut or seed.’

The story is told that one summer day Eithne and Fidelma, who were barely out of childhood and full of fun, went for their daily bath in a private place near the palace, a place to which no one ever came so early in the morning. But on this day they were surprised to hear voices and see tents encamped on the grassy slope near the pool.

They could hear the notes of a strange language and every now and again a sweet voice broke into song and mingled with the song of the birds in the nearby woods and the murmuring of the river. Saint Patrick and his companions, who had arrived during the night with a message for the King of Connacht, were praying the Divine Office in Latin.

Finally, each group noticed the other.

The older princess asked, ‘Who are you, and where do you come from?’

Saint Patrick hesitated, and then said: ‘We have more important things to tell you than just our names and where we’re from. We know who the one true God is whom you should adore …’

The girls were delighted and something seemed to light up inside them, to make a blinding white blaze in their hearts and minds. They knew at once that this was real, true news and asked a torrent of questions:

‘Where does he live?’

‘Will he live forever?’

Saint Patrick answered each question quickly and simply. He, too, was delighted: the light that blazed up in the girls was in the man, too, and the three lights together made a tremendous glow. Everyone else stood listening, witnessing the saintly man and the young women in conversation in the presence of the Holy Spirit.

‘Oh, tell us how to find the good God. Teach us more about the kind Jesus, who died upon the Cross. Tell us more, more, more,’ the princesses urged. But there was no need for more; the two had already received the gift of the Holy Spirit.

Saint Patrick led them to their bathing pool, and there he baptised them. For a short time after, Eithne and Fidelma were quiet and deep in prayer. Meanwhile, Saint Patrick prepared to say Mass. Then the princesses began again.

‘And so do I,’ echoed Fidelma. ‘I want to be with him in his home forever.’

Saint Patrick was moved by this loving longing. He gently explained that they would not be able to see God until after their death. They were still young, so it would be a long time before they could see him as he is.

The girls pondered this as Saint Patrick began to celebrate the Eucharist. Everyone was still, but the river and woods seemed to sing God’s praises. Then the youngest man rang a small bell and all bowed their heads. Christ was present, and Saint Patrick beckoned the princesses forward and gave them Holy Communion.

For a while, the princesses looked so happy and so beautiful that they were like angels.

It said Saint Eithne and Saint Fidelma died on 11 January 433.

21 They went to Capernaum; and when the sabbath came, he entered the synagogue and taught. 22 They were astounded at his teaching, for he taught them as one having authority, and not as the scribes. 23 Just then there was in their synagogue a man with an unclean spirit, 24 and he cried out, ‘What have you to do with us, Jesus of Nazareth? Have you come to destroy us? I know who you are, the Holy One of God.’ 25 But Jesus rebuked him, saying, ‘Be silent, and come out of him!’ 26 And the unclean spirit, throwing him into convulsions and crying with a loud voice, came out of him. 27 They were all amazed, and they kept on asking one another, ‘What is this? A new teaching – with authority! He commands even the unclean spirits, and they obey him.’ 28 At once his fame began to spread throughout the surrounding region of Galilee.

The prayer in the prayer diary of the Anglican mission agency USPG (United Society Partners in the Gospel) invites us to pray this morning (11 January 2022):

We pray for new mothers, that they might feel supported at this exciting and nervous time in their lives.