With the Saints through Christmas (18):
12 January 2022, Saint Aelred of Rievaulx 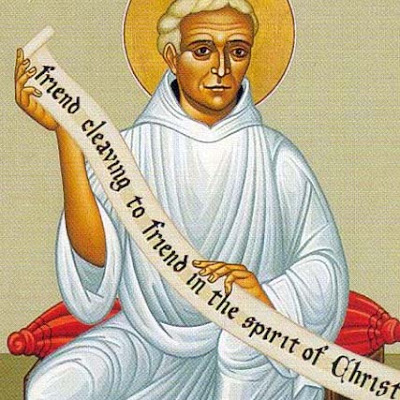 This is a busy week, with meetings in Askeaton, Limerick and Dublin and columns to write for diocesan magazines. But, before this day gets busy, I am taking some time early this morning for prayer, reflection and reading.

Saint Aelred of Rievaulx (1110-1167) was an English Cistercian monk, Abbot of Rievaulx from 1147 until his death, and known as a writer.

Aelred was born in Hexham, Northumbria, in 1110, one of three sons of Eilaf, a priest of Saint Andrew’s at Hexham, and the grandson a son of another Eilaf, treasurer of Durham. In 1095, the Council of Claremont had forbidden the ordination of the sons of priests, in an effort to end the inheritance of benefices. He may have been partially educated by Lawrence of Durham, who sent him a hagiography of Saint Brigid of Kildare.

Saint Aelred’s early education was probably at the cathedral school at Durham. He spent several years at the court of King David I of Scotland in Roxburgh, perhaps from the age of 14. He became the echonomus, steward or Master of the Household, before leaving the court at age of 24 in 1134 to enter the Cistercian abbey of Rievaulx in Yorkshire. His reluctance to leave his friends at court delayed his following his monastic calling.

Aelred travelled to Rome in 1142 with Walter of London, Archdeacon of York, to represent before Pope Innocent II the northern prelates who opposed the election of Henry de Sully, nephew of King Stephen, as Archbishop of York.

Aelred brought back a letter from Pope Innocent summoning those prelates to make their case in Rome, but the negotiations dragged on for many years.

When he returned from Rome, Aelred became novice master at Rievaulx. In 1143, he became abbot of the new Revesby Abbey, a daughter house of Rievaulx in Lincolnshire. Then, in 1147, he was elected Abbot of Rievaulx, a position he held until his death. While he was abbot, the abbey is said to have grown to some 140 monks and 500 conversi and laymen.

Rievaulx had five daughter-houses in England and Scotland while Saint Aelred was abbot. He visited these houses regularly, and also attended the annual general chapter of the Cistercians in Cîteaux in France.

Throughout his life, Saint Aelred was involved in political affairs. The Peterborough Chronicle says his efforts during the 12th-century papal schism resulted in Henry II’s decisive support for the Cistercian candidate, resulting in the formal recognition of Pope Alexander III in 1161.

Saint Aelred wrote several influential books on spirituality, including Speculum caritatis (‘The Mirror of Charity’), written at the request of Saint Bernard of Clairvaux, and De spiritali amicitial (‘On Spiritual Friendship’).

Until the 20th century, Saint Aelred was generally known as a historian rather than as a spiritual write, and for many centuries his most famous work was his Life of Saint Edward, King and Confessor.

Aelred is remembered in the Church of England and many other church calendars on 12 January.

29 As soon as they left the synagogue, they entered the house of Simon and Andrew, with James and John. 30 Now Simon’s mother-in-law was in bed with a fever, and they told him about her at once. 31 He came and took her by the hand and lifted her up. Then the fever left her, and she began to serve them.

32 That evening, at sunset, they brought to him all who were sick or possessed with demons. 33 And the whole city was gathered around the door. 34And he cured many who were sick with various diseases, and cast out many demons; and he would not permit the demons to speak, because they knew him.

35 In the morning, while it was still very dark, he got up and went out to a deserted place, and there he prayed. 36 And Simon and his companions hunted for him. 37 When they found him, they said to him, ‘Everyone is searching for you.’ 38 He answered, ‘Let us go on to the neighbouring towns, so that I may proclaim the message there also; for that is what I came out to do.’ 39 And he went throughout Galilee, proclaiming the message in their synagogues and casting out demons.

The prayer in the prayer diary of the Anglican mission agency USPG (United Society Partners in the Gospel) invites us to pray this morning (12 January 2022):

Let us pray for those who specialise in maternal healthcare, ensuring that mothers are provided for during and after pregnancy.