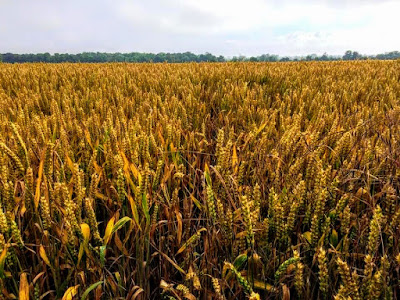 ‘Unless a grain of wheat falls into the earth and dies, it remains just a single grain; but if it dies, it bears much fruit’ (John 12: 24) … a field of wheat in Donabate, Co Dublin (Photograph: Patrick Comerford, 2018)

Throughout this week, as we journey together through Holy Week, we continue the gradual build-up from Palm Sunday, with services each evening in this group of parishes. We were in Saint Mary’s, Askeaton yesterday [26 March 2018]. This evening [27 March] we are here in Saint Brendan’s, Tarbert. Tomorrow, we journey on to Rathkeale, then to Castletown for the Maundy Eucharist on Thursday evening, so that we can mark Good Friday prayerfully and appropriately in Saint Mary’s Church, Askeaton.

All this is to prepare us to celebrate the Resurrection, on Easter Eve in Rathkeale and Castletown and on Easter Morning in Askeaton and here in Tarbert.

The setting is the day of Christ’s triumphal entry into Jerusalem, Palm Sunday. Jerusalem is a city teeming with people who have come to celebrate the Feast of the Passover.

These Greek-speaking Jews of Alexandria were such an important group in Jewish and Greek society at the time that they even had their own synagogue in Jerusalem, and some of them rose to the rank of High Priest, including Simon son of Boethus, who was High Priest (ca 23-24 AD) in the Jesus’ own lifetime, and who was also the father-in-law of Herod the Great.

We are not told how many of them wanted to see Jesus that first Palm Sunday. But in the chaos and the turmoil, in the hustle and bustle of the day, they could not get to see Jesus, despite their best efforts.

Many of these Greek-speaking Jews in Jerusalem were identified with a small Jewish sect (the Boethusians) that disagreed on a number of points of belief with other Jews, including the Pharisees and the Sadducees.

They were a minority in many ways in Jerusalem: they were Greek speakers, they were a religious minority within Judaism, they celebrated their festivals on different days, and when Herod sacked Simon son of Boethus, they lost their access to influence and power.

Now they want access to Jesus and to see him, and they feel marginalised and excluded once again. And so, they turn to two of the disciples with Greek names – Philip first and then Andrew – declaring, ‘Sir, we wish to see Jesus.’

Did they get to see Jesus?

Probably yes, because of the words of Jesus’ response.

One of the ways some of these Greek-speaking Jews in Jerusalem (the Boethusians) disagreed with the Pharisees, the Sadducees and other Jews, was on what might now seem to be an obscure point. They believed that the sheaf due at the Passover was to be offered on the day after the actual Shabbat of the festival week, in other words, on the Sunday.

These calculations also meant that they always celebrated the Feast of the Pentecost on a Sunday.

When Christ talks about the grain of wheat falling into the earth, he may be speaking about that wheat offering. He tells them to expect the Resurrection next Sunday.

When we feel marginalised and excluded, when we feel we cannot see Jesus in the crush and the clamour of every-day life, we can still look forward to the hope of Easter.

When others count us out, Christ speaks our language, Christ counts us in. And, even when we think otherwise, the hope of Easter, the hope of the Resurrection, is always offered to us.

In the Resurrection, no-one is marginalised, no-one is counted out. In Christ, there is no us and them, there is only us.

27 ‘Now my soul is troubled. And what should I say – “Father, save me from this hour”? No, it is for this reason that I have come to this hour. 28 Father, glorify your name.’ Then a voice came from heaven, ‘I have glorified it, and I will glorify it again.’ 29 The crowd standing there heard it and said that it was thunder. Others said, ‘An angel has spoken to him.’ 30 Jesus answered, ‘This voice has come for your sake, not for mine. 31 Now is the judgment of this world; now the ruler of this world will be driven out. 32 And I, when I am lifted up from the earth, will draw all people to myself.’ 33 He said this to indicate the kind of death he was to die. 34 The crowd answered him, ‘We have heard from the law that the Messiah remains forever. How can you say that the Son of Man must be lifted up? Who is this Son of Man?’ 35 Jesus said to them, ‘The light is with you for a little longer. Walk while you have the light, so that the darkness may not overtake you. If you walk in the darkness, you do not know where you are going. 36 While you have the light, believe in the light, so that you may become children of light.’ After Jesus had said this, he departed and hid from them.