Going beyond the drama in
search of the ‘real East End’ 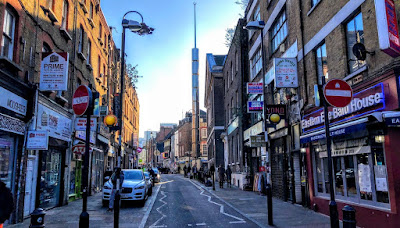 Brick Lane in the heart of the East End (Photograph: Patrick Comerford, 2020)

For many years I have been a fan of EastEnders. I remember many of the original characters, I remember Den and Angie, and I even remember when Ian Beale was a boy.

I know it’s not to everyone’s taste, but it’s the only soap I watch on television, four times a week – Mondays, Tuesdays, Thursdays and Fridays – and I prefer to watch it on the BBC, without interruption.

Sometimes, the melodramatics – pubs being burned down, people being kidnapped, thrown off bridges or tops of buildings, murders in the woods – and sometimes the avoidance of the real political issues of the day, such as Brexit, take away from the real drama on EastEnders that offers a slice of life in London today. 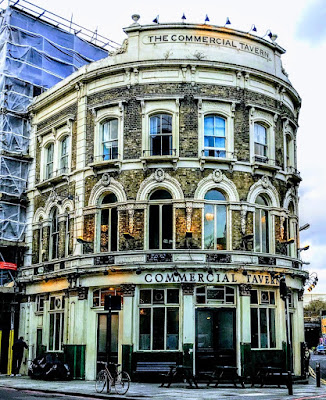 Even Dot Cotton’s habit of quoting random verses of Scripture, often out of context, or its stereotypical ‘more tea’ vicars who seem to pop up only for the ‘hatch, match and dispatch’ moments of Baptisms, Weddings and Funerals, invite discussion about the relevance of Christian faith in the world today. 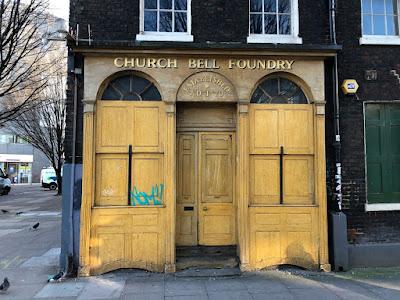 It is easy to criticise EastEnders for presenting an East End that is long gone but idealised by the children and grandchildren of East Enders who were moved out to Essex shortly before or after World War II.

It is similar to the criticism of Coronation Street for its portrayal of the North of England, or the critics of Emmerdale who insist that England is no longer the ‘green and pleasant land’ of William Blake’s Jerusalem.

Of course, Blake is saying that England is more like ‘these dark satanic mills’ than a ‘green and pleasant’ land. These critics ignore how poetry, song and drama have a different way of presenting reality. And with its dialogue, sets, characters and storylines, EastEnders is in the tradition of classical English drama. 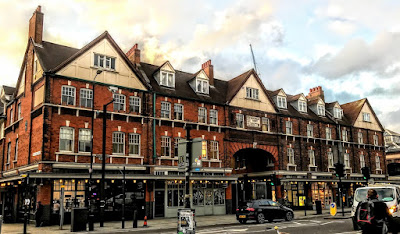 Spitalfields Market … there has been a market on the site since 1638 (Photograph: Patrick Comerford)

I often pass through the East End as I take the train from Stansted Airport to Liverpool Street station, on my way to Southwark and meetings of the trustees of the mission agency USPG (United Society Partners in the Gospel).

The City of London spread out around Liverpool Street and Saint Paul’s Cathedral. As the docks of the old East End closed and as old communities have been rehoused in Essex and Hertfordshire, the City has started to intrude into areas that once would never have been seen as fashionable and desirable.

But how many people who work in the world of capital, investment and finance know the real East End for themselves?

On some recent visits, I have taken the opportunity to stroll through different parts of the East End, and to ask whether the life and diversity found in places such as Mile End, Brick Lane, Commercial Road, Cable Street and Whitechapel are truly reflected in EastEnders. 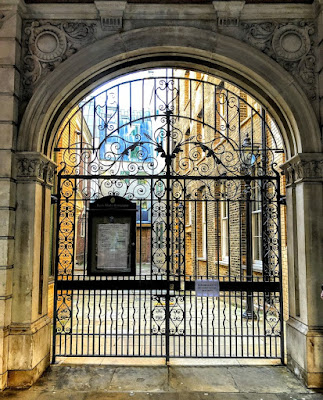 Where is the East End?

The East End developed east of the Roman and mediaeval walls of the City of London, and north of the River Thames. It has no generally accepted boundaries and parts of it now lie within Central London.

Of course, it is difficult to define the borders of Central London too. But the East End includes Spitalfields, Shoreditch, Bishopsgate, Whitechapel, Tower Hamlets, parts of Hackney, Stepney and Mile End.

The East End began to emerge in the Middle Ages but really developed from the late 18th and early 19th centuries, when London was seen as having four parts: the City of London, Westminster, Southwark and those areas beyond the Tower of London. Eventually, the East End spread east of the River Lea and into Essex.

The East End was known for its poverty, overcrowding and social problems, which motivated both political activists and social reformers.

But alongside these social and economic problems, the East End has also been associated with migration, beginning with Sephardic Jews and Huguenot refugees. They were quickly followed by successive generations of Irish weavers, Ashkenazi Jews, and, in the 20th century, families from Bangladesh.

When the Sephardic Jews arrived in London from Amsterdam in the late 17th century, they were the descendants of Portuguese and Spanish Jews who had been forcibly converted to Christianity or persecuted by the Inquisition. They built the Bevis Marks Synagogue which remains the oldest continuously operating synagogue in Europe. 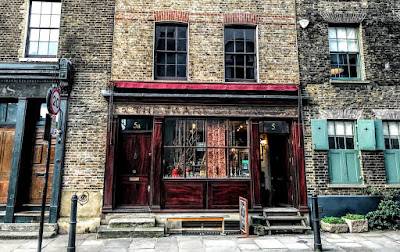 The Huguenot refugees who arrived in the 17th century created a new area in Spitalfields. But the Huguenot weavers and the Irish weavers often found themselves in contact with each other.

The Spitalfield Riots were put down with brutal force and ended with two men being hanged publicly in front of the Salmon and Ball, a public house at Bethnal Green: John Valline, who was from a Huguenot family, and John Doyle, an Irish weaver. 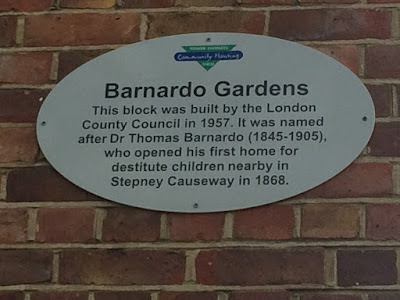 The East End has also been associated with generations of social reformers, often motivated by their religious faith. The beginnings of the Salvation Army can be traced to William Booth preaching in a tent in Whitechapel in 1866, and Thomas John Barnardo, a Dublin-born doctor, set up his ‘ragged schools’ in the East End around the same time.

Toynbee Hall, founded in 1884, provided a springboard for social reformers. It was associated with people like RH Tawney, Clement Atlee and gave rise the Workers’ Educational Association, and later the Citizens’ Advice Bureau and the Child Poverty Action Group. 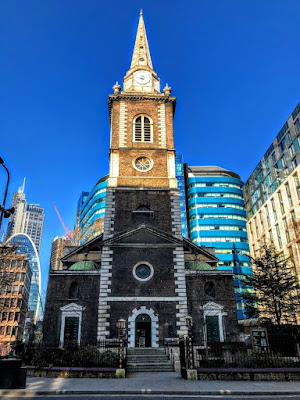 The work of the philanthropist Angela Burdett Coutts in the East End, including Spitalfields and Bethnal Green, led to formation of the first societies for the prevention of cruelty to children.

It was the home of the great Anglo-Catholic slum priests in the Victorian Church of England and later of activists and priests like the Revd Kenneth Leech, who died five years ago. 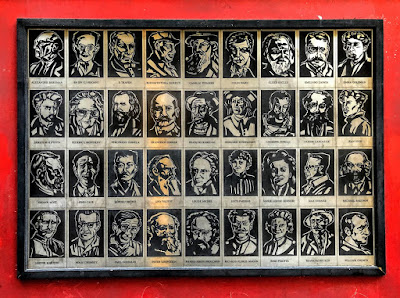 Radicals and anarchists commemorated in a mural in Angel Alley (Photograph: Patrick Comerford, 2020)

At the beginning of the 20th century, the East End also attracted socialist, communist and anarchist revolutionaries, including Kropotkin, Lenin, Trotsky and Stalin, as well as Maxim Gorky and Rosa Luxemburg. 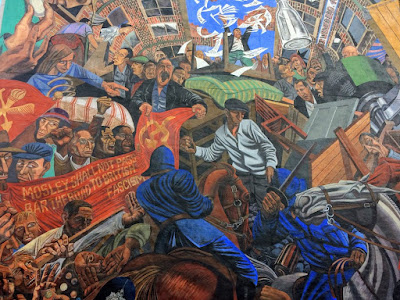 Dublin-born Max Levitas was one of the heroes of the Battle of Cable Street (Photograph: Patrick Comerford)

The Battle of Cable Street took place in in the East End on Sunday 4 October 1936. When Oswald Mosley and his Fascists tried to march through the East End, the police were sent in to protect the marchers rather than the Jewish people and local communities in the East End.

A petition supported by 100,000 local people was rebuffed by the Home Secretary, John Simon. When 20,000 anti-fascist demonstrators turned out, they were confronted by 2,000-3,000 fascists marchers protected by 6,000 police.

The heroes of the Battle of Cable Street, in eyes of many East Enders, included Dublin-born Max Levitas, later a councillor in Stepney for 15 years. He was still politically active when he died at the age of 103 on 2 November 2018. 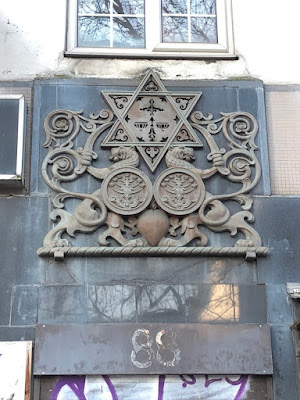 In many ways, the story of the changing nature of religious pluralism and cultural diversity in the East End is told in the changes that transformed a Huguenot chapel into a synagogue before it became Brick Lane Mosque.

Brick Lane Mosque stands on the corner of Fournier Street and Brick Lane, just a short walk from Whitechapel station. High above the separate entrances for men and women to the mosque, a stone sundial is carved with the Latin words Umbra Sumus, ‘We are shadows.’ 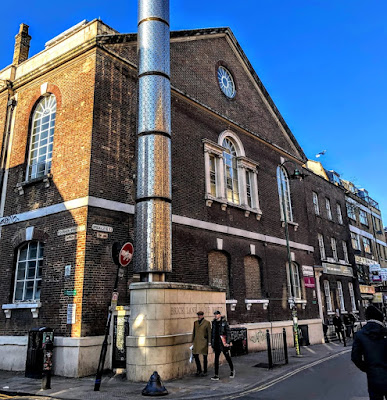 These words and the date 1743 above reflect the long history of a building that has stood in the heart of the East End for almost 250 years. It has been a centre of worship for successive generations of immigrants who have made the East End their home. Over time, it has been a Huguenot church, an evangelical mission hall, a Methodist chapel, a synagogue and a mosque.

It was originally built as a church by French Huguenots who settled in the Spitalfields area, having fled religious persecution in France after the revocation of the Edict of Nantes in 1685.

It was built in 1743 as La Neuve Eglise or the ‘New Church’ by Huguenots. At the same time, the Church of England built Christ Church, Spitalfields, at the other end of Fournier Street. 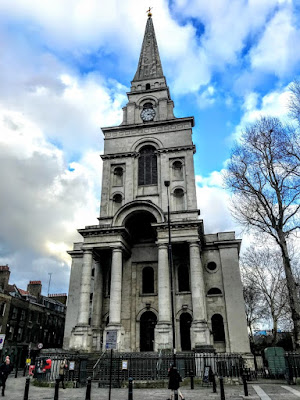 Christ Church, Spitalfields, at the other end of Fournier Street (Photograph: Patrick Comerford)

The Huguenot chapel on Brick Lane survived for more than six decades. But when weaving declined with industrialisation in the north of England, these Huguenots moved on and their church on Brick Lane fell out of use.

It was bought in 1809 by the London Society for Promoting Christianity Amongst the Jews, now known as the Church’s Ministry Among Jewish People. But this mission hall lasted only 10 years, and from 1819 it was a Methodist chapel.

Later, it became the main synagogue of a new Jewish community that started to arrive in this part of the East End from the mid-19th century on.

The former Huguenot church at 59 Brick Lane was acquired by a Jewish immigrant community in 1898 and was known as the Spitalfields Great Synagogue. 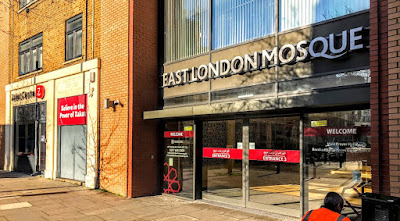 But over the years, the Jewish population in the East End declined, with many people moving to other parts of East London and to suburbs in North London. The synagogue in Brick Lane closed in 1973 and a successor congregation opened in Golders Green. Only four of the 150 synagogues that were built in Tower Hamlets remain today.

Meanwhile, the Bengali community in Tower Hamlets was growing rapidly in the second half of the 20th century and it now makes up 32 per cent of the total population of Tower Hamlets. The Brick Lane Synagogue was sold in 1975 and was transformed into a mosque, reopening in 1976 as the London Great Mosque. 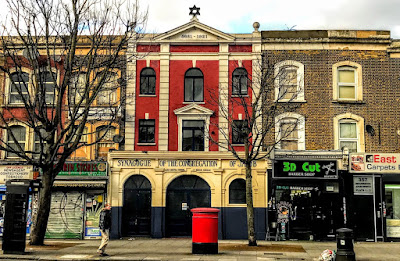 The Synagogue of the Congregation of Jacob is one of five remaining synagogues in the East End (Photograph: Patrick Comerford)

The East End has given us the Whitechapel Bell Foundry, Fish and Chips, the Cockney dialect, ‘rhyming slang’ and the Pearly Kings and Queens among the fruit and vegetable stallholders on the streets and in the markets of the East End.

The closure of the last of the East End docks in 1980 created further challenges and led to attempts at regeneration at the London Docks and Canary Wharf, and the Olympic Parks means the East End is going through further change.

Sadly, to this day, however, some parts of the East End continue to live with some of the worst poverty in Britain. 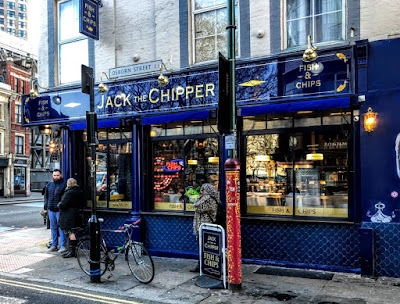 This feature was first published in the ‘Church Review’ (Dublin and Glendalough) in March 2020.