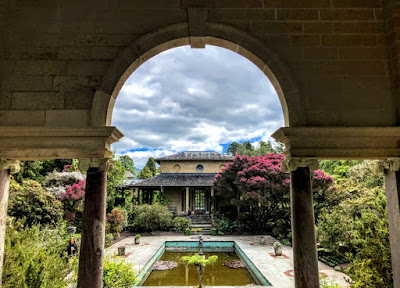 During this month’s road trip or ‘staycation’, there were three stopovers: two nights each in Dingle, Co Kerry, and the West Cork Hotel in Skibbereen, before staying for two nights in Glengarriff at Casey’s Hotel.

It was also a three-island road trip, with visits to the Great Blasket Island, Cape Clear Island, and then, from Glengarriff, to Garinish Island.

Glengarriff is about 20 km west of Bantry and 30 km east of Castletownbere, and the economy is heavily dependent on tourism. It is the gateway to the Beara Peninsula, connecting Bantry and Kenmare and there is a variety of shops, galleries, hotels, restaurants and pubs. 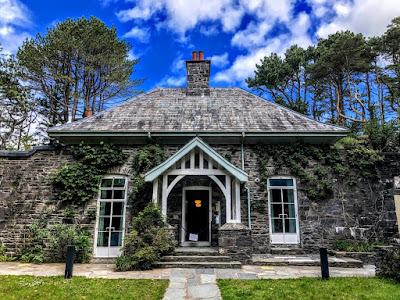 Bryce House at the east end of the island (Photograph: Patrick Comerford, 2021)

Glengarriff has been known as a holiday destination since the 1700s and boomed in the Victorian times as a stop along the ‘Prince of Wales Route’. Today, Glengarriff has a population of 800 and in normal times, outside Covid, this expands significantly during the summer months.

Glengarriff offers natural beauty, peace and tranquillity. The name Glengarriff comes from the Irish An Gleann Garbh, meaning ‘the Rugged Glen.’ It sits in a glacially deepened valley in West Cork, nestled by the foothills of the Caha Mountains with a unique climate that is mild and temperate thanks to the Jet Stream that warms the waters of Bantry Bay. This is one of the few areas that retains much of the ancient woodlands that once covered these islands.

Local sites of tourist interest include the Italian Gardens on Garinish Island, visited by boat trips. Other tourist amenities include the Bamboo Park behind Toad Hall, the Blue Pool lagoon, Barley Lake, walking trails, kayaking in the bay and music festivals. 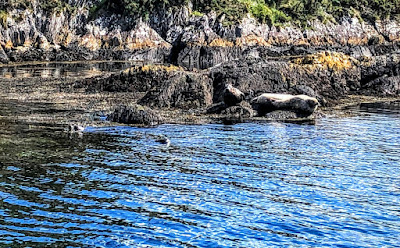 The seal island, with its tame seal colony, is a sight from the ferry to Garinish Island (Photograph: Patrick Comerford, 2021)

Two of us took the Harbour Queen Ferry from Glengarriff Pier to visit this island in the harbour of Glengarriff in Bantry Bay. Garinish is renowned for its gardens, laid out in beautiful walks and it has specimen plants that are rare in this climate.

The ferry trip brought us close to seal island, with its tame seal colony, and offered a sighting of an eagle’s nest.

Garinish Island extends to 15 hectares (37 acres) and is also known by the alternative names of Garnish Island, Ilnacullin and Illaunacullin (‘island of holly’). 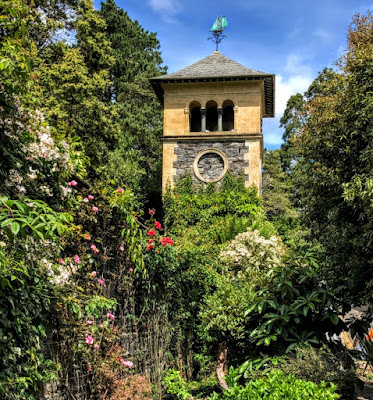 The clock tower in the walled gardens on Garinish Island (Photograph: Patrick Comerford, 2021)

The gardens on Garnish Island flourish in the mild humid micro-climate of Glengarriff harbour. This is an island garden of rare beauty, assisted by a mainly pine shelter belt, and known to horticulturists and lovers of trees and shrubs around the world.

The gardens were designed by the architect and garden designer Harold Peto (1854-1933) for the island’s owners, John Annan Bryce, (1841–1923) a Belfast-born Scottish politician who bought the island from the War Office in 1910, and his wife Violet L’Estrange.

Peto and Bryce were a creative partnership, so that the island remains renowned for its richness of plant form and colour, changing continuously with the seasons. 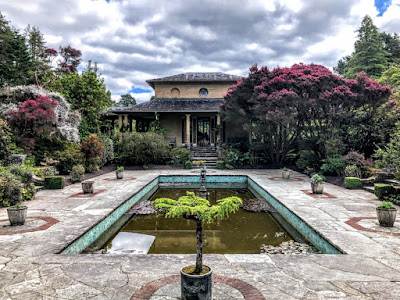 Annan and Violet Bryce were convinced that with its sheltered situation and the warming influence of the Gulf Stream, a wide range of oriental and southern hemisphere plants could flourish in the almost subtropical climate of Glengarriff.

Keenly interested in horticulture and architecture, the Bryces planned to build a mansion and lay out an extensive garden on the island, and commissioned Harold Peto to design these. 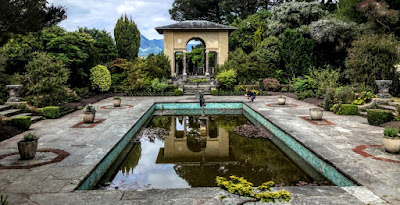 The Italian Garden is, perhaps, the outstanding feature of Garinish. Here, Peto’s genius, combined with Annan Bryce’s ideas and resources, resulted in the creation of a formal architectural garden that blends with its natural setting.

Pathways wind around the landscape, leading to the fascinating garden buildings and architectural features, including an Italian tea-house or Casita of Bath stone with colonnades, a formal pool, an Italian pavilion with columns of Rosso Antico of a beautiful red colour, a Grecian Temple, marble slabs from Carrara, the Island of Skyros and Connemara, a clock tower, the casita and the Martello Tower. 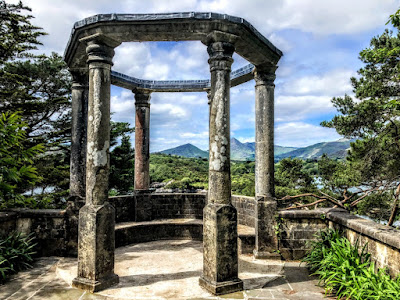 The Grecian Temple overlooks the sea and the Caha Mountains (Photograph: Patrick Comerford, 2021)


Plans for a mansion were prepared incorporating the Martello Tower, but it was never built. Instead, Bryce House, an extensive cottage, became the home of the Bryce family.

Among their guests were the writers George Bernard Shaw, who stayed on the island in 1923 while writing his play, Saint Joan, the poet Æ George Russell, and Agatha Christie.

Bryce House is presented as it would have appeared during their lifetime. A selection from their vast collection of important paintings, prints, drawings, and books is on display. A theme throughout the house is the winged lion of Saint Mark, the symbol of Venice.

The Martello tower on the island dates from the time of the Napoleonic Wars. Like other towers in Cork – but unlike other Irish Martello towers – it has a straight cylindrical shape that does not splay out at its base. 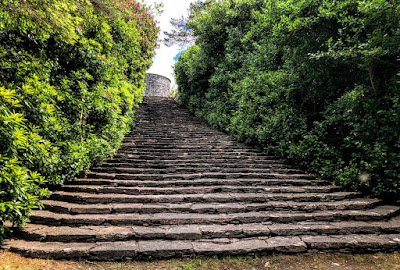 The steps leading up to the Martello Tower (Photograph: Patrick Comerford, 2021)

The island is renowned for its richness of plant form and colour, changing continuously with the seasons.

The vivid colours of Rhododendrons and Azaleas reach their peak in May and June, while hundreds of cultivars of climbing plants, herbaceous perennials and choice shrubs dominate the midsummer period from June to August.

Autumn colour, particularly on the magnificent heather bank, is rich during the usually mild autumn months of September and October. 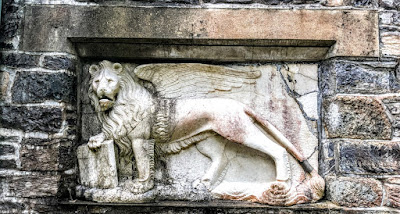 A theme throughout Bryce House is the winged lion of Saint Mark, the symbol of Venice (Photograph: Patrick Comerford, 2021)

Annan Bryce died in 1923, but his widow Violet continued to development the gardens. Their son, Rowland Bryce, took over this work in 1932, continuing to add interesting plants from many parts of the world. He was assisted by Murdo Mackenzie, an outstanding Scottish gardener.

When Roland Bryce died in 1953, he bequeathed Garinish Island to the Irish people. Murdo Mackenzie remained in charge of the garden when it passed into public ownership until his retirement in 1971. Today, the island is managed by the Office of Public Works.

The Office of Public Works normally charges for admission on arrival at the island. This charge is separate from the fares collected by boat owners. 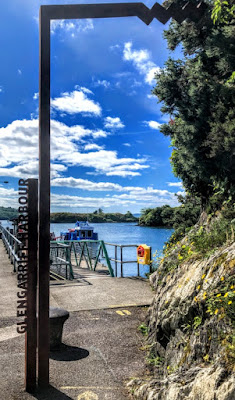