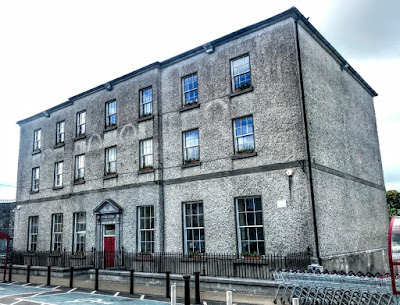 I was in Tuam, Co Galway, for a funeral late yesterday evening [26 May 2019]. Two of us parked in the grounds of the Roman Catholic Cathedral of the Assumption, and we had a few hours to explore the town with its square and Town Hall, the two cathedrals, some of the early church sites.

The Palace is a detached seven-bay, three-storey over basement Georgian palace, with a three-bay entrance breakfront. It was built by Archbishop Edward Synge (1716-1741) and remodelled in 1823 by Archbishop Power Le Poer Trench.

Although this is a Georgian house, its plain upright exterior suggests a link almost as close to the tower houses of earlier centuries as to the Palladian mansions that soon followed, such as the former Bishop’s Palaces on Church Street and Henry Street in Limerick.

Yet, the Palace in Tuam is a very handsome and substantial building, and was once the largest mansion in Tuam – larger even than the ruined castle of the mediaeval High Kings of Ireland.

The house is essentially from the first half of the 18th century but it was remodelled and given its present doorway in the first decades of the 19th century. Its large scale and formal design, with good limestone detailing, is typical of important religious residences.

Synge argued for religious toleration and believed Roman Catholics and Dissenters should not be prosecuted. A renowned preacher, many of his works were published. The Synge family was a dynasty of prominent church and literary figures that included the archbishop’s sons, Edward Synge (1691-1762), Bishop of Clonfert and Kilmacduagh (1730-1732), Bishop of Cloyne (1732-1734), Bishop of Ferns and Leighlin (1734-1740) and Bishop of Elphin (1740-1762), and Nicholas Synge, Bishop of Killaloe and Kilfenora (1752-1771), as well as the playwright John Millington Synge (1871-1909).

Trench was the second son of William Trench, 1st Earl of Clancarty, and a younger brother of Richard Trench, 2nd Earl of Clancarty. He was born in Sackville Street (now O’Connell Street), Dublin, on 10 June 1770, was educated at Harrow and Trinity College, Dublin, and was ordained deacon in 1791 and priest in 1792.

After ordination, he continued as the agent on his father’s vast estates centres on Ballinasloe, Co Galway. During the 1798 Rising, he was a captain in the yeomanry raised by his father to fight against the General Humbert’s invading French army.

Trench actively promoted a vigorous evangelical movement in Connacht known as the ‘Second Reformation.’ From 1818 until he died, Trench was president of the Irish Society. He strongly opposed the mixed system of national education and was one of the founders of the Church Education Society. 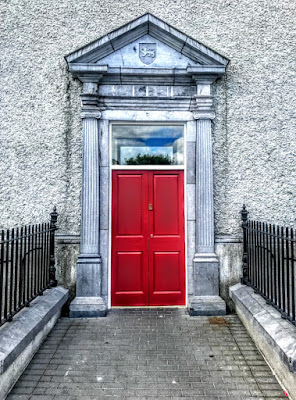 The carved limestone doorcase of the former Palace in Tuam has a correctly detailed Ionic order with fluted pilasters (Photograph: Patrick Comerford, 2019)

The Palace is said to have been built on the site of the castle fosse, and the castle ruins were quarried exhaustively for building material – a common practice in Georgian times.

The front entrance is approached by a limestone bridge across a basement area that is wide and deep enough to allow the basement rooms to be well lit. The basement area is protected by iron railings with classical piers that have urns and simple spiked railings in between.

The carved limestone doorcase has a correctly detailed Ionic order with fluted pilasters on high bases supporting a detailed entablature and open-bed pediment with the Trench coat-of-arms in the tympanum. The double-leaf timber door has raised and fielded panels.

The rear elevation mirrors the front but without an entrance doorway. There are car parks to the front, rear and east side of building. It has a hipped slate roof with an eaves course and cast-iron rainwater goods.

The rapid development of architectural styles in the 18th century explains why s early as 1787 the architect and geographer, the Revd Daniel Beaufort (1739-1821) of Collon, Co Louth, described the Palace as ‘old-fashioned and ill-contrived.’

But half a century later, and more than a decade after the Palace was remodelled by Archbishop Trench, Samuel Lewis described the Palace as ‘large and handsomely built, though not possessing much architectural embellishment.’

However, it seems Lewis did not see that interiors of the Palace, dating from 1823, including the magnificent stucco ceilings.

The Palace was the official residence of the Archbishop of Tuam, whose diocese was then the largest in Ireland. It was also his administrative centre for rents, tithes and a consistorial court that adjudicated on wills, marriages, deeds and other matters handled by church courts.

This was the manor house at the centre of a large church demesne that included most of the town of Tuam and its surrounding districts. The demesne, first laid out by Archbishop Edward Synge, was once enclosed by elegant high walls and included gardens, stables and farmyard buildings.

The Palace grounds on the north-east side of the palace were laid out in a style associated in England with Capability Brown, with parklands, trees and walks. In 1844, the park was said to ‘add considerably to the appearance of the town.’

But five years earlier, on the death of Archbishop Le Poer Trench in 1839, the Ecclesiastical Province of Tuam lost its metropolitan status and became the united Diocese of Tuam, Killala and Achonry within the Province of Armagh.

By the time of the disestablishment of the Church of Ireland in 1869, many of the civil and legal functions of the Church had been transferred to the state.

The Palace was sold by the Church in 1950, and in 1951 the palace demesne was acquired by Galway County Council and broken up. Only the Palace, the quadrangular stables and the Palace grounds are recognisable survivals.

The Palace is clearly visible from the drive in front of the Cathedral of the Assumption, but the vista is marred by the supermarket car park between the two, and at ground level each side of the palace is often hidden behind stacked racks of supermarket trolleys. 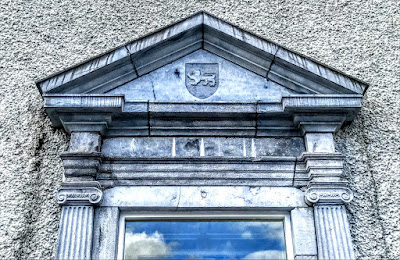 The Trench coat-of-arms in the tympanum above the doorcase of the former Palace in Tuam (Photograph: Patrick Comerford, 2019)

Many thanks for an informative article. The Syngs left a mark on many parts of Ireland. One of them, Alexander spent some years on the Aran Islands. He was a fine seaman and showed great courage once when rescuing some shipwrecked sails off Balbriggan I think.
Here is a link to a short piece about his church in Kilronan, now sadly derelict.
https://m.facebook.com/oldcourthousearan/posts/603994626381723/?_rdr

Just a small niggle, and probably something of which you are well aware, but though the Act for the Disestablishment of the Church of Ireland was passed in 1869 (as the Irish Church Act 1869 [32 & 33 Vict. c. 42]), it was not effective until 1 January 1871, so the date you list may lead some to misinterpret you as meaning, on the face of it, effectiveness from, say, 1 January 1869.

The last of the "elegant high walls" and some of the old trees were destroyed by a local developer to the annoyance of some towns people, hence this court case. https://ie.vlex.com/vid/concepta-goss-and-others-793652957