Temple Jarlath: a direct link
with Saint Jarlath of Tuam 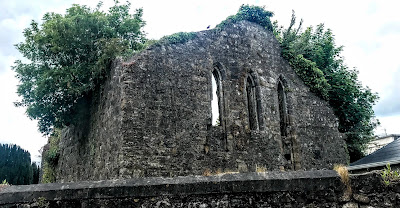 Temple Jarlath on High Street is said to mark the site of the earliest monastic settlement established by Saint Jarlath in Tuam (Photograph: Patrick Comerford, 2019)

Tuam in Co Galway owes its origins to Saint Jarlath or Saint Iarlaithe mac Loga, a sixth century priest and scholar who is celebrated as the founder of the monastic School of Tuam and he is patron saint of the Archdiocese of Tuam.

The four main ecclesiastical sites in Tuam are Saint Mary’s Cathedral on High Street, at the end of the west town, Temple Jarlath, which is nearby, and the former episcopal palace, the Roman Catholic Cathedral of the Assumption and its campus of church buildings and schools at the east end of the town.

Although Tuam traces its origins as a church and diocese to Saint Jarlath, there is no surviving mediaeval life of the saint. The main sources are references in early genealogies, martyrologies, the lives of Saint Brendan of Clonfert, and a 17th century biography compiled by the Franciscan scholar John Colgan.

Jarlath of Tuam is said to have belonged to the Conmhaícne, the ruling family in the greater part of what would become the parish of Tuam. The other Iarlaithe is said to have belonged to the Dál Fiatach in east Ulster. He is identified as the third Bishop of Armagh, succeeding Saint Patrick’s heir Benignus, and the Annals of Ulster and Innisfallen record his death in the year 481.

In John Colgan’s memoir of Saint Jarlath in his Acta Sanctorum Hiberniae (1645), Jarlath is said to have studied at Kilbennen under Saint Benignus, a disciple of Saint Patrick.

Later, he founded his first monastery at Cluainfois (Cloonfush), near Tuam. His monastic school is said to have attracted scholars from throughout Ireland, including Saint Brendan of Ardfert and Saint Colman of Cloyne. Despite his fame, Jarlath left Cloonfush to study under Saint Enda of Aran around 495.

In the mediaeval Irish Lives of Saint Brendan of Clonfert, Saint Brendan is said to have visited Connacht to study under Saint Jarlath. One day, when Jarlath was in his old age, Brendan advised his mentor to leave the school: ‘Go and where your chariot wheels break, there shall be the site of your new monastery and the place of your resurrection.’

Jarlath’s travels did not take him very far: he had travelled 4 km east when the shafts of his chariot broke at Tuaim da Ghualann (‘Mound of two shoulders’), the site of present-day Tuam, ca 526-527. There Jarlath died, ‘full of days,’ on 26 December ca 540, aged about 90. 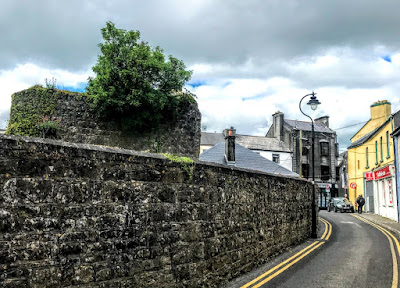 The curving enclosure wall to the east along Church Lane and to the south along Sawpit Lane probably preserves the line of an earlier ecclesiastical enclosure (Photograph: Patrick Comerford, 2019)

Temple Jarlath on High Street is said to mark the site of the earliest monastic settlement established by Saint Jarlath in Tuam. However, the Vikings may have plundered this foundation, and little is known about Saint Jarlath or his early church, although it survived in some form into the 11th century.

The exact location of the saint’s original foundation is not clear. The proliferation of religious houses and ecclesiastical foundations in the town under the patronage of the O’Connors of Connacht adds to this confusion and uncertainty.

According to the Archaeological Survey of Ireland, the curving enclosure wall to the east along Church Lane and to the south along Sawpit Lane probably preserves the line of an earlier ecclesiastical enclosure.

Tony Claffey, author of the Tuam Historic Towns Atlas, believes that the site of Temple Jarlath was probably chosen for a re-established settlement built by Áed Ua Conchobair (O’Connor), or ‘Áed of the gapped spear’ in the 11th century.

King Turlough O’Connor extended the site at Temple Jarlath westwards to provide space for the new Saint Mary’s Cathedral. Despite the legends and the myths, Tuam only became the principal see in Connacht only at the Synod of Kells-Mellifont in 1152, while Annaghdown became an independent diocese at the Synod of Dublin in 1192.

But the ruins in the enclosure at Temple Jarlath are of a much later date. They include the ruins of a late 13th century parish church with a fine pointed triple light transitional east window and a later tower to the west, all on the east side of a raised, D-shaped graveyard. A late mediaeval tower stands at the west end of the church.

Following the Reformation, the church at Temple Jarlath was neglected and fell into ruins. However, it as used as the Roman Catholic parish church of the town until a new church was built in Chapel Lane in 1783. The 18th century O’Connor Donellan chapel is attached to the north wall. The surrounding churchyard continued to be used as the town graveyard until it was been closed for burials in 1885. 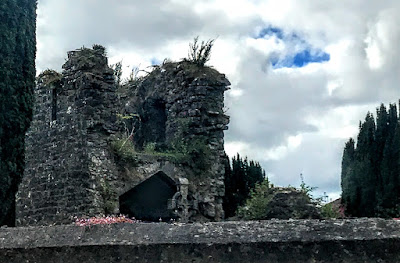 A late mediaeval tower stands at the west end of the church (Photograph: Patrick Comerford, 2019)

A large steel and wooden tower has been built on High Street to enable access to the ruined church and graveyard. However, although a sign says the site is opened daily during the summer months, it was locked when I visited on Sunday afternoon. The sign said contact details for the caretaker were available through the Galway County Council offices ‘across the road’ … but it was Sunday, and they were closed too, of course.

Today, depending on your point of view, the graveyard and church look abandoned or like a haven of peace in the heart of the town, with its lines of large yew trees and worn gravel paths.

Saint Jarlath’s feast day is celebrated on 6 June, the date of the translation of his relics to a church specially built in his honour at the east end of Tuam. There, at Teampal na Scríne or the Church of the Shrine, his remains were encased in a silver shrine, and the church became a perpetual vicarage united to the Prebend of Kilmainemore in 1415.

It is said that the relics of Saint Jarlath were hidden after the Reformation but were unearthed by workers threshing corn in 1625. Later, Loughlin O’Connor and his descendants of Kilclooney, Tuam, were appointed custodians of the relics. They remained in the possession of this family ‘until 1831, when they disappeared and were never recovered.’

Saint Jarlath’s broken wheel has become the heraldic symbol of Tuam, and is used by many local organisations, including Tuam Town Council. 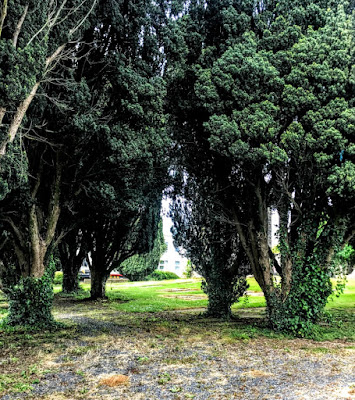 The graveyard looks like a haven of peace in the heart of the town, with its lines of large yew trees and worn gravel paths (Photograph: Patrick Comerford, 2019)

It a wonderful place..soo much tradition. Please protect.