Two Palladian houses, including
a palace, in Georgian Limerick 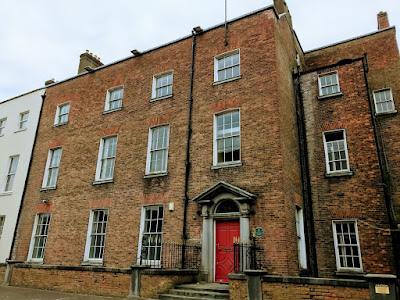 The former Bishop’s Palace on Henry Street, Limerick … one of a pair of Palladian-style houses (Photograph: Patrick Comerford, 2017)

As I made my way between two buses yesterday [10 February 2017] – from the coach from Dublin to Limerick to the bus from Limerick to Askeaton – I walked along Henry Street and admired the many green plaques that have been placed on the sites of historic buildings by the Limerick Civic Trust.

Henry Street runs parallel to the River Shannon (to the west) and O’Connell Street (to the east) and is named after Edmund Henry Pery (1758-1844), the first Earl of Limerick.

Henry Street was part of the plans of his uncle, Edmund Sexton Pery, for Newtown Pery. However, much of the street remained undeveloped in comparison to other areas of Limerick at that time.

At either end of Henry street are two interesting church buildings: the Franciscan Church is a fine imposing classical building near the junction with Bedford Row, but is now closed. The former Presbyterian Church stood at the junction with Mallow Street, but was converted into offices many years ago.

Other buildings of note on Henry Street include the former General Post Office and the modern five-star Savoy Hotel, which stands on the site of the old illustrious 1,000-seater Savoy Theatre that occupied the block between Bedford Row and Shannon Street.

But the two buildings that really caught my eye on Friday were two Georgian neighbouring houses built as townhouses for Edmond Sexton Pery (1719-1806), 1st Viscount Pery. They offer a dignified and imposing presence on the street, despite the fact that its character has been eroded in recent years.

Edmund Sexton Pery was born into one of the most politically influential families in Limerick and was the Speaker of the Irish House of Commons from 1771 to 1785. He lived in what is now Hibernian House at No 103 Henry Street, and the house next door was built for his brother, William Cecil Pery (1721-1794), Church of Ireland Bishop of Limerick, who made this the Bishop’s Palace. 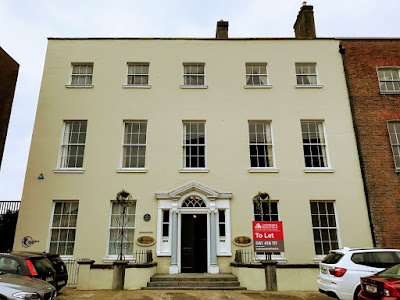 Hibernian House, or No 103 Henry Street, is an attached, five-bay, three-storey over basement house, built ca 1780. It is distinguished by the pedimented doorcase to the front and two full-height three-sided bow projections to the rear.

The house has a walled front site basement area and is set back from the street with a parking area where there was once a front garden.

There is a hipped artificial slate roof with a shared rendered chimneystack to the north party wall, with clay pots and a smaller central stack. There is a cast-iron downpipe to the front, and shared plastic rainwater goods to the rear.

The house has ruled and lined rendered walls with limestone coping to the front parapet wall. The square-headed window openings with limestone sills have carved nosed details. Throughout the building, the original windows have been replaced with modern timber sash windows. 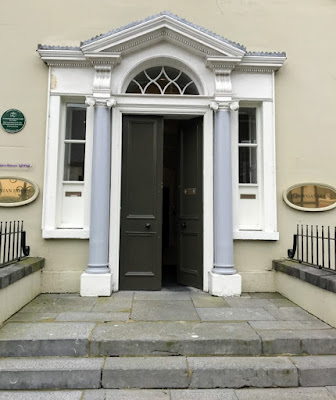 The centrally-placed tripartite aediculated doorcase is made up of three-quarter engaged Scamozzian Ionic columns supporting inverted S-scrolls which are surmounted by a broken base triangular pediment, into which the round-arched fanlight rises. There is a double-leaf panelled timber door leaf and Gothicised glazing bars to the fanlight above, and dentil enriched entablature to the sides over glazed sidelights.

The door opens onto a limestone platform and three steps, flanked by a rendered wall with limestone coping the bridges the basement area and continues to enclose the basement. A pair of limestone piers support wrought-iron lanterns.

Concrete steps lead to the basement area, where there are limestone flagstones and a door opening with a glazed timber door. The house has boundary walls of limestone ashlar at the rear of the site.

Over the years, the exterior of this large Georgian house has been much altered, but the house retains many of its original interior features, including the original dog-leg staircase with a finely turned balustrade on pear-shaped bases, and newels made up of a grouping of eight balusters. 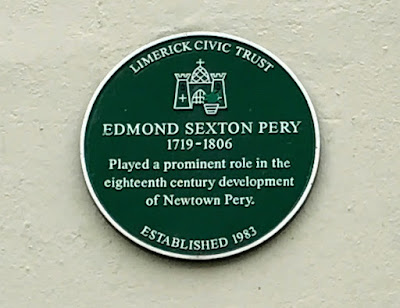 In his book, Limerick City: an architectural guide, CM Murphy says this house and the Bishop’s Palace next door were designed as a pair by the architect and portrait painter Francis Bindon.

Francis Bindon was a son of David Bindon, MP for Ennis. His brother Samuel Bindon was an uncle by marriage of the architect Edward Lovett Pearce.

Bindon studied painting and architecture during his travels in Italy and elsewhere, especially in Padua. He lived in Dublin, but held some family property in Co Limerick in Co Clare. He became MP for Ennis in 1761, and was made a Freeman of the City of Limerick in 1762. He died in 1765.

The interior plasterwork is probably the work of the great Dublin-born stucco master Michael Stapleton (1747-1801). 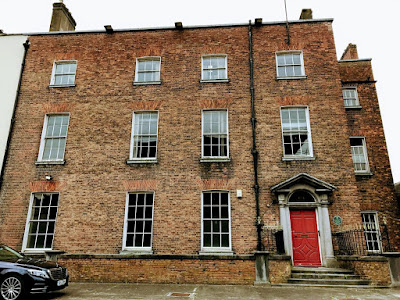 Edmond Sexton Pery’s brother, Bishop William Cecil Pery (1721-1794), lived next door in the Bishop’s Palace at No 104 Henry Street. The bishop was Dean of Derry (1780-1781) and Bishop of Killala and Achonry (1781-1784) before becoming Bishop of Limerick, Ardfert and Aghadoe (1784-1794). He was made a peer with the title of Baron Glentworth of Mallow in 1790. William Street, Cecil Street, Glentworth Street and Mallow Street in Limerick are all named in his honour.

When he died in 1794, his title passed to his son, Edmund Henry Pery (1758-1844), who later became the 1st Earl of Limerick. His daughter, the Hon Eleanor Pery, married Sir Vere Hunt, MP for Askeaton at the of the Act of Union.

The former Bishop’s Palace at No 104 Henry Street is an attached, four-bay, three-storey over basement red brick house, built ca 1775.

This house has a fine broken base pedimented doorcase to the northern-most bay and a single-bay recessed elevation to the north, which is flush with the five-bay rear elevation.

There is a multiple-bay, two-storey range of outbuildings attached to the north, advancing eastward to form one side of a Palladian forecourt.

The M-profile hipped artificial slate roof is concealed behind a parapet wall. A lean-to roof to the later annex is attached to the recessed elevation to the north. There is hipped and gabled roof to the stable range. There are rendered and red brick chimneystacks to the main roof, rising from the ridge of gabled north elevations or the party wall to the south. There are plain clay pots, and it seems the valley pitches were removed to accommodate attic rooms.

The red brick walls are laid in Flemish bond throughout, with cement repointing. There is limestone coping to the parapet walls. There are squared and snecked tooled limestone ashlar basement elevations to the front and the rear.

The camber-arched window openings have fine rubbed brick arches, although these are obscured by crude cement pointing, there are rendered reveals, painted limestone sills with nosed detail, and replacement timber sash windows.

There are two round-arched window openings to the rear elevation with Gothic-style fanlights.

The limestone Doric doorcase has three-quarters engaged columns joined by a lintel architrave, and is surmounted by a broken base triangular pediment with full Doric entablature treatment above the columns. There are mutules to the soffit of the pediment. It is worth noting the plain fanlight and the raised and fielded panelled timber door with a geometric pattern to its lower section.

The limestone steps to the limestone flagged front door area are flanked by red brick plinth walls surmounted by wrought-iron railings that return with graceful curves to enclose the front site basement area.

These railings come to an end over limestone piers that are integrated with the plinth wall and surmounted by wrought-iron lamp standard bases.

Two flights of limestone steps – one leading to the stair hall of the main house, the other leading to the range of outbuildings – are attached to the rear elevation at the basement level with red brick elevations that have arched recesses and wrought-iron railings on limestone copings.

The basement area is reached by a flight of steps built against the basement elevation of the range of outbuildings to the north. There is a cobblestone floor, and stone-flagged basement area to the south.

There is a range of squared rubble limestone outbuildings to the north attached to the house and addressing the rear elevation of the house with a single-storey over basement red brick elevation with parapet wall.

The gabled front elevation of the house is east-facing and of limestone ashlar. It has multiple window openings, both original and forming later alterations, and the original wooden windows have been replaced with glazing.

The three centred red-brick arches are now blocked-up to form door and window openings. Although the house was closed yesterday and seems to be empty, I understand that many of the original internal details survive, including the primary and secondary staircase, lugged and kneed door architraves and raised and fielded panelled timber doors. There is a heavy running mould cornice to the stair hall with a hand-modelled ceiling rose. 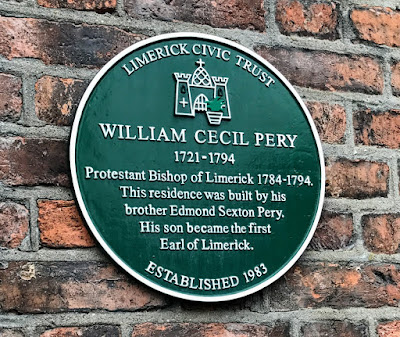 These two houses are among the grandest and most formally realised townhouse pair built according to a Palladian concept of the flanking range of outbuildings. The quality of the pedimented limestone Doric doorcase and the rubbed brick arches distinguish the former Bishop’s Palace. The use of camber arches at the end of the 18th century is a regional continuation of a tradition that had long since died out in Dublin.

In recent years, Henry Street has seen some investment, especially in comparison to other Limerick streets, and many new high rise office blocks and apartments have been built along the street. But these two houses are Georgian gems and reminders of the grandeur that is part of Limerick’s architectural heritage.