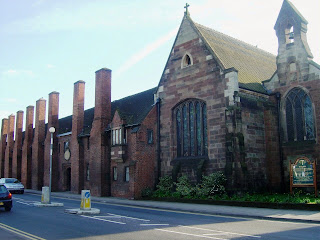 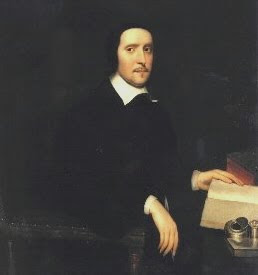 I am very grateful to Father Roger [Canon Roger Williams, SSC, Master of Saint John’s Hospital] for asking me to share a few words this morning, as we remember in the calendar of the Church – even if we have moved him forward by a day – the saintly Jeremy Taylor (right, one of the key bishops in the restoration of the Church of Ireland after the ravages and spoliations of the mid-17th century.

Although Dublin is only a 40-minute plane hop and a 40-minute train journey from Lichfield, the Church of Ireland may be many hundreds of miles away for many people in Lichfield, even today.

Yet this has always been a precious place to me … both Lichfield as a city, and Saint John’s itself.

When I was in my late teens, I first came to Lichfield almost 40 years ago, because of distant family connections with the Comberford family of Comberford, halfway between Lichfield and Tamworth.

I have happy memories of how I began working as a freelance journalist here, with the occasional contribution to the Lichfield Mercury.

One summer’s evening in 1971, when I was staying on Birmingham Road, on an evening just like yesterday’s, I found myself passing by Saint John’s. Some would say by accident, others would say by divine providence, I decided to look into this very building.

It was more than a decade before John Piper’s window was placed here.

And yet on that bright, warm summer’s evening, I was truly filled – physically, emotionally and spiritually – with the light, the life and the love of God.

How was I to respond to that experience? I immediately made my way, passing the Lichfield Mercury’s offices in Beacon Street, up to the cathedral, and slipped into the choir stalls for choral evensong. One of the canons asked me that evening had I started going to church because I was thinking of ordination.

I suppose I was. It was the beginning of a long journey, a long pilgrimage, and I come back here regularly to remind myself of how that journey, that pilgrimage, began, and to give thanks to God for his call to me, for waking me up, for calling me into his life, his love and his light.

And over the past – well almost – forty years, I have given thanks for the particular tradition of this church, which has been very relevant as I developed my sense of calling to ministry and mission.

Archbishop Henry McAdoo, a former Archbishop of Dublin and a one-time co-chair of ARCIC, the Anglican-Roman Catholic International Commission, once claimed that the second phase of the Anglo-Catholic movement, that part of the movement that we associate with Charles Gore, and later with figures such as Percy Dearmer, owed more to Jeremy Taylor and the Caroline Divines than to John Henry Newman and the Oxford Movement.

Whether it did or not may be irrelevant. But the Jeremy Taylor and the Caroline Divines remain very relevant today. During the English Civil War, Jeremy Taylor suffered internal exile and persecution, but remained true to the essentials of his Anglicanism, worshipping daily according to the tradition of the Book of Common Prayer.

With the end of the Cromwellian era, Jeremy Taylor and Archbishop John Bramhall moved immediately to restore the Anglican tradition within the Church of Ireland. They revised and updated the Book of Common Prayer. They restored catholic order to the worship, liturgy and organisation of the Church of Ireland. They saw to providing priests for parishes that had long been vacant, and to consecrating bishops for vacant sees – indeed Jeremy Taylor had the singular honour of being asked to preach at his own consecration.

He moved to the north-east of Ireland, taking responsibility as bishop for the three dioceses of Down, Conor and Dromore. This is a vast swathe of the Church of Ireland today – from Rathlin island between the coasts of Antrim and Scotland, through what is now Belfast, south to the shores of Co Down, where, in words of Percy French, the Mountains of Mourne sweep down to the sea.

He restored and rebuilt cathedrals, he visited his parishes, and he provided a model for how to combine sacramental and pastoral care for people with missionary foresight and vision.

Yet he never neglected the deeper spiritual truths. His two best known works, Holy Living and Holy Dying, are precisely that – models for how to live and how to die in faith in Christ.

Jeremy Taylor died regretting that he had never been called back as bishop to an English diocese. But I am constantly grateful for his contribution to the life and the spiritual depths of the Church of Ireland … just as I am always grateful to Saint John’s for its place in looking after my own Holy Living and, eventually, Holy Dying.

And now may all our thoughts, words and deed be to the praise, honour and glory of God, + Father, Son and Holy Spirit, Amen.

Canon Patrick Comerford is Director of Spiritual Formation, the Church of Ireland Theological Institute, Dublin. This sermon was preached at the Eucharist in the Chapel of Saint John the Baptist in Saint John’s Hospital without the Barrs, John Street, Lichfield, on Wednesday 12 August 2009.

Posted by Patrick Comerford at 12:08