Restoring children’s rights to our children 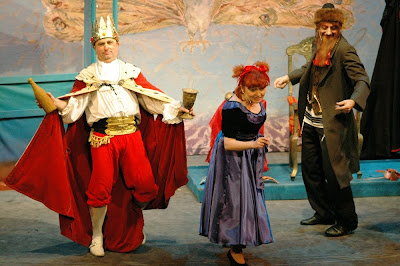 A Purim performance in the Jewish Theatre in Warsaw (Photograph: Henryk Kotowski, 2009)

Collect, Readings and Post-Communion Prayer for the 17th Sunday after Trinity:

When I was discussing the readings for this evening with [the Revd] Paddy [McGlinchey] last week, as he planned for this Eucharist, I joked that I was going to preach from a phrase in the Epistle reading that reminds us: “Elijah ... prayed fervently that it might not rain, and for three years and six months it did not rain on the earth.”

After the poor summer we have had in Ireland this year, it is fine to make childish jokes about passages like this in Scripture.

Indeed, our first reading this evening is one that creates entertaining and rowdy occasions in synagogues to this day.

As the story of Esther is read at the festival of Purim, which usually falls in March [8 March 2012, 24 February 2013], a month before Passover, the synagogue is crowded with men, women, and children, the adults wearing their best Sabbath clothes, and many children, and some adults too, dressed up in colourful costumes, funny beards and masks. Children in particular enjoy dressing up as the characters in the Book of Esther, including King Xerxes, the banished queen Vashti, Queen Esther, her cousin Mordecai and the evil, scheming Haman.

In some communities, I think, they still burn an effigy of Haman. So Purim is Hallowe’en, Carnival, Mardi Gras and Guy Fawkes Night ... all rolled into one, and usually focussed on children.

The Megillah or Scroll of Esther, as you know, is the only book in the Bible not to mention God’s name. We were reading it last week at Morning Prayer – which somehow seemed out of place during the Jewish New Year and Yom Kippur. You may remember how it tells the story of the villain Haman who plots the genocide of the Jews in Persia.

Whenever his name is mentioned during the reading, everyone in the synagogue boos and hisses and stamps their feet, and makes a racket with graggers or rattles and cymbals.

The purpose of all this fun is to blot out the name of Haman. Originally, when his name was read, the congregation would shout “Cursed be Haman,” or “May the name of the wicked rot!”

Any noise will do, and it is a mitzvah that Jewish people should eat, drink and be merry at Purim. According to the Talmud, a person is required to drink until they cannot tell the difference between “Cursed be Haman” and “Blessed be Mordecai” ... although opinions differ as to exactly how drunk that is.

If you were not here on Friday morning, you were left hanging, perhaps wondering whatever happened in the end. And this evening we have the end of the story: Haman the villain is hanged on the gallows he built for Mordecai, and Mordecai is given Haman’s job.

I often wonder how this story was read by Jews during the horrors of the Holocaust, how they could possibly have sung the words of our Psalm this evening:

But this story of Xerxes and Esther, Mordecai and Haman, is not relevant for Jews alone today. It is a story that reminds us constantly, with or without reference to God, that there are always people who plan and plot evil on a grand scale, happy to wallow in the misery and deaths of millions, men, women and children.

The fate of Haman – and of the 70,000 Persians over the course of three days – may seem severe and unconscionable by today’s standards. But it is not their executions, but the plans they sought to execute that faithful Jews are asked to call to mind at Purim.

For those of you with young children, I am sure you try to protect them from stories of evil and genocide, and try to fill their lives with appropriate but fun-filled and joyous occasions.

But while Haman and Hitler planned and plotted on a grand scale, there are always people who plot and plan evil and the destruction of innocence on varying scales of intensity and application. And we should never either under-estimate the capacity for people to do evil or undervalue the importance of our contribution to protecting the vulnerable, the frightened and the victimised children in our society today.

I was taken aback a week or two ago by a report from a refugee camp in Jordan. The reporter had been interviewing a young Syrian girl, who interrupted to resist being called a child. She could only have been 10 or 12 in age, but she pointed out that she had grown up in recent weeks, and was now an adult responsible for the young children in her family, living without their parents.

Save the Children published a report last week [Untold Atrocities: The Stories of Syria’s Children] describing how refugee children in Jordan have been abused, tortured and traumatised before fleeing Syria:

• A six-year-old boy who was tortured and denied water and food for three days until he died.
• A teenager who had cigarettes stubbed out on his body while he was suspended by his wrists from the ceiling of the school where his father was the principal.

In Dublin, in recent weeks we have seen fathers being shot dead in front of their children, on the streets and in their homes, as criminal gangs and dissident Republicans engage in a vicious violent feud, regardless of the traumatisation of children who left helpless on the scene.

We all despise the activities of these gangs. But all children caught in these situations are innocent. There is no such thing as a child being the wrong person in the wrong place at the wrong time. All children should feel safe, in all places, at all times.

And that is a truth that at the heart of the debate in the Republic of Ireland leading up to a Constitutional Referendum next month [Saturday 10 November 2012].

Launching “Yes for Children,” a national campaign on the amendment, the former Supreme Court Justice, Catherine McGuinness – a former assessor for the Dublin and Glendalough Diocesan Synod and a parishioner in Kill o’ the Grange – described the referendum as an “opportunity to ensure this generation, and future generations, of children are better protected, respected and heard.”

Through this referendum, hopefully, we can:

• provide the best legal protection for vulnerable children and support for families;
• allow 2,000 or so children in long-term state care to be adopted, with a second chance of a loving, stable and permanent family;
• ensure the best interests and views of children are part of decisions made by child care and family law courts;
• set out how we value children in this society.

And yet, until Archbishop Diarmuid Martin preached at a service to mark the beginning of the Law Term on Monday, there had been silence from the Churches about this referendum.

Last Wednesday [26 September] in the Dáil, the Minister for Finance, Michael Noonan, was speaking on legislation to enable this referendum and said that “so far the Roman Catholic Church has been silent, and the other churches have not yet come out on it.”

He added: “I would like if the churches made a clear statement at an early date indicating that they favoured this referendum.”

As the Dáil passed all stages of the legislation the following evening, a Labour backbench TD, Anne Ferris (Wicklow), described as “disturbing” the silence of the Churches on the children’s rights referendum.

Children’s rights organisations have been campaigning for this referendum for nearly 20 years. And the Churches cannot, must not, be silent when it comes to children’s rights.

In Biblical times, children were seen as a guarantee of care and support, a type of pension and care scheme, in a society with little sense of social responsibility. In next Sunday’s Gospel reading (Mark 10: 13-16), Jesus makes a clear statement that children have their own intrinsic and inalienable rights that command personal individual respect, when he chides those who would stop children from approaching him and says with indignation: “Let the little children come to me; do not stop them; for it is to such as these that the kingdom of God belongs. Truly I tell you, whoever does not receive the kingdom of God as a little child will never enter it” (Mark 10: 14-15).

But we need to move from Victorian Sunday School images of the children being brought to Jesus, and ask how he would hear the voices of children today and how he would respond to those who plot to do them harm.

Would he “name and shame” the Hamans of today who plot the end of a child’s childhood, taking away his innocence, her fun, their rights to love and life?

“If any of you put a stumbling-block before one of these little ones who believe in me, it would be better for you if a great millstone were hung around your neck and you were thrown into the sea” (Mark 9: 42).

Archbishop Martin has described the proposed wording for the children’s referendum as a balanced attempt to address rights and obligations, while giving “a new focus on the centrality of the child’s interests.” And yet he was realistic when he warned that a constitutional change alone is not going to be “a magic formula which will resolve all the challenges for parents and children which sadly often emerge in our complex society.” He recognises that “a change of culture” is needed at all “levels of society and public service.”

I am told, and I am confident, that in the coming weeks before the referendum the voice of the Bishops of the Church of Ireland will be strong and clear.

Meanwhile, the story of Esther is a reminder that even when God’s name is not mentioned or invoked, God can act through political decision-making to protect the rights of the vulnerable, the abused and the violated. For, as the Psalmist says, and as we – and all children – should be able to sing:

Canon Patrick Comerford is Lecturer in Anglicanism and Liturgy, the Church of Ireland Theological Institute, and a canon of Christ Church Cathedral, Dublin. This sermon was preached at the Community Eucharist in the institute chapel on 3 October 2012