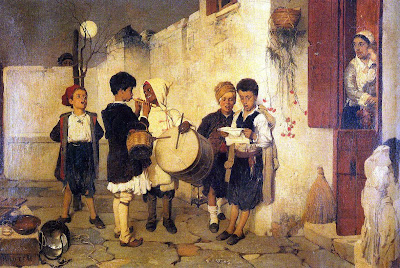 The most acclaimed picture by a Greek painter depicting the Christmas tradition of singing carols is Carols by the 19th-century Greek painter Nikiphoros Lytras, who is regarded as the “Founder and Patriarch” of modern Greek art. This painting is simple in its austerely and is in sensitive manner, heavy with symbolism and with disarming sincerity. It is one of the major works of art depicting Greek life, customs and traditions.

Nikiphoros Lytras (Νικηφόρος Λύτρας, 1832-1904) was born in 1832 in Pyrgos on the Greek island of Tinos, the son of a popular marble sculptor. At the age of 18, he went to Athens to train at the School of Arts, where he studied painting with Ludwing Thierch and Raffaelo Ceccoli. In 1855-1856, he assisted Thiersch in the decoration of the Saviour’s Russian Orthodox Church in Athens.

After Lytras graduated in 1856, he began teaching a course in Elementary Writing. In 1860, he won a Greek government scholarship to the Royal Academy of Fine Arts of Munich, where studied under Karl von Piloty. He was accepted into Piloty’s class after passing the German professor’s stringent requirements. As Piloty’s student, Lytras focused on the history of painting, and his subjects were inspired by Greek mythology and history.

Lytras’s scholarship was danger of coming to an abrupt end in 1862 with the Greek coup that overthrew King Otto. However, after a coup in 1862, King Otto was sent into exile the scholarship came to an end for Lytras, but the Greek Ambassador in Vienna, Simon Sinas, continued to take care of his expenses of his studies.

In the summer of 1865, Lytras met the Greek painter Nikolaos Ghyzis (Νικολάου Γύζη, 1842-1901), in Munich. Ghyzis was also born in Tinos, and together they visited and studied many great European masterpieces.

Later that year, Lytras returned to Greece, and in 1866 he was appointed a professor at the School of Arts in the Technical University in Athens, a position he held until his death. Many of his students, including Georgios Iakovidis (1853-1932), Periklis Pantazis (1849-1888) and Georgios Roilos (1867-1928), became distinguished artists.

In 1873 and for four years he travelled to Smyrna and Asia Minor, Munich and Egypt with his friend Nikolaos Ghyzis.

After his return to Greece, he gave most of his attention to scenes from Greek everyday life and to portrait painting, reflecting the ideology of the ruling class of the time. His most famous portrait is of the royal couple, Otto and Amalia and his best-known landscape is a depiction of the region of Lavrio.

His travels in Minor Asia and Egypt enriched his paintings with dark-skinned children and other elements of Anatolia.

In later life, he founded the ‘Art Group,’ which later exhibited in Paris in 1919 and whose members included the engraver Demetrios Galanis, a friend of Derain, Braque and Picasso and a member of the French Academy.

In the last period of his life, Lytras painted many scenes about aging, loneliness and the fear of death. He was decorated with the Greek Golden Cross of Saviour. After a short illness brought about by inhaling the toxic fumes from the chemicals substances in the colours he used for painting, Nikiphoros Lytras died at the age of 72 on 13 June 1904 in Athens.

He was succeeded at his post by one of his students, Georgios Iakovidis. His son Nikolaos Lytras followed in his footsteps, studying in Munich and heading the School of Art in Athens.

Greek Christmas carols or calanda are a very old custom that remains practically unchanged to this day. Children, in groups of two or more, still go from house to house singing carols, usually accompanied by the triangle or guitars, accordions or harmonicas, knocking on each door and asking: “Shall we say them?”

If the homeowner answers yes, the children sing the carols for several minutes before finishing with the wish: “And for the next year, many happy returns.” In the past, homeowners gave the children holiday sweets and pastries, but today they usually give them some money.

The carols are sung on Christmas Eve, today, New Year’s Eve, and on 5 January, the Eve of Epiphany, and they are different for each holiday.

The word calanda stems from the Latin calenda, which means “the beginning of the month.”

Saint Basil is on his way
And will not deign on us
From Kesaria
You’re a Lady milady.