Feasting and fasting in Lent with
Samuel Johnson in Lichfield 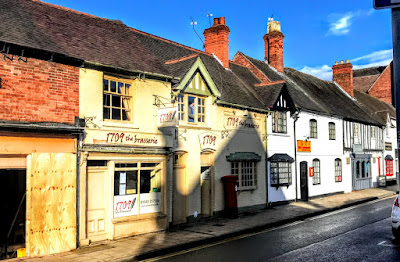 On a bright sunny morning last month, I found myself admiring a row of 18th century, timber-framed houses on Lombard Street, Lichfield.

I soon realised that the name of ‘1709 the Brasserie’ refers not to the date the house was built, still less to the date the restaurant began business. Instead, it refers to Samuel Johnson, Lichfield’s most famous literary figure, was born.

The ‘1709’ at 3-5 Lombard Street is housed in an attractive, mediaeval, timber-framed building, with low beams, creaky floors and timber framed walls. There are chunky wooden tables and chairs and a good mix of contemporary and traditional furnishings.

The proprietors first opened a bistro on this site in 1999 and called it Pastiche Bistro. They sold it in 2005, but they bought it back again in November 2008 and opened in December 2008 as 1709 the brasserie.

The menu is simple and stylish, with an emphasis on locally sourced and homemade produce, and the menus change every four to six weeks.
.
Although the façades of the buildings on this row of houses may date from the 18th and even the 19th centuries, they have earlier timber frames that probably date from the late 16th century.

My Lenten meditations each morning this year are looking at Stations of the Cross in Longford, Millstreet and Lichfield. But some years ago, I reflected each day in Lent on appropriate passages from the writings of Samuel Johnson.

Samuel Johnson bemoaned the fact that the observance of Lent had fallen into neglect in his time, and in Abyssinia he wrote: ‘During the great Lent, they eat neither butter nor milk, not any thing that has had life. They fast all Holy Week upon bread and water; … Thus Lent is observed throughout Abyssinia, men, women and children fasting with great exactness.’

On the other hand, he noted in contrast: ‘Abstinence from lacticinia [milk foods], which included butter, cheese, and eggs, was never strictly enforced in Britain, Ireland and the Scandinavian countries because of the lack of oil and other products that could serve as substitutes.’

Johnson’s diaries show that such fasting was a regular practice for him, including the anniversary of his mother’s death (23 January 1759), during Lent, and from Good Friday until Easter morning. His biographer, James Boswell, notes that Johnson fasted so strictly on Good Friday that ‘he did not even taste bread, and took no milk with his tea; I suppose because it is some kind of animal food.’

So, I wonder what Dr Johnson would make of this fine restaurant in Lichfield that is named after the year of his birth. In his Dictionary, Johnson defines lunch, pleasingly, as being ‘as much food as the hand can hold.’

But even in Lent, this can sound a little meagre.