Following the Stations
of the Cross in Lent 23:
Millstreet 6: Veronica
wipes the face of Jesus 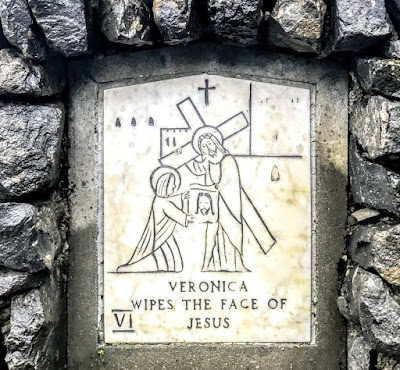 I am continuing my Lenten journey each morning in Lent, when my meditations and reflections are being guided by the Stations of the Cross from three locations.

In the sixth station by Liam Cosgrave in Millstreet, Christ is holding his cross alone, and there is no sign of Simon who helped him to take up the cross in the previous station. Christ is holding the cross with one hand and has used the other to hand her veil back to Veronica, who has fallen to her knees.

This encounter is not recorded in any of the four Gospels, but this is International Women’s Day, and this morning I think of Veronica as a representative of every woman who shows care and compassion in the face of violence and oppression.

A few years later, in 1207, the cloth was publicly paraded for the first time and displayed by Pope Innocent III. This procession, between Saint Peter’s and the Santo Spirito Hospital, became an annual event and the procession inspired Pope Boniface VIII to proclaim the first Jubilee in 1300. For the next 200 years, the ‘Veronica’ was regarded as one of the most precious Christian relics.

Some accounts say the veil was stolen or destroyed after the Sack of Rome in 1527, others say it survived, but it disappears almost entirely from public view after 1629, when the Pope prohibited making reproductions.

But that association of the image of Jesus with Santo Spirito brings back memories of another image of Christ I saw on the steps of Santo Spirito in Rome last year.

The hospital was built for paupers and abandoned children by Pope Innocent III, who began this procession. Two years ago [March 2016], the Canadian sculptor Timothy Schmalz donated a bronze statue on the steps of the hospital showing ‘Christ the Beggar’, sitting on the steps, with the words beside him: ‘Ha avuto fame e mi avete dato da mangiare, ho avuto sete e mi avete dato da bere. I was hungry and you gave me food, I was thirsty and you gave me drink’ (Matthew 25: 35).

A second statue at Santo Spirito shows Christ as an impoverished patient lying on a makeshift bed on the steps of the hospital. The words beneath him read: ‘Ero malato e mi avete visitato. I was ill and you visited me’ (Matthew 25: 36).

The story of the Veil of Veronica challenges us to ask: ‘Where do I see the face of Christ.’

‘Christ the Beggar’ … a sculpture by Timothy Schmalz on the steps of Santo Spirito Hospital in Rome (Photograph: Patrick Comerford, 2017)