Saint Mary’s Cathedral,
Tuam, is the third
cathedral on the site 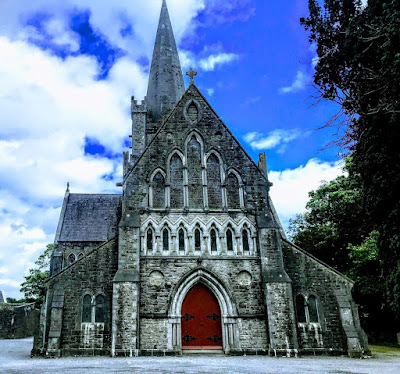 The west front of Saint Mary’s Cathedral, Tuam, Co Galway … the third cathedral on the site, it was designed by Sir Thomas Deane (Photograph: Patrick Comerford, 2019)

The principal ecclesiastical sites in Tuam, Co Galway, include Saint Mary’s Cathedral on High Street, at the west end of the town, Temple Jarlath, which is nearby, and the former episcopal palace, the Roman Catholic Cathedral of the Assumption and its campus of church buildings and schools at the east end of the town.

I was in Tuam on Sunday for a funeral in the Cathedral of the Assumption, and after a cursory visit to Temple Jarlath two of us walked on west to Saint Mary’s, the magnificent Church of Ireland cathedral of the Diocese of Tuam, Killala and Achonry.

From the 12th century until 1839, both before and after the Reformation, this was the seat of the Archbishops of Tuam. Most of the present structure dates from the 1870s, but parts of the earlier 12th and 14th century cathedrals survive on the site.

The founder and first bishop of Tuam is said to be Saint Jarlath, who founded a church here about 501. He is said to have died ca 540-550, but before the 11th century only two other Bishops of Tuam are named: Ferdomnach (died 781) and Eugene mac Clerig (died 969).

The mediaeval importance of Tuam develops only in the 11th century when the O’Connor dynasty of High Kings of Ireland made Tuam their seat, moving there from Rathcroghan, near Tulsk, Co Roscommon. 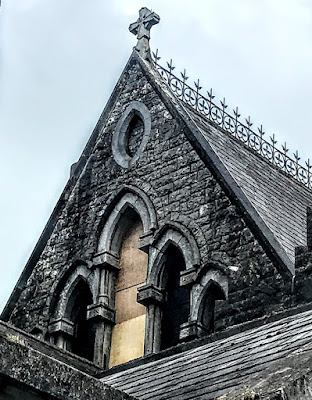 The first cathedral on the present site was built in the 12th century, when Turlough O’Connor (1088-1156) was High King. This marked the establishment of Tuam as the seat of an archbishop following the Synod of Kells of 1152.

This first cathedral collapsed in a fire in 1184, with only the stone chancel arch escaping the fire. The site was abandoned for almost 100 years. A small parish church was built in the 13th century at Temple Jarlath, the site of an old monastery.

A second cathedral was built in the 14th century by the de Burgo family, a little to the east of the original building and incorporating the remains of the 12th century chancel and sanctuary. But this chancel arch was blocked up by a stone-and-wooden structure, with a door in its centre. This structure remained in place for over 500 years, when the chancel arch was exposed to the elements.

When the railway arrived in Tuam in 1860-1861 and the army barracks was enlarged, the Anglican population of Tuam more than doubled from 310 to 640, so that the 14th century cathedral was no longer large enough to accommodate the congregation. This inspired Charles James Seymour, Dean of Tuam, to commission a third cathedral on this site in 1861-1878. 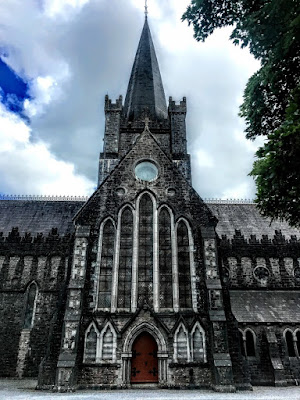 This third cathedral was designed by the architect Sir Thomas Newenham Deane (1828-1899) was born at Dundanion, Co Cork, the eldest son of Thomas Deane and his second wife, Eliza Newenham. He was educated at Rugby and Trinity College Dublin. After graduating in 1849, he became a pupil in his father’s office in Cork.

Deane and his father’s assistant, Benjamin Woodward (1816-1861), became partners in the practice of Deane and Woodward in 1851, and set up an office at No 3 Upper Merrion Street, Dublin. They developed a Gothic style based on the principles laid down by John Ruskin, and their practice played an important role in the Gothic revival in England. Their two most important buildings are the Museum in Trinity College Dublin (1854-1857) and the Oxford Museum (1854-1860).

Woodward died in Lyons in France in 1862. Deane was appointed the first Superintendent of National Monuments in 1875. In 1890, Deane was knighted at the opening of the National Library and the National Museum in Kildare Street.

Deane died suddenly in his office at 37 Saint Stephen’s Green, Dublin, in 1899 and his practice was continued by his son, Thomas Manly Deane.

Deane’s best known works include the Museum Building in Oxford and the National Library and the National Museum in Kildare Street, Dublin, book-ending Leinster House. Four of his buildings are among my favourite works of architecture in Dublin: the Museum Building in Trinity College; No 46-47 Dame Street, built in 1869-1871 for the Crown Life Assurance Co; the Allied Irish Bank, formerly the Munster and Leinster Bank, at 7-10 Dame Street; and the former Kildare Street Club on Kildare Street.

Deane’s cathedral in Tuam was consecrated on 9 October 1878, and Robert Gregg, Bishop of Cork, was the preacher. 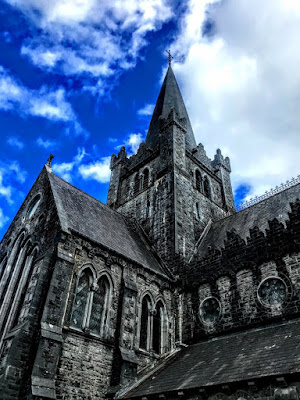 Deane designed this third cathedral in the Irish pointed style. The building is 46 metres (150 ft) long, and the transepts 23 metres (75 ft) wide.

Deane’s intention – never properly fulfilled – was to complete, to his own designs, the work begun in the 14th century by Archbishop William de Bermingham (1289-1310). To the west of the 12th century chancel he built a choir, north and south transepts, a massive central tower and spire, and an aisled nave of five bays with a clerestory.

Deane’s design was inspired in many ways by Saint Canice’s Cathedral, Kilkenny. The nave and choir have a stepped and machiolated parapet. The west door is surmounted by an arcade of seven equal trefoil headed windows, with the central window commemorating Deane. 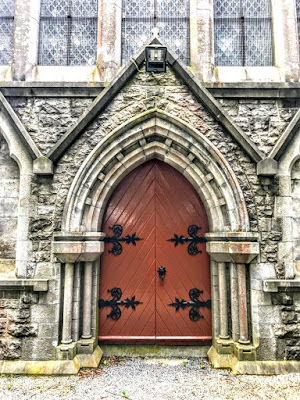 Deane’s cathedral incorporates the 12th century Hiberno-Romanesque arch, the only remaining part of the original cathedral built in the reign of Turlough O’Connor.

The arch is built of red sandstone and has been described as ‘the finest example of Hiberno-Romanesque architecture now extant.’ As this arch has no keystone, the columns supporting the capitals of the arch have a slight inward inclination to bear and support the weight of the structure. This means that the columns are not perpendicular, and the space at the base of the supporting columns is wider than at the capitals.

The arch is 6.85 metres wide at the base and 4.88 metres high. It consists of six consecutive semi-circular arches of elaborately ornamented stonework supported on columns. The capitals are richly sculptured with a variety of interlaced traceries, similar to those on the base of the High Cross of Tuam, and there are carved grotesque faces on the jambs. 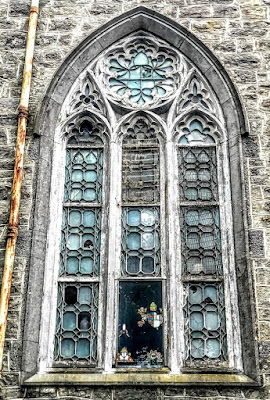 A damaged window in the north transept (Photograph: Patrick Comerford, 2019)

The west window, depicting the Transfiguration, dates from 1913. Other windows depict Biblical figures, including Moses, David, Solomon, Ezra, Malachi and Saint John the Baptist. Solomon and Ezra were chosen because of their role in building and rebuilding the Temple in Jerusalem. A window depicting Christ the King is in memory of the architect Deane.

The oak reredos came from Saint Columb’s Cathedral, Derry. The chancel chairs were presented by Henry Browne, 5th Marquess of Sligo. The Bishop’s Throne, pulpit, font and chapter stalls are made of Caen stone and Irish marble and were donated by Thomas Plunket (1792-1866), Lord Plunket and Bishop of Tuam (1839-1866).

The original organ was the gift of Archbishop Josiah Hort in 1742. But it was severely damaged by damp, and a new organ was bought and installed in 1913. 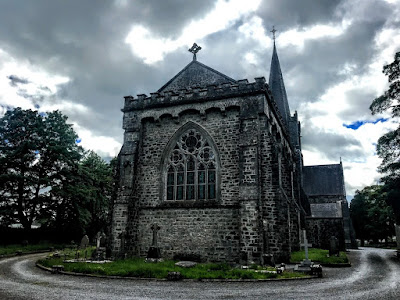 The second cathedral, built by the de Burgo family and Archbishop de Bermingham, became the Diocesan Synod Hall, Library and Registry. The style of what had been the second cathedral in Tuam is English Gothic, which is rare in Ireland. The five-light east window features geometric tracery that includes two quatrefoil windows under a sexfoil centrepiece. This composition bears a striking resemblance to Exeter Cathedral.

The buttresses here on the south and east walls have niches above the first weathering that reputedly held statues of the four evangelists until the Reformation.

The Synod Hall once included stalls said to have once stood in a monastery in northern Italy. After Napoleon destroyed the monastery, the stalls were hidden in a cellar in Turin for 50 years until they were bought in Nice for £3,000 by Edward Joshua Cooper, MP, of Markree Castle, Co Sligo. He placed them in his private chapel in his castle, and presented them to Saint Mary’s Cathedral in 1882. They were sold in 1984 and returned to Italy.

Holy Communion is celebrated at 12 noon on Sundays, and the cathedral is open to visitors on Friday mornings and afternoons during the summer months. 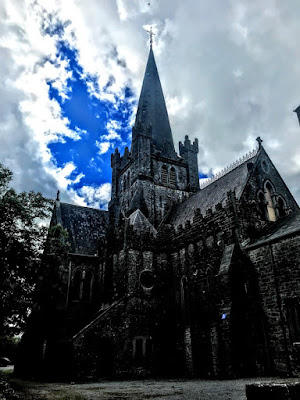