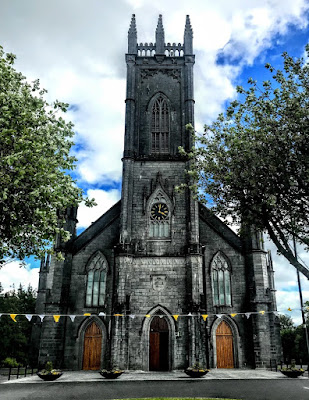 The Cathedral of the Assumption stands at the top of a tree-lined mall off Bishop Street in Tuam, Co Galway (Photograph: Patrick Comerford, 2019)

The principal ecclesiastical sites in Tuam, Co Galway, include Saint Mary’s Cathedral on High Street, at the west end of the town, Temple Jarlath, which is nearby, and the former episcopal palace, the Roman Catholic Cathedral of the Assumption and its campus of church buildings and schools at the east end of the town.

I was in Tuam on Sunday for a funeral in the Cathedral of the Assumption, and spent some time there as well as visiting Saint Mary’s Cathedral, Temple Jarlath and the former episcopal palace.

From start to finish, the cathedral design was carried through by the same architect, Dominick Madden.

Dominick Madden or O’Madden was active in Dublin in the early 19th century and in the midlands and the west from 1817 until the late 1820s. In 1802-1805, he was working on several buildings in the Phoenix Park with Robert Woodgate, architect to the Board of Works. In 1808, he succeeded John Behan as measurer to the Board of Works. But he was dismissed in 1810 for irregular conduct, including the theft of furniture from the Vice-Regal Lodge, and was succeeded by Bryan Bolger.

Following his disgrace in Dublin, Madden moved to the West, where he worked for Christopher St George at Kilcolgan Castle, Co Galway (1814), for Martin Kirwan at Dalgan Park, Shrule, Co Mayo (1817-1822), as well as working at Mount Bellew, Co Galway, and Ballyfin, Co Laois. 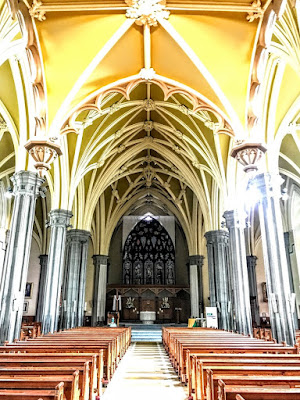 Inside the Cathedral of the Assumption in Tuam, looking east (Photograph: Patrick Comerford, 2019)

However, Madden was dismissed as the architect of Saint Jarlath’s in 1829, apparently after a disagreement over the design of the east end, and Bernard Mullins (1772-1851) of Birr and Dublin was asked to act as a consultant for the completion of the cathedral.

In an anonymous letter to Archbishop Oliver Kelly of Tuam, his nephew and assistant, Peter Madden, accused the building committee and its chair, Martin Loftus, of treating his uncle unfairly and not paying him.

No more works by Dominick Madden are recorded after 1829. One account says he ‘abandoned his Irish practice to become chief engineer of one of the South American republics.’ But by 1832 he was living in Galway, and he died there in March 1837.

After Madden’s dismissal, the architect Marcus Murray of Roscommon was responsible for the ornamentation of cathedral, while the cut-stone work is by his son William Murray. The stucco work is by John Daven of Galway. 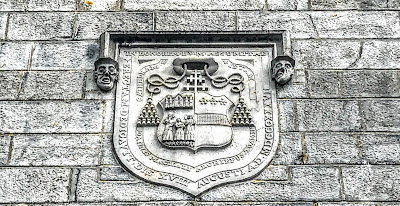 The coat-of-arms of Archbishop John MacHale on the west front of the tower of the Cathedral of the Assumption in Tuam (Photograph: Patrick Comerford, 2019)

The Cathedral of the Assumption is a cruciform-plan gable-fronted cathedral built in 1827-1831, and designed in 14th century Gothic style, with a three-stage tower at the liturgical west end.

Outside, the Gothic plan of the cathedral is emphasised by its rich elaborate Gothic detailw, especially in the great east window, but also in the crenellations of the side chapels, the gable copings of the east gable, and the multiple pinnacles on octagonal turrets flanking the transept gables.

The cathedral has a five-bay nave, a flanking tower, and a rectangular chancel at the liturgical east end flanked by minor chapels.

The copings at the east end gable are openwork screens with quatrefoil details set in squares. The parapets to the blocks flanking the chancel have crenellations and cusped pointed arch openings with cross finials and quatrefoil details at the bases. The bays of the cathedral are divided by more slender buttresses topped by single crocketed finials. 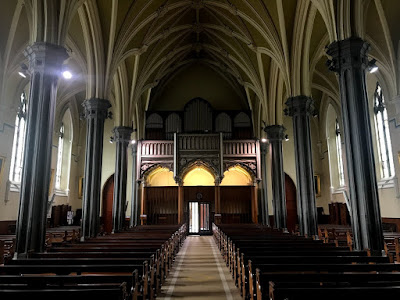 Inside the Cathedral of the Assumption in Tuam, looking west (Photograph: Patrick Comerford, 2019)

Throughout the cathedral there are pointed windows with chamfered surrounds and hood-mouldings, filled with stained glass. The nave and transepts have triple-light windows, and there is a five-light East Window.

The Ascension window in the North Transept (Photograph: Patrick Comerford, 2019)

The side chapels have small two-light windows with cusped heads and with tracery above, and with sculpted hood-mouldings that have finials.

The stages of the tower are defined by string courses. There are octagonal clasping buttresses to the tower, topped by crocketed pinnacles. These pinnacles are linked by openwork screens with cusped pointed arch openings, and the middle pinnacles are supported on moulded corbels.

The tower has Tudor arch recesses at the top stage with cusped detailing, quatrefoils to the spandrels and pointed arch openings with Y-tracery and sculpted heads to the mullioned openings with timber louvers, and hood-mouldings.

The middle stage of the tower has clock faces in oculus-like settings in pointed frames that have four-light windows below with cusped pointed arch heads, and elaborate hood-mouldings with crocketed pinnacles and human head stops.

The doorways at the gable-front have moulded surrounds, hood-mouldings and carved timber double-leaf doors with limestone thresholds.

The doorways at the transepts have Tudor arches with moulded surrounds and label-mouldings, timber battened double-leaf doors and overdoors and they are flanked by stoups. Above the main entrance, Archbishop MacHale’s coat of arms is flanked by two grotesque faces, typical of the creative works and designs of William Murray.

The quality of the stone carving, the consistency of design and the boldness of the detail makes this cathedral outstanding.

The cathedral has pitched slate roofs, and the main roofs have parapets with base moulding and crenellations. 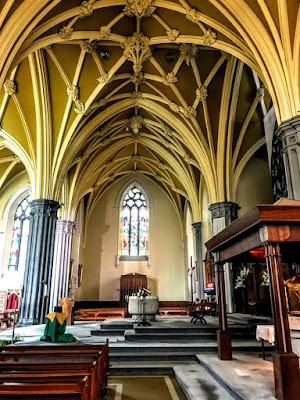 Inside the Cathedral of the Assumption in Tuam, looking towards the North Transept (Photograph: Patrick Comerford, 2019)

Inside, the cathedral displays excellent work in its clustered columns and detailed vaulted ceilings, and it is enhanced by good-quality stained-glass windows.

The interior is made spacious by the elaborate details, including the slender octagonal columns. There are pointed arches, facets, moulded capitals and elaborate ribbed vaulting with decorative bosses and masks at the junction of the ribs. 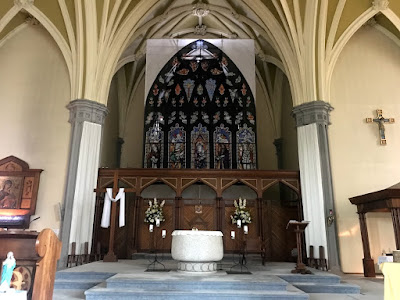 The High Altar area in the Cathedral of the Assumption (Photograph: Patrick Comerford, 2019)

The High Altar area has a carved timber screen and a modern altar. The original marble High Altar was the work of the sculptor Giuseppe Leonardi of Rome, whose other works in Ireland include the monument to Archbishop John Thomas Troy in the Pro-Cathedral, Dublin.

This High Altar was said to be the only item in the cathedral of foreign origin. However, in the wake of the liturgical reforms introduced by Vatican II, it was replaced by a modern altar of Wicklow granite. 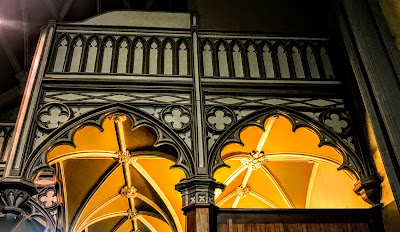 The organ gallery is fronted by a baldachino with Gothic detailing (Photograph: Patrick Comerford, 2019)

At the same time, the elaborate Victorian carpentry by John Burke of Tuam, including the bishop’s throne, communion rails and pulpit, were also removed.

However, Burke’s wood-carving skills can still be seen in his organ loft which survived. The organ gallery is fronted by a baldachino with Gothic detailing. 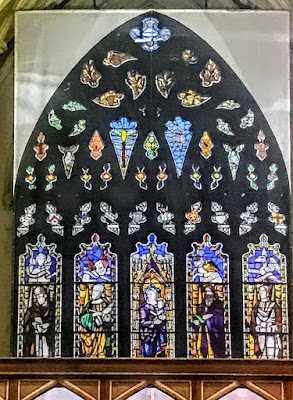 There are stained-glass windows throughout the nave, and the East Window, dated 1832, is particularly elaborate. The East Window and other windows are the work of the Dublin-born artist Michael O’Connor (1801-1867).

O’Connor moved to England in 1842, living first in Bristol and from 1845 on in London. He had a successful career in England, working with some of the leading architects of the day, including AWN Pugin and William Butterfield.

The East Window is currently in Germany for repairs and restoration work. But a banner in front of the tracery shows details of the window, with the Virgin Mary in the centre flanked by the four evangelists, Saint Matthew and Saint Mark on the left and Saint Luke and Saint John on the right.

In the 10 compartments above are the coats of arms of the Archbishop of Tuam and families who were benefactors of the cathedral. They are, from left, St George, Kirwan, Bellew, the Marquis of Sligo (Browne), the Diocese of Tuam, Archbishop Kelly, the Earl of Shrewsbury (Talbot), Handcock, Newell and Burke.

Two modern stained glass transept windows of Saint Jarlath and Saint Patrick were installed in 1961. They are the work of Richard Joseph King (1907-1974), manager of the Harry Clarke studios in Dublin from 1935 until 1940, when he set up his own studios in Dalkey.

The Stations of the Cross were painted in Italy in the early 19th century. Archbishop John MacHale bought the paintings for £200 and they were erected in the cathedral in 1861. The frames are of oak and gilded.

Some restoration work was carried out on the Stations of the Cross in 1925, and a major restoration and conservation project was carried out in 1998-1999, when the paintings were put on new stretchers, relined, repaired, cleaned and varnished. The frames were repaired, missing and decayed pieces were replaced, and they were treated, cleaned and regilded. The restored stations were rededicated by Archbishop Neary on 31 October 1999. 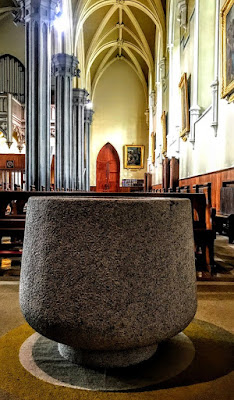 The baptismal font and the north aisle in the Cathedral of the Assumption (Photograph: Patrick Comerford, 2019)

A framed oil-on-canvas painting of the Assumption of the Virgin Mary dates from 1690 and is the work of Carlo Maratta (1625-1713) of the Bolognese school. The painting was bought in Rome in 1842 and was presented to the cathedral in 1884 by Sir William Gregory, husband of Lady Augusta Gregory of the Abbey Theatre. 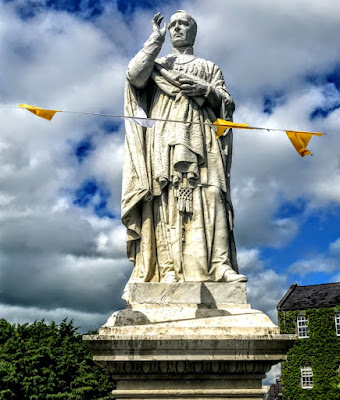 Outside, the cathedral is flanked by statues by Sir Thomas Farrell of Archbishop John MacHale and William Burke of Tuam, whose endowments enabled the Sisters of Mercy to establish their convents in the cathedral precincts. 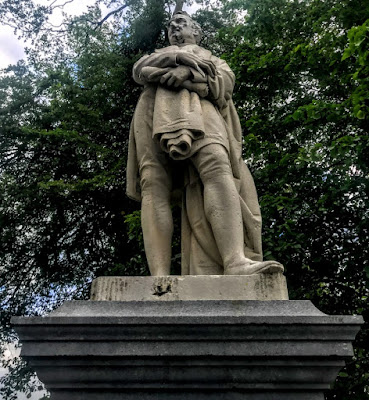 Interestingly, the statue of Burke was modelled by his Tuam-born namesake, Thomas Henry Burke, later the Under Secretary of Ireland or most senior civil servant. Burke was murdered in the Phoenix Park, Dublin, in 1882, with the Chief Secretary for Ireland, Lord Frederick Cavendish. 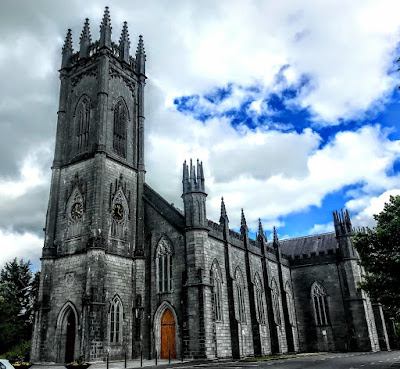 The Cathedral of the Assumption in Tuam, Co Galway, seen from the south-west (Photograph: Patrick Comerford, 2019)