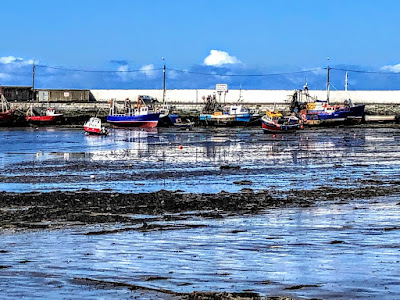 Blue skies and blue waters at the harbour in Skerries this afternoon (Photograph: Patrick Comerford, 2020)

I have worked for days on end, so I thought I’d take two days off in Dublin, and come up from Askeaton last night following one of the quietest Saint Patrick’s Days I have ever experienced.

In the Church Calendar, today is Saint Joseph’s Day, but apart from people with the name Joseph or Joe, I imagine this saint’s day did not figure on the radar of many people.

I was working today in advance on some postings with preaching and liturgical resources for clergy and readers in the Dioceses of Limerick and Tuam. But I took a few hours off early in the afternoon to go for a walk on the beaches – both the North Strand and the South Strand – and around the harbour in Skerries in north Co Dublin.

It was three months since I had last been for a walk in Skerries – on a wet, blustery winter’s afternoon in mid-December, a week before Christmas. How much has changed in Ireland, and across the globe, since then! 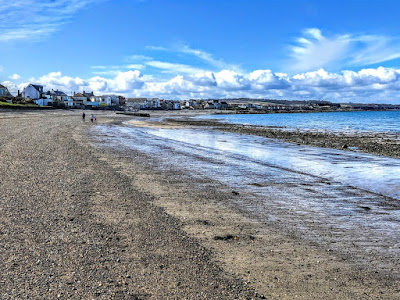 The tide was out at the North Strand in Skerries this afternoon (Photograph: Patrick Comerford, 2020)

But it was a bright sunny afternoon today, with blue skies and warm sunshine, with the spring sun sparkling and shimmering on the harbour and on the sea.

The tide was out, and two of us had an opportunity for a longer walk than we had three moths ago.

After buying The Guardian and The Irish Times in Gerry’s, two of us set off for our brisk stroll along the North Strand, around the Harbour and then Red Island, and back down the South Strand, before stopping for our coffee. 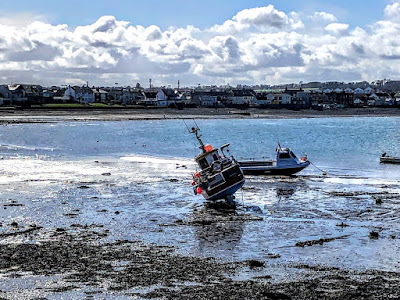 A peaceful afternoon at the Harbour in Skerries (Photograph: Patrick Comerford, 2020)

I am little taken aback by how few people are paying attention to the guidelines on social distancing. People are still stopping to talk to one another, children are out playing on the sand and on the pathways, the queues at the shops that are open are good excuses for social conversation …

It’s all a sign that we appreciate life in all its fullness, and that we want things to get back to normal as quickly as possible.

Hopefully, when this crisis passes – as it will – there will be long sunny days and good opportunities for lengthy walks on beaches, wherever I am. 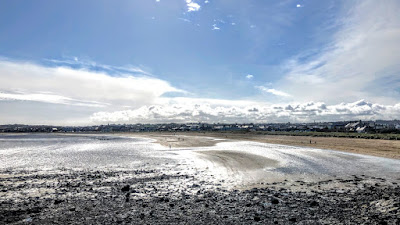 The long stretch of sand on the South Strand in Skerries this afternoon (Photograph: Patrick Comerford, 2020)