Mount Melleray and
the return of Cistercian
monasticism to Ireland 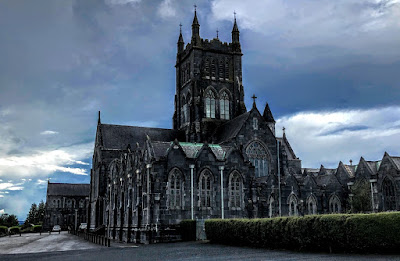 During the closing days of the first stage of this year’s summer ‘Road Trip,’ I stayed near Mount Melleray. Throughout my childhood years, I was very familiar with Mount Melleray, which was the neighbouring farm to my grandmother’s farm at Moonwee.

As children, we regularly traipsed through the fields at Moonwee, across brooks and stiles, to the farm and monastery in Melleray, feeling free to explore the abbey churches, buildings and farmyard, and to silently listen to the monks singing the daily offices.

I had only been back to Mount Melleray a few times since childhood, and 20 years ago I decided against the idea of a pre-ordination retreat there in 2000. So, it was good to return to Melleray at the end of last week and to reconnect with a spiritual tradition and monastic buildings I had once been familiar with over half a century ago. 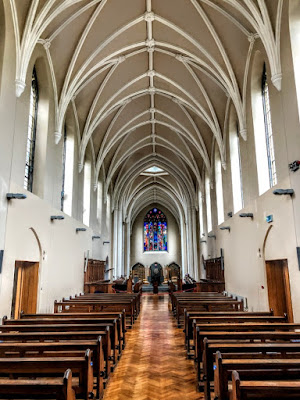 Mount Melleray Abbey is a community of Cistercian or Trappist monks on the slopes of the Knockmealdown Mountains, about 6 km north of Cappoquin, Co Waterford. It was founded in 1833 on land donated by the Keane family of Cappoquin House at a nominal rent.

The abbey has been celebrated in Seán Ó Ríordáin’s poem ‘Cnoc Mellerí’ in Eireaball Spideoige (1952). James Joyce mentions Mount Melleray in ‘The Dead,’ the final short story in Dubliners (1914), in which the monks of Mount Melleray are noted for their exceptional hospitality and piety.

The Cistercian order was founded as branch of the Benedictines by Saint Bernard of Clairvaux in the 12th century, and the Trappists date from the mid-17th century. After the French Revolution and the suppression of monastic houses in France, some dispossessed Trappist monks arrived in England in 1794 and established a community in Lulworth, Dorset. 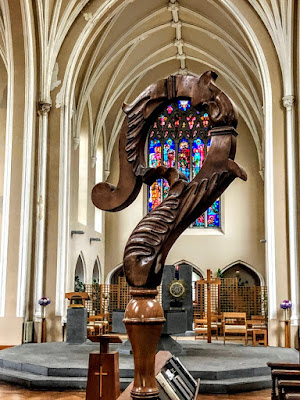 The symbol of the abbot’s crozier in the choir stalls Mount Melleray Abbey (Photograph: Patrick Comerford, 2020)

Following the restoration of the Bourbons, these monks returned to France in 1817 to re-establish the ancient Melleray Abbey in Brittany. During the July Revolution of 1830, the monks were forced to flee France once again and were sent by Dom Antoine, Abbot of Melleray, to found an abbey in Ireland.

The monastery was founded on 30 May 1832 at Scrahan, Cappoquin, by a group of Irish and English monks from Melleray, and who had come to Ireland under the leadership of Father Vincent de Paul Ryan.

After many efforts to locate his community, he accepted an offer from Sir Richard Keane of Cappoquin to rent 500 acres of mountain land, and this later increased to 700 acres. 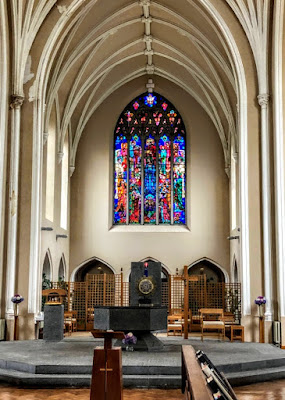 The high altar and the sanctuary in the monastic church in Mount Melleray (Photograph: Patrick Comerford, 2020)

On the feast of Saint Bernard 1833, the foundation stone of the new monastery was blessed by William Abraham, Bishop of Waterford and Lismore. It was named Mount Melleray in memory of the motherhouse. The monastery became an abbey in 1835, and Father Vincent, who was unanimously elected abbot. He received his abbatial blessing from Bishop Abraham, the first abbatial blessing in Ireland since the Reformation.

A small group of monks was sent from Mount Melleray to England in 1835 to found Mount Saint Bernard Abbey, near Coalville, Leicestershire. Abbot Vincent vigorously undertook the work of completing the abbey, but died on 9 December 1845.

His successor, Dom Joseph Ryan, resigned after two years, and Dom Bruno Fitzpatrick became abbot in September 1848. Dom Bruno consolidated the initial work and the abbey and also devoted his energy to missionary work. During its earlier years, the monastery was directly subject to the bishop of the diocese, but in1848 it came under the jurisdiction of the general chapter.

The seminary at Mount Melleray began as a small school formed by Abbot Vincent in 1843, and was developed by Abbot Bruno and his successors.

When the Scottish essayist Thomas Carlyle visited Dromana House near Cappoquin in 1849, he also visited Mount Melleray and described the abbey in some detail, noting particularly the huge vats of ‘stir-about’ or porridge the monks prepared for the large number of Famine victims.

Abbot Bruno died in 1893, and was succeeded by Dom Carthage Delaney, who was blessed in 1894 and presided over Mount Melleray for 13 years. His successor, Dom Marius O’Phelan, was solemnly blessed by Bishop Sheahan of Waterford in 1908.

Dom Marius is credited with resuming the building programme at Mount Melleray in 1925. He bought the great cut limestone blocks from Mitchelstown Castle, 42 km west, after it was burnt by anti-treaty republicans on 12 August 1922. The owners of Mitchelstown Castle dismantled the ruins in 1925 and the stones were transported by steam lorry in two consignments a day over a five-year period.

Dom Marius died as the abbey was being laid out, and his successor, Dom Celsus O’Connell, continued the monumental task. The monks ended up with far more stones than they needed and these were eventually stacked in fields around the monastery.

In March 1932, the community of English Cistercian nuns of Stapehill, England, moved to Saint Mary’s Convent, Lismore, which was bought and prepared for them by the monks of Mount Melleray.

The public church and the monastic church are the main elements of the church building project undertaken by Dom Celsus, and building work began in January 1935.

The words of the canticle Magnificat carved on the wooden screen at the west end of the monastic church in Mount Melleray Abbey (Photograph: Patrick Comerford, 2020)

The monastic church, where monks of Mount Melleray celebrate the Divine Office every day, was completed and solemnly blessed on 26 November 1940. Later, a high altar and some 20 lesser altars – all in marble and the gifts of benefactors – were installed, and a magnificent stained-glass window was erected behind the high altar.

The Abbey Church is in Gothic style and cruciform in plan. Although extended, it follows mainly the lines of the original chapel built by the first community.

In the Cistercian tradition, a massive crucifix was suspended over the nave and contained relics of Saint Bernard and many Irish saints. However, this was removed during the post-Vatican II liturgical reforms. 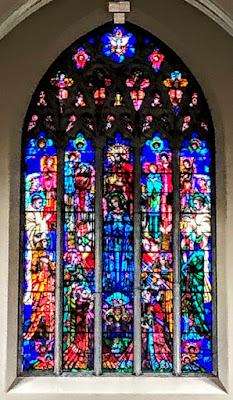 The east window is the work of the Harry Clarke studio. The central panel represents Christ the King crowning the Virgin Mary at the Assumption. Each evening at the Office of Compline, the lights of the Church are extinguished and, according to Cistercian tradition, the figure of the Virgin Mary is illuminated for the singing of the Salve Regina.

To the right of the central panel are Saint Catherine of Alexandria and Saint Carthage of Lismore; to the far right are Saint Robert, one of the three founders of the Cistercian Order, and Saint Patrick of Ireland.

To the left of the central panel are Saint Brigid of Kildare and Saint Columba; to the far left are Saint Bernard of Clairvaux, Doctor of the Church and the founder of the Cistercians, and Saint Malachy of Armagh, who invited Saint Bernard to send Cistercian monks to Ireland, leading to the foundation of Mellifont Abbey in 1142.

At the west end of the church, the words of the canticle Magnificat are carved in large letters on a wooden screen. 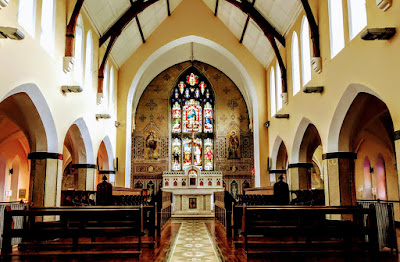 The public church was consecrated at the same time as the monastic church, with Dom Benignus Hickey, Abbot of New Mellifont, consecrating the High Altar.

The interior of the public church has five bays consisting of aisles on either side and double lancets above. The sanctuary is decorated in mosaic, both in the nave and the aisles. The walls surrounding the side aisles are decorated with angels.

The walls of the sanctuary have the instruments of the Passion in quatrefoils on the lateral walls, the east wall has images of the Sacred Heart on the north side and Saint Joseph on the south side, each with a monogram in the quatrefoil beneath. 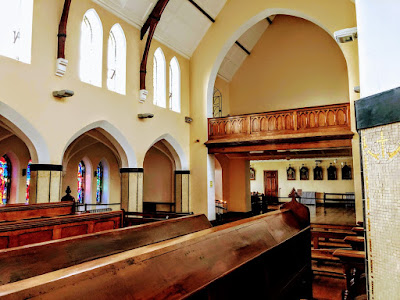 The east window of the public church is in two levels, above. In the central panel is the Assumption of the Virgin Mary with angels. Below, from left to right, are Saint Brigid, Saint Malachy of Armagh, who introduced the Cistercians to Ireland, Saint Bernard of Clairvaux, founder of the Cistercians, and Saint Patrick.

The seven main panels of this window were originally in the east window of the old Monastic Church.

Many of the stained-glass windows in the side aisles are also the work of Harry Clarke or the Harry Clarke Studios in Dublin. 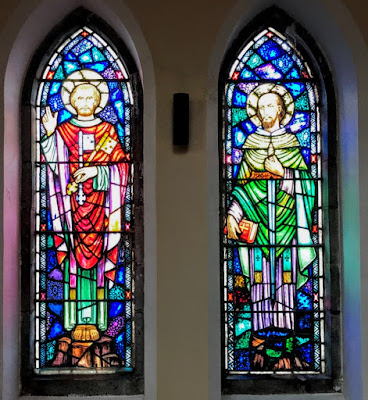 Saint Peter and Saint Paul in a two-light lancet window by the Harry Clarke Studio in the public church in Mount Melleray Abbey (Photograph: Patrick Comerford, 2020)

The Abbot of Mount Melleray, Dom Eamon Fitzgerald, was chosen as the first Irish Abbot General of the Cistercian Order in 2008. Dom Richard Purcell was inaugurated as the new abbot of Mount Mellary in 2017. He was previously Abbot of Mount Saint Joseph Abbey, Roscrea, and had already received the abbatial blessing in 2009.

In the past, Mount Melleray was involved in founding New Melleray Abbey, near Dubuque, Iowa, Mount Saint Joseph Abbey, Roscrea, Co Tipperary, and the Southern Star Abbey in New Zealand.

Today, about six or eight men live in the community at Mount Mellary. Two died within the past two years, and one is living as a hermit near Saint Mary’s Abbey of Cistercian nuns in Glencairn, near Lismore, where he celebrates Mass once a week for the sisters. 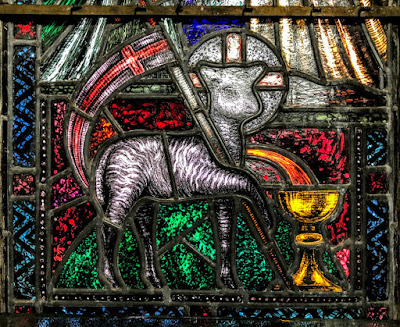 The Lamb of God in a Harry Clarke window in the public church in Mount Melleray Abbey (Photograph: Patrick Comerford, 2020)