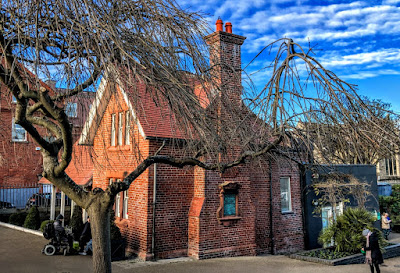 The redbrick Victorian gate lodge at the entrance to the People’s Park in Dún Laoghaire (Photograph: Patrick Comerford, 2020)

During my walk around Dún Laoghaire earlier this week, my imagination was caught particularly by the redbrick Victorian gate lodge at the entrance to the People’s Park on the edge of the town centre, between Glasthule and the seafront.

The People’s Park is a short stroll from Dún Laoghaire harbour and it is popular with local people and visitors alike. It first opened to the public in 1890, and the park retains many examples of late Victorian architecture, including the Gate Lodge, the tearooms, fountains, and a bandstand with original gaslight standards.

The 2 ha park was developed near the end of the 19th century by the Kingstown town commissioners in the formal Victorian style, with wrought iron railings, stone walls, large gates and a typical Victorian bandstand. The new park, on the site of a former quarry and an earlier Martello tower, opened on 29 September 1890.

The park was planned and designed by the architect John Loftus Robinson assisted by William George Strype (1847-1898), the Kingstown township engineer. The park development involved many contractors, including George Dixon, who built the Gate Lodge for £700 18s 11d. 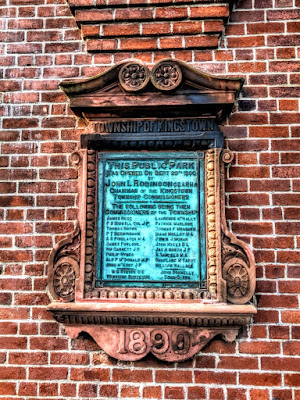 The architect John Loftus Robinson (1848-1894) was born in Dublin, the son of John Joseph Robinson (1819-1895) and Mary Theresa Robinson. His father owned a tailoring and drapery business at 13 College Green, Dublin, in the 1850s; he later lived in Booterstown and was a member of Blackrock Town Commissioners.

John Loftus Robinson received his architectural training in the office of Edward Henry Carson. From an early stage, he was interested in sketching and drawing mediaeval English and Irish architecture, and many of his drawings were published in The Architect.

Robinson had his own office by 1872 at 198 Great Brunswick Street, where he continued to practise until he died in 1894. He was a frequent exhibitor at the Royal Hibernian Academy, and also exhibited at the Dublin Exhibition of Arts (1872), the Irish Exhibition of Arts and Manufactures (1882), and the Cork Industrial Exhibition (1883).

Robinson’s commissions were mainly for Roman Catholic churches and religious houses in the Dublin area, though he did some commercial and domestic work. He collaborated with Thomas Henry Longfield in the mid-1870s, but never had a business partner. However, his pupils and assistants included Joseph Kelly Freeman, George Luke O’Connor and Samuel Reddy.

Robinson played an active part in public life, and he represented Trinity Ward on Dublin City Council. An ‘ardent Parnellite,’ he was an active member of the National Liberal Club in London and was secretary to the Nationalist Party on Dublin Corporation. He also chaired Kingstown Township Commissioners for many years, and as chair was largely responsible for the creation of the People’s Park.

Robinson was a keen amateur photographer, and for 15 years he accompanied the London Architectural Association excursions as the honorary photographer, when he ‘was the life and soul of these excursions,’ and he organised the excursion to Ireland in 1888.

Robinson died of typhoid fever on 12 October 1894. His funeral in Glasnevin Cemetery was attended by Archbishop Walsh, the Lord Mayor of Dublin, several MPs, and members of Dublin Corporation, the Royal Hibernian Academy, and ‘nearly every leading architect in Dublin.’ When he died, George Luke O’Connor carried on his practice.

His widow, Mary Thomasina Josephine (née Ryan), died 1908 at the age of 57. His son, John Joseph Robinson, was also an architect.

The restrained Victorian layout of the People’s Park was compromised over the years, with the proliferation of new pathways and other introductions. Because the site had once been a quarry, the poor ground conditions caused subsidence and the fabric of some buildings was damaged.

But in recent years, the park has been restored faithfully to its original layout, re-establishing the main north-south axis that connects and highlights the main features, including the fountains, the bandstand and the tearooms, as well as the perennial borders and the manicured lawns.

The Pavilion, where we had coffee, and the Gate Lodge form the gateway to the park from George’s Street. Both buildings have received substantial underpinning, restoration and sensitive extensions to bring them into the 21st century as quality park facilities. The attractive Victorian gate lodge, once a gardener’s residence, is now used as offices. 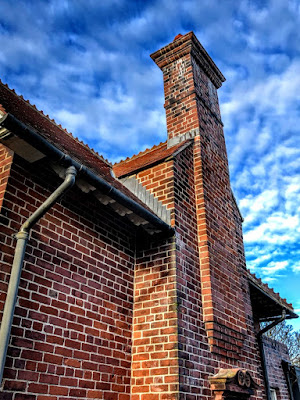 The Gate Lodge, with its original brickwork, has been restored sensitively in recent years (Photograph: Patrick Comerford, 2020)